Round 3: Melyssa Mansur vs. Robert Looby 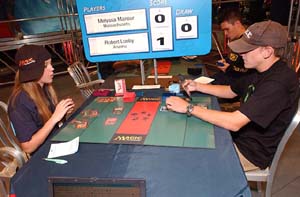 Melyssa is one of the few girls in this tournament – her sister Danielle, who's only nine played in the grinders yesterday. When asked for a quote, she said, "I'm a girl!" Melyssa's whole family is here to cheer her on. She was in JSS last year as well.

Robert said, "I don't belong here – I'm 0-2! You'd figure they'd pick people who actually win a little." He seemed dismayed at his feature match. This is also his first big tournament – he drove here from Tucson with both his parents.

Melyssa led with a Karplusan Forest and a Basking Rootwalla. Robert answered with a Taunting Elf of his own, but opted not to block when Melyssa attacked on her next turn. Melyssa's next creature was a face-down morph, and when she attacked with the Rootwalla, Robert blocked with a Wirewood Herald.

Robert passed his third turn without playing a creature, and Melyssa revealed her morph to be Skirk Marauder. When she attacked with it, Robert played Caller of the Claw as an instant, and used the Bear to block the Marauder.

On Melyssa's next turn, she played a Phantom Centaur. Robert countered with a Wellwisher and an Elvish Soultiller. Melyssa casually chewed her mint gum and played a Violent Eruption, indicating that she'd split the damage to kill the Wellwisher, the Caller of the Claw, and deal a point to Robert's face.

After Melyssa swung through with the Centaur, Robert was left at 15. Going all out, Melyssa played a Basking Rootwalla to round out her army and leave her with no cards in hand.

Melyssa attacked with the Centaur, and Robert blocked with his Wirewood Herald. He activated his Timberwatch Elf and put the Herald in the graveyard, but the ever-vigilant judge showed him how the Herald didn't actually die (due to the four elves in play). Melyssa sacrificed her Wooded Foothills, looking for more options now that she was left with only one creature, but didn't find any.

Robert attacked with his elven army, and Melyssa stuck the Centaur in front of the Elvish Soultiller. Seven damage still broke through, and Melyssa just couldn't draw any more creatures. She capitulated soon after.

Melyssa opted to play first, quite an advantage in this aggressive matchup. She led with a Grim Lavamancer, and when Robert had no first-turn play, she added a Wild Mongrel to her side of the table. 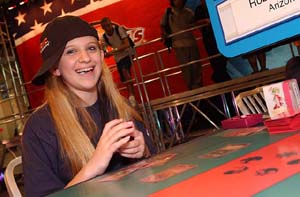 Robert's first creature was a Wirewood Hivemaster. He looked dismayed as Melissa discarded Violent Eruption and paid the madness cost, killing his Hivemaster and dealing three damage to him. Melyssa swung with both the Mongrel and the Lavamancer and smiled at Craig, the photographer. "You did that to me last year!" she joked as he took pictures of the match.

Robert surveyed his cards despondently. With a sigh, he played a Seeker of Skybreak, which Melyssa promptly killed with a Firebolt. Robert was at two, and when he missed his third land drop for three turns in a row, the game looked dismal.

Melyssa attacked with everything, hoping to end the game, but Robert was holding a clutch Moment's Peace, allowing him to survive for at least one more turn. Melyssa just drew and smiled, as she showed Robert the topdecked Firebolt.

Both Melyssa and Robert remain unfazed by the Nationals Feature Matches setting up right next to them. "Go, Your Move Games!" Melyssa's dad calls to Dave Humpherys.

Melyssa led with a Llanowar Elves and a Wild Mongrel, repeating the strong offense of her previous game, but this time, Robert was able to keep up with a Wellwisher and an Elvish Vanguard. Melyssa used a Firebolt to toast the Vanguard, but Robert then played a Phantom Centaur of his own to round out his offense.

Melyssa tossed down a Goblin Sharpshooter and went to 19 from her Barbarian Ring, one of her two sources of red mana. When Robert attacked with the Centaur, Melyssa stuck a Llanowar Elf in front of it.

Melyssa swung back with Wild Mongrel, and discarded a Violent Eruption to pump the Mongrel. She divided the damage skillfully – one damage to the Wellwisher, one to the Centaur, and two to Robert's head. She then used the Sharpshooter to finish the Centaur off, and the game's momentum swung dramatically back in her favor. 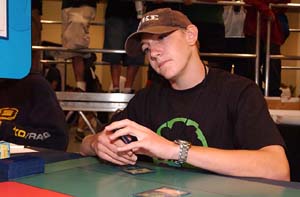 Robert played a Wirewood Herald, which Melyssa quickly killed, and went to find a Caller of the Claw. With one Bear in play, things looked much less grim for Robert. But Melyssa just kept finding burn spells, as the Bear died to a Firebolt and the Caller met the business end of a Volcanic Hammer.

In three turns, Robert didn't find any cards, or at least, any cards he wanted to play. When Melyssa attacked again, Robert played a Caller of the Claw, which blocked the Wild Mongrel. At the end of Robert's turn, Melyssa shot him with both her Sharpshooters, then flashed back Firebolt for the win.