Round 3: Menno Dolstra vs. Sigurd Eskeland 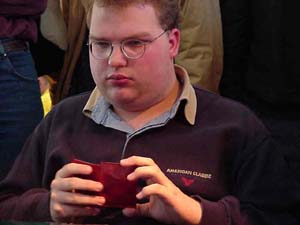 Menno DolstraThis is a case of the student coming up against the master as Menno Dolstra attended the first ever Magic Summer Camp in 1999 where Sigurd Eskeland was one of the teachers along with Randy Buehler. Dolstra qualified for Pro Tour London that same year and has Grand Prix top 8's and a top 32 at Pro Tour Los Angeles to his credit. Eskeland is best known for conquering the "Lin Sivvi" Pro Tour of New York 2000 with a Rising Waters deck.

Menno Dolstra – "For the record, my deck is terrible. Just in case anybody asks why I'm playing such horrible cards."

Game 1 didn't start with too much excitement until Eskeland summoned a Thought Devourer and then Soul Scourge in quick succession. A Pulsating Illusion from Dolstra looked to hold things at bay, especially as he had a Hydromorph Guardian to protect it. A good thing as Eskeland had another Soul Scourge to bite a chunk out of the Dutchman's life total.

Dolstra started to fight back with a Rampant Elephant and then a Crashing Centaur. The virtually unblockable elephant beat a path along the ground while Dolstra held up the air with the Illusion.

A Treetop Sentinel would have held off the elephant except Dolstra was able to pitch a couple of lands to the Centaur and counter it with Circular Logic.

This allowed Eskeland to drop the Cabal Torturer he'd brought back with a Gravedigger after being forced to discard it earlier to the Thought Devourer. Once the Torturer became active the game was effectively over as it could just kill the Illusion in response to Dolstra discarding a card to it. Then there was nothing to stop Eskeland's squadron of fat fliers ending the game in quick fashion.

"It was almost close because I didn't draw that second swamp for a million turns," Eskeland said.

"But you did," Dolstra replied mournfully.

An early Peek from Eskeland revealed a handful of blue cards, an Afflict, a Faceless Butcher and only one forest to go with the island Dolstra had in play. Dolstra found the swamp in time and used it to Afflict Eskeland's Cabal Torturer.

Dreamwinders on either side started racing and Eskeland ripped a Balshan Collaborator and the Butcher out of Dolstra's hand with Last Rites. Dolstra followed with a Rites of his own, but it was off the green variety and did nothing more exciting than trade a forest in his hand for a second swamp.

After Eskeland gained massive card advantage off a Breakthrough Dolstra tried to fight back by using Churning Eddy to gain some tempo advantage. It allowed him to get through for six before the Dreamwinders traded in the red zone.

Dolstra tried to keep up the pressure with a Nantuko Blightcutter as Eskeland went even more cards up with a Concentrate.

All the cards didn't help as Eskeland's Thought Devourer was countered by a Circular Logic and he couldn't stop the pro-black Blightcutter. 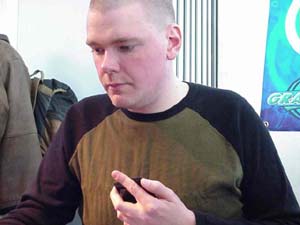 Sigurd EskelandEskeland -- "Think I have to make you go first as your mana's so bad."

A first turn Careful Study gave Dolstra a difficult choice before he discarded a Cephalid Sage and Gravedigger. He came out with a turn 3 Krosan Avenger but a Torturer from Eskeland combined with an Aether Burst on Dolstra's turn 4 Dreamwinder switched back the tempo.

A Morbid Hunger from Eskeland dealt with the Dreamwinder permanently and allowed the Norwegian to take the offensive with his own Dreamwinder and a Crypt Creeper. With a Torturer in support Eskeland looked in good shape as again Dolstra didn't quite have the same caliber of cards.

A Peek revealed Dolstra had a Rabid Elephant waiting to come down and a Butcher he didn't have the swamps to play. The elephant never appeared due to a Syncopate and Eskeland started to turn the screw as a Soul Scourge came into play and dropped Dolstra to a precarious four life.

A Churning Eddy kept Dolstra alive for a turn, but only a turn. The Magic gods had simply not gifted him a deck in the same league.