Round 3: Murray Evans vs. Jurgen Hahn 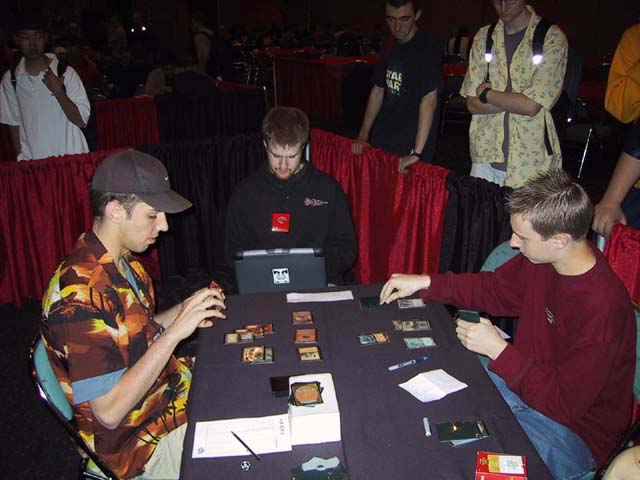 Jurgen Hahn was on the Canadian National Team in 1999, and he went 6-0 during the Extended portion of Worlds. Murray "The Mauler" Evans is also no stranger to the National Team. Last year he made it to the finals, where he lost to Ryan Fuller. What's more impressive is that he achieved this at the age of thirteen. He followed up that performance by contributing to Team Canada's second place finish at Worlds.

Jurgen won the roll, and chose to play first. He started off with a first turn Bloodfire Dwarf, and played Phyrexian Battleflies on the following turn. The Dwarf continued to attack, and Jurgen's army was now three strong thanks to a Caldera Kavu. Murray then played his first creature of the game in Phyrexian Rager. The Kavu and Battleflies attacked and were not blocked, dealing four total damage. Murray's Rager attacked back, and it was obvious that Evans was mana screwed. He discarded a Haunted Angel, and ended his turn. Jurgen took full advantage of Murray's misfortune, sending his entire army into the Red Zone.

Murray found a fourth land, and used Hobble to stop the Caldera Kavu. Still, he was far from safe. Jurgen summoned Pouncing Kavu with kicker, and sent it directly into combat. Evans chose to chump block it, leaving him with no creatures on the table. However, he did have a second Hobble for the Pouncing Kavu, as well as a Benalish Trapper. It seemed that Murray would have the board stabilized once his Trapper became active. However, Jurgen was waiting with Terminate, and he also summoned Viashino Grappler. Coalition Honor Guard came out on Murray's side, but it Jurgen still attacked with his team. The Guard blocked the Grappler, and Jurgen sacrificed the Dwarf to kill off the 2/4 blocker. He then summoned Goblin Legionnaires.

Evans continued to stop Jurgen's attack, as he played Shackles on the Battleflies, and summoned Riptide Crab. This finally prevented Jurgen from attacking for damage, although he did play Putrid Warrior. Marsh Crocodile was then summoned by Murray, who played Razorfoot Griffin on the same turn. Grave Defiler then cast by Jurgen, and it revealed three lands and a Soul Burn. The Riptide Crab was now replayed, and Jurgen used Ravenous Rats to force Murray to lose the only card left in his hand. Murray responded by playing Jilt on the Goblin Legionnaires, and Jurgen then summoned a Shivan Zombie.

The hand attack continued, as Jurgen used Bog Down to force Murray to lose the plains in his hand. He also replayed the Legionnaires. Murray untapped, and used Sawtooth Loon to dig into his deck, bouncing back the Riptide Crab before the card drawing effect took place. Jurgen then thought on his turn, and attacked with all his creatures. Loon blocked the Rats, Marsh Crocodile blocked Grave Defiler, and Razorfoot Griffin blocked Putrid Warrior. Murray then used Rushing River with kicker to bounce back the unblocked Legionnaires and Shivan Zombie. The Defiler was regenerated, and Legionnaires was sacrificed to deal fatal damage to the crocodile. Ravenous Rats and Putrid Warrior headed to the graveyard, and Shivan Zombie came back into play.

Murray went on offense, dealing two with the Loon. He then played Galina's Knight, but had no creature on the board that was capable of blocking the Shivan Zombie. Jurgen went to work rebuilding his army with a Degavolver with black. On Jurgen's next turn, Murray realized he couldn't win, and conceded. 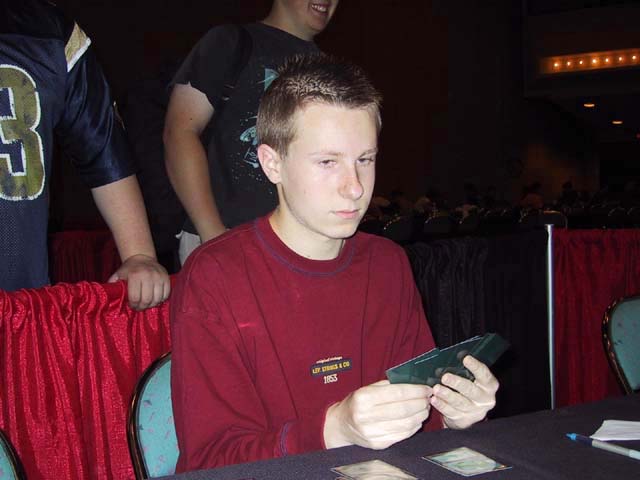 Murray went first this time, and started off with a Tidal Visionary. Jurgen had his own first play, as he summoned Phyrexian Battleflies. The Visionary attacked for a point of damage, and Jurgen continued his curve with a Putrid Warrior. The Battleflies and Warrior attacked, dealing four damage total. The Warrior's loss of life ability was also used. The Visionary then swung back, and Murray played Coalition Honor Guard to stabilize the ground. Jurgen answered back with his own Honor Guard, and Murray played Razorfoot Griffin. Jurgen then played Bog Down with kicker, forcing Murray to lose two lands and a Soul Link.

This left Murray with only one card in hand, but Jurgen still needed to eventually find a way to stop the Griffin. It attacked for two on the next turn, and was joined in the air by a Faerie Squadron with kicker. Both attacked for five damage on the following turn, and Murray summoned a Cavern Harpy that he had just drawn. It bounced back a Tidal Visionary, which was immediately replayed. Jurgen now attacked with the Legionnaires, Putrid Warrior, and Coalition Honor Guard. The Harpy blocked the Legionnaires, and went back to his hand after damage went on the stack. Jurgen couldn't use one of the Legionnaires' abilities due to the Honor Guard in play. He summoned a Caldera Kavu, and ended his turn.

The aerial assault continued on Murray's side of the table, and Jurgen's Battleflies chump blocked the Squadron. Jurgen then attacked back on the ground with all his creatures. Honor Guard blocked Caldera Kavu, and Cavern Harpy blocked Putrid Warrior. The Kavu was pumped to 4/4, but Murray used Jilt to bounce it back and save the Honor Guard. However, Murray forgot that Jurgen had an Honor Guard in play. The Harpy blocked and killed the Warrior before bouncing back, and Jilt was used to save Murray's own Honor Guard in combat..

The Griffin and Squadron attacked yet again, and the Honor Guard was replayed. Jurgen used Soul Burn to eliminate Murray's Honor Guard, and a second destroyed Faerie Squadron on the following turn. Still, Murray nullified most of Jurgen's offense, and Razorfoot Griffin came through for the win. 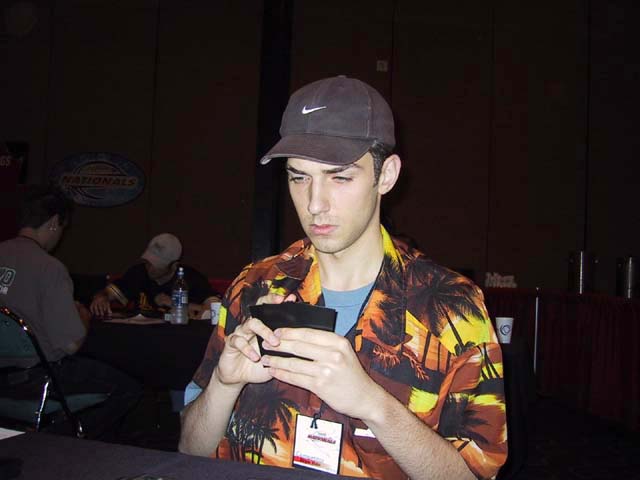 Ravenous Rats was played on turn two by Jurgen, which caused Murray to discard a swamp. The Rats attacked on the following turn, and was joined by Caldera Kavu. Murray then summoned a Riptide Crab, but Jurgen's Kavu was still free to attack. It dealt three damage, and Jurgen played Putrid Warrior. Faerie Squadron was then played without kicker by Murray, who then summoned Silver Drake, bouncing the Squadron right back. The Kavu attacked for damage again, and Jurgen followed up strong with a Degavolver with both kickers.

Murray then untapped, and played Hobble on the Degavolver. Silver Drake attacked through the air for three damage, and Jurgen answered back, attacking with Putrid Warrior and the Kavu. A Shackles was used by Murray to nullify the Kavu, and the Drake attacked for another three points of damage. Jurgen thought for a bit, and played Cursed Flesh on his Putrid Warrior. This made it unblockable, and it was actually dealing two points of damage a turn thanks to its life loss ability. Murray then attacked with the Drake and the Crab, and Jurgen blocked the Crab with Degavolver, which allowed Murray to draw a card. The unblockable Warrior attacked again, and Soul Burn followed to finish up the game and the match.