Round 3: Nicolas Labarre vs. Abraham Snepvangers 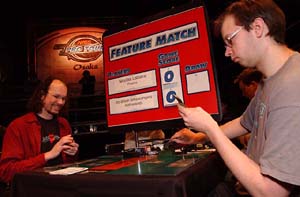 This round feature two European players that are generally well known for their eclectic and surprising deck construction. Bram Snepvangers complained that he was unable to find a suitable combo deck – his Confessor-Lich deck has too many problems. So he decided to got for a variant of the most popular deck in the format, Mono Black control. Labarre has also opted for a lesser played mainstay, a Blue Black Pyschatog/Upheaval deck.

Game 1 sees the Dutchman mulligan a one swamp hand, but his second hand didn't seem that much better, being forced to keep a one swamp, Cabal Coffers hand with a multitude of expensive spells. He didn't draw a swamp till turn 3, but it did allow him to cast a Nantuko Shade on that turn. Labarre responded with a Pyschatog, with a blue mana open, trying to represent he had a Circular Logic. This was confirmed when Bram attempted to Chainer's Edict him, and he responded with the expected Logic. He proceeded to Concentrate in an attempt to improve his position, but this allowed for more Snepvangers to Edict away the Psychatog and begin attacking with his Nantuko Shade. Labarre triedto come back in the match by casting his another 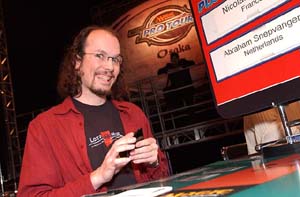 Psychatog and a Shadowmage Infiltrator, but the defensive line of the Dutchman was bolstered by a Shambling Swarm. The Shade kept coming in, for another 6 damage as the Frenchman declined to block, and was soon joined by a twin. Finally the Frenchman decided to block the twin shades with his Infiltrator and Tog, but it became clear that something was afoot when the Frenchman decided to Compulsion perfectly good cards into his graveyard. His strategy became clear when he Upheavaled the next turn as well as casting a Psychatog. But Bram saw through that plan and had the Innocent Blood at the ready. After that plan failed the match deteriorated with multiple Shade's ending the first game. 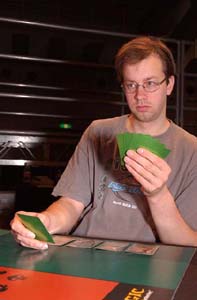 Game 2 sees Labarre a little more active with a second turn Zombie Infestation, with Snepvangers replying with a Mesmeric Fiend, taking a Shadowmage Infiltrator. The fiend was short lived with an Edict burying it before it held Finkel for any longer. Shadowmage Infiltrator hit he board the next turn, but was held off by a Nantuko Shade, but a combination of Aether Bursts made sure that the Invitational card got in for a few hits. Snepvangers attempt to kill the Mage were continually thwarted by the creation of Zombies from the Infestation, as well as the occasional Circular Logic. Finally Snepvangers stabilized the board with a Mindslicer which held off a ton of Infiltrators, and when a Laquatus' Champion hit the table there were not many turs remaining in the match. Snepvangers added insult to injury by casting Hypnox, which elicited a chuckle and concession from the beaten Frenchman.