Round 3: Noah Boeken vs. Jan Doise 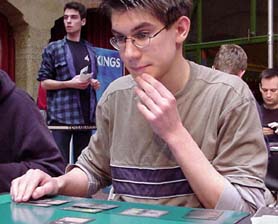 Noah is not just a well known pro-player, he is the only non-Norwegian guy who won the European Championship, back in 2000. Jan Doise is Belgium's current National Champion and has been doing well in several Grand Prix on the continent.

Noah started rocking the place with a pet toy hamster or rat—we were not sure on the creaturetype—chanting "Everybody was kung-fu fighting". It turned out be a hamster, dressed in a kimono, belonging to Olivier Ruel. Smooth jokes were passed on and there was a general feeling of comraderie among these two players who frequently remain in each other's company.

Jan started of with a swamp and a forest, while Noah put his island and forest to work casting Rites of Spring. He discarded a forest and a Roar of the Wurm to search for two more lands. The look on Jan's face was responded to by Noah's words: "Its getting worse and worse..." as he casted Phantom Nantuko.

Jan seemed to be equally lucky. He cast Innocent Blood instantly killing the Nantuko and following it up by a Barbarian Outcast. The next two turns Roar of the Wurm and Dirty Wererat hit play but Noah enchanted the Wererat with a Stupifying Touch while Jan had an empty graveyard.

Jan casted Flameburst on Noah's Mystic Familiar but had taken a few hits from the big Wurm. Next, Centaur Chieftain came roaring in aiding the Wurm in a daring attack leaving Jan with the only option to chumpblock the Wurm with his Outcast. Jan played Krosan Archer that was more than welcome.

The feature matches started to draw a crowd, mostly local players. The tempo of the game now slowed down a little bit, so Noah and Jan took the opportunity to discus a few 'what if's'.

After the Krosan Archer hit the table no more attacks were launched for several turns. Then Noah cast Aven Fisher only to see it get Sweltered alongside his Auramancer. Over several turns Noah played Hydromorph Guardian and Acorn Harvest with flashback. In spite of five ripped paper tokens in play, one of which was a big wurm, Noah did not attack. The next turn however his doubting would prove perfect insight as he was lucky enough to draw a Keep Watch. Noah declared an all out attack with seven creatures and played the Watch, only to see Jan respond to it with a Violent Eruption on his four squirrels. This hugely decreased the number of cards Noah would draw. In an attempt to eliminate the Wurmtoken Jan declared all his blockers on it, taking five damage from unblocked creatures. Noah assigned damage to the Archer, considering it the most annoying blocker but forgot Jan could keep it alive by pumping its toughness. He made up for it by Refreshing the wurm but couldn't stop himself from commenting "Oh boy, am I playing bad or what."

Jan's Gravegouger got to remove Stupifying Touch and Refresh from his opponent's graveyard. Then Noah remarked how he could have saved his Squirrels from the Violent Eruption had he seen his own Hydromorph Guardian in play. Noah cast a Psionic Gift on his Centaur keeping the upperhand, pointing that out by enchanting the Archer with a Stupifying Touch. A new attack with Wurm and Chaplain caused Jan to lose two blockers in the process. Scrivener brought back Keep Watch. Noah noticed: "Your creatures are not efficient blockers," as both of them had a Stupifying Touch on them and Jan had only three cards in his graveyard. Jan agreed and scooped up his cards.

Both players were having fun and made remarks on their play.

Noah: "Bad players can win games too," as he sideboarded in another Refresh and a Benevolent Guardian. Olivier Ruel's kung-fu fighting hamster got everyone on the move, shaking their head and shoulders, which made it almost a shame there wasn't a dancing contest attached to the EC.

Jan requested Noah to start "so he could draw more cards" and "abuse Innocent Blood".
Jan had to take a mulligan to six, which caused Kung-Fu Hamster to spread its vocal cords into the air. Noah showed the cards he held in hand to Olivier Ruel and both laughed . Jan's new hand of cards urged him to mulligan to five. This time Noah decided the hamster should stay silent not to upset his opponent but Jan hid it just in case.

Noah started of with a Benevolent Guardian, later on followed by Hydromorph Guardian and Aven Fisher. Jan played Gragegouger and Swelter on the Hydromorph Guardian and the Fisher. Noah doubted for a while than sacked his Benevolent Guardian, saving the blue Guardian. Both players kept a balance on the playing field, but Arcane Teachings on Jan's Gravegouger gave him a big attacker, only to be Aether Bursted two turns later.

Noah again made an all out attack casting Keep Watch in the process. In response Jan again removed four creatures, this time using both Lava Dart and Engulfing Flames twice with flashback. Jan cast Soul Scourge, which still seemed too little too late as Noah kept playing creatures sending them into an everlasting wave of attacks. Jan kept his cool and attacked with the Scourge taking Noah down to a life total low enough to die to a newly cast Soul Scourge. 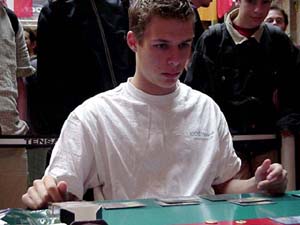 Noah still shook his head in disbelieve seeing how close the second game got him to winning the game and taking the match. Jan put up a smile realising how lucky he was. This time Noah let Jan start the game. He could read on Jan's face he wanted to keep his hand.

Followed some quick interaction between Noah's creatures and Jan's removal. Benevolent Guardian immediately got Lava Darted. Basking Rootwalla challenged Jan to sacrifice his mountain for the flashback-cost of the Dart in order to get rid of the hard-to-kill Rootwalla. Jan decided the sacrifice wasn't worth it, only to be chased by a Phantom Nantuko. This however allowed Jan to cast Engulfing Flames on the Rootwalla.

Jan started to feel haunted as a Phantom Tiger joined the attack. Without any blockers Jan got quickly low on life. Failing to draw decent answers to Noah's threats Jan scooped and Noah showed his 'broken' hand holding Aether Burst, Roar of the Wurm and Refresh alongside two lands. This was a quick race with Noah gaining superdraws, to which Jan failed to have sufficient answers.

Is Noah on his way to repeat his success from two years ago?