Round 3: Noah Boeken vs. Johan Sadeghpour 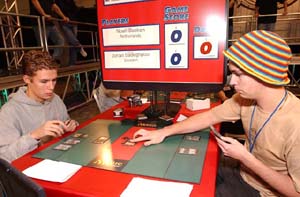 The Swedish player won the dice roll choosing to draw first. Boeken kept a two Island hand but drew a Forest immediately to cast a second turn Wild Mongrel. Johan elected not to block it with his Crypt Creeper. A Syncopate prevented Sadeghpour from summoning a Cephalid Looter.

Noah attacked again with his Wild Mongrel and summoned an Aven Fisher. Both players had two creatures in play as Johan cast a Patchwork Gnomes. Noah's two creatures swung across again. The Mongrel was blocked by the Gnomes and Boeken Refreshed it.

The game was developing into a straight race - Johan attacked bringing Noah to twelve, and cast a Hallowed Healer. Now Boeken chose discretion, only attacking with his Aven Fisher to tie the life totals at twelve. As well as holding back the Mongrel, Noah also summoned a Scrivener to return Syncopate to his hand.

A Patriarch's Desire took care of the Mongrel so Johan attacked again - the Creeper and Gnomes put Noah on eight, but at least he had card advantage with five cards to Johan's two, although he couldn't cast his Gravedigger or Zombie Assassin due to not having swamps.

Johan attacked again and Noah used Vivify to animate an Island. This blocked the Crypt Creeper and his other two creatures blocked Patchwork Gnomes. This didn't really work out so well for Noah, as his land was Afflicted. Johan then used his Hallowed Healer to keep the Crypt Creeper alive, and regenerated his Gnomes.

Boeken attempted to bring back his Wild Mongrel with Gravedigger, but Johan used his Crypt Creeper to remove it from the game. Still Noah couldn't deal with the Hallowed Healer with his bunch of two toughness creatures, and a combination of this and the Patchwork Gnomes brought Noah to four before he could kill the Healer. At the time it was too late, as Johan had just summoned an Aven Flock.

Noah was unable to make any blocks that wouldn't kill his creatures, so he conceded after a couple of turns of chump-blocking. 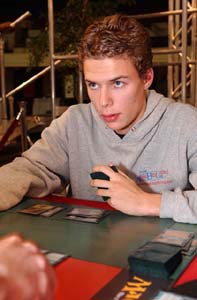 This time it was the Dutchman who chose to go second, and he summoned a second turn Werebear. Johan cast a Cephalid Looter, electing not to block the Werebear. Noah cast Shadowmage Infiltrator, but unfortunately for him Johan had a black creature to block. Even worse his Gravedigger fetched back the creature that he had discarded to Cephalid Looter.

The Infiltrator managed to get through the Digger with the aid of a Twigwalker. Johan summoned a second creature, Childhood Horror, but he was forced to go on the offensive when he reached Threshold a few turns later.

Despite the Looter, Johan wasn't drawing anything helpful, and Noah quickly amassed a force of Shadowmage Infiltrator, Werebear, Otarian Juggernaut, and Scrivener. Johan the attempted to cast a blocker. Boeken sacrificed his Bog Wreckage to get the blue mana to Syncopate it - giving Werebear and Juggernaut Threshold. With only a Cephalid Looter and a Hallowed Healer as potential blockers, Johan died rather quickly after that.

Johan forced Noah to go first, it seemed neither player wanted to go first. Johan had to take a mulligan in any case. Boeken used a Werebear to accelerate into a third turn Krosan Archer. His hand was stripped down to two Forests when Sadeghpour played a Last Rites, although Noah immediately drew Aven Fisher.

The Swede played a Gravedigger - fetching back the Gravedigger that had been discarded to Last Rites, and Noah kept drawing lands. A board situation developed where Johan had Gravedigger, Crypt Creeper, and Mystic Zealot in play compared with Noah's Fisher, Krosan Archer, and Werebear. Despite the fact that Noah had only lands in hand he was still hitting with the Fisher every turn. 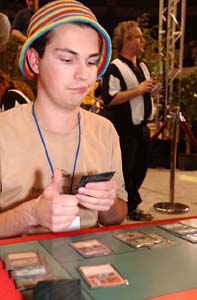 Finally Johan drew a Fledgling Imp although it wasn't exactly the ideal thing to block an Aven Fisher with. Noah would gain two cards advantage by attacking with the Fisher if it was blocked, but he elected to hold back.

Every single card that Noah drew for six turns was a land, and still he wasn't being attacked as his single Krosan Archer was still holding the fort, although Sadeghpour's force of Patchwork Gnomes, two Mystic Zealots, Childhood Horror, Gravedigger, two Crypt Creepers and a Fledgling Imp was looking pretty scary.

Eventually Johan decided to go on the aggressive, sacrificing his Crypt Creepers and discarding his hand to give Threshold to the Zealots and the Childhood Horror. These three flyers attacked: Noah blocked the Childhood Horror with his Krosan Archer, kept it alive, and took six.

This dropped Noah to twelve with Johan on ten. Noah's hand was Refresh, and Vivify, so he spent a while trying to figure out how much damage he could get through. After at least a ten minute think, he attacked with Aven Fisher, the Swamp he had Vivified, and the Werebear.

Johan blocked Werebear with his Gnomes and Gravedigger, and the land with his Fledgling Imp. Noah's Refresh now saved all of his creatures and killed the Gravedigger and Imp. Sadeghpour went down to eight and drew his card - an Aven Archer which he summoned immediately. The Childhood Horror attacked again of course, and Noah discarded a card to his Krosan Archer.

Noah again thought for a long time, but he merely cast Scrivener to bring back Vivify. Once again the Childhood Horror attacked. It was double-blocked by the Aven Fisher and Krosan Archer, Johan chose to kill the Aven Fisher.

Noah had drawn an AEther Burst; he was just waiting for the right moment to cast it. He summoned a Zombie Assassin and Syncopated Johan's Dirty Wererat. With Johan only on twelve it seemed certain that Noah would attack this time.

Indeed he Vivified his Swamp, used the Assassin on one Zealot, AEther Bursted the other and attacked. Johan managed to survive one attack step, but he was on three and down to one Patchwork Gnome, and he conceded as he couldn't survive the next one.