t was Brew versus Brew in Round 3. Perpetually jolly Gabe Walls was playing a mostly blue green-blue deck concocted with Gab Nassif, stocked with permission, an Oracle eight-pack (Sea Gate Oracle AND Mul Daya Oracle) and backed up with six creature-stealing enchantments. Travis Woo (best known for his breakout Living End deck at GP–Oakland), was piloting an unorthodox red-green mana-denial deck. Woo's deck aims to punish the mana-hungry big players of the format through Roiling Terrain, Goblin Ruinblaster and Lodestone Golem, accelerated out by Lotus Cobra, Nest Invader, and Overgrown Battlement. On the play it is capable of some cruel starts.

Walls won the die roll and led with Khalni Garden. He had Spreading Seas for Woo's Raging Ravine. Woo made a Lotus Cobra, and after Walls played Halimar Depths, dropped Roiling Terrain on the Garden. Walls replaced it with an Island and passed. Woo made a second Cobra, and with the extra mana tried a Lodestone Golem, but Walls had the Cancel. 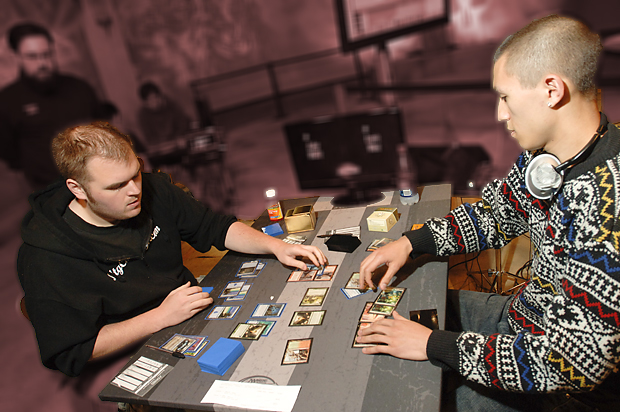 Sea Gate Oracle netted Walls a card, and he played an Island. Woo tapped six and swung in with Hellkite Charger, dropping Walls to ten. All Walls could do was play a Halimar Depths and send the Charger back with Jace, the Mind Sculptor. Woo brought it back for an encore and swung in, killing Jace. This time, however, Walls had access to five mana, and was able to Vapor Snare the Charger to his side. Woo had a second waiting in the wings, and suddenly Walls was down to five.

Walls picked up his island for Vapor Snare and Domesticated one of Woo's Cobras. Woo still had a ton of gas in hand. He counted his mana, then played Scalding Tarn and Vengevine. With his leftover mana he was able to activate Raging Ravine and swing with the whole team. Walls pushed the stolen Hellkite in front of its brother, the Plant token blocked the Ravine, and the Oracle and Cobra teamed up on Vengevine.

Walls was left alive with an empty board. He untapped, drew, and then played another Jace, the Mind Sculptor and Brainstormed: Nothing that could stop the now-lethal Ravine.

Two fetches got Woo a mountain and forest, enabling a Lotus Cobra. Walls played his third land and passed with three blue open. Woo tried Lodestone Golem, but was Cancelled. Walls untapped and brought the Cobra over to his side with Domestication.

Woo kicked up a Goblin Ruinblaster on Halimar Depths and dropped Walls to 16. Now hidden behind the Cobra, Walls cast Jace, the Mind Sculptor and Brainstormed. Woo traded the Ruinblaster for the traitorous Cobra, then knocked two loyalty off Jace with Roiling Terrain and played a Raging Ravine.

Walls Brainstormed and brought out more speedbumps: Sea Gate Oracle and a plant from Khalni Garden. Woo animated his Raging Ravine, ate the Plant, and played a second Ravine, but without more pressure he was giving Walls a lot of time. Jace peeked at the top of Woo's library and let him keep the card. Walls played a Tectonic Edge, further tightening his grip. 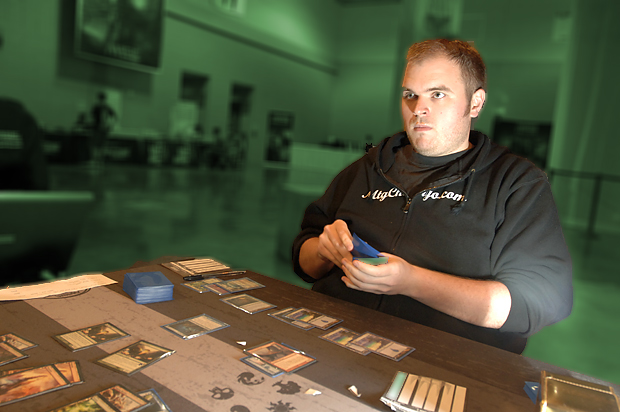 Woo tried to break through with Hellkite Charger, but this time Walls had Deprive ready, picking up his Garden for an added bonus. Jace, the Mind Sculptor continued to fateseal Woo, keeping him off dangerous cards. He animated his Ravine and Walls destroyed it with the Edge. Walls did, however, let him enjoy a Nest Invader. So that was something.

Walls had to put his next fateseal on the bottom of Woo's library, giving him a live draw, but had the Cancel in hand for what turned out to be a second Hellkite Charger. Wall restocked with Brainstorm from Jace and an Oracle of Mul Daya, getting a second Tectonic Edge from the top of his library. Woo struggled to find any action. His Ruinblaster forced Walls to use his Edge, and then the following turn used Burst Lightning to put Jace down to three loyalty, but the game was firmly under Walls's control. Soon Avenger of Zendikar made an appearance, and it was on to Game 3.

"Yours too," grinned Walls.

As Woo played his second land Walls started chanting "Nothing nothing nothing nothing nothing ..." and when Woo paused, "No Cobra, no Cobra, Nest Invader." Woo broke his heart by showing him a Cobra. Walls played a second island. Woo cracked a fetchland and spent two on Everflowing Chalice, then tapped out for Roiling Terrain, but Walls had Spell Pierce.

Walls played a Misty Rainforest and passed the turn. Woo hit for two and played Nest Invader. Walls gummed up the ground with Sea Gate Oracle and Khalni Garden. That was fine by Woo, who went overhead with Hellkite Charger, dropping Walls to ten.

Walls frowed at his options. He played Jace and bounced the Charger, playing an untapped Island. Woo gamely replayed it and offed the planeswalker. Walls had a replacement in hand, and made the same play, this time ending with two untapped Islands. That made Woo pause, and reconsider his plan. 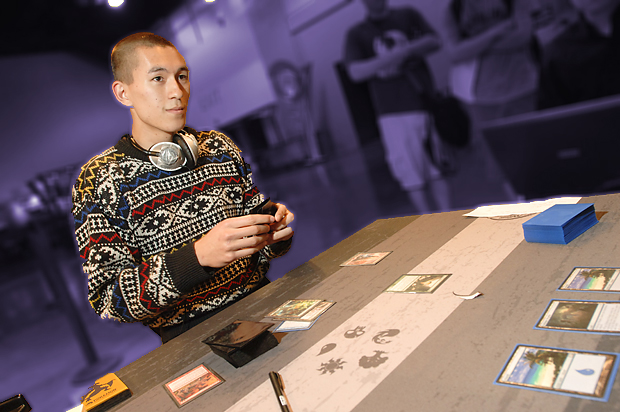 He came out of the tank and kicked up Goblin Ruinblaster, then animated his Raging Ravine and sent everyone charging at Jace. Walls picked off the Lotus Cobra with his Sea Gate Oracle and put Jace in the grumper. He untapped and played Oracle of Mul Daya. The Everflowing Chalice on top of his deck didn't interest him, so he shuffled it away with Misty Rainforest. He was rewarded with Tectonic Edge, and then Halimar Depths.

Woo looked at the board and decided it was time to try his Charger again. To his surprise, Walls had been bluffing the Deprive, and since he knew the top of his deck, he scooped up his cards, dead to the incoming Charger in two attacks.

Afterwards Travis Woo explained that he's always had a soft spot for land destruction, and can't help but try it in any format. Luckily, this time, his testing showed it to be good. Lodestone Golem in particular is brutal to so many decks, and even dodges All Is Dust.

4 Spell Pierce 4 Cancel 1 Into the Roil

2 Avenger of Zendikar 2 All Is Dust