Round 3: Olivier Ruel vs. Gabriel Nassif 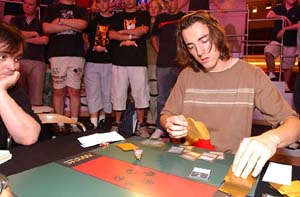 Earlier today, Randy Buehler noted that the new Standard appears more defined by the cards that are not included in Eighth rather than the cards that were added. Both of the French players sitting down for this feature match were stubbornly trying to replace missing cards from pre-Core Set standard.

Gabriel Nassif has had tow strong finishes this year. He made the Top 8 at PT Venice and finished second to Bob Maher, Jr. in the final installment of the Masters Series. He also finished highly at the European Championships with a black-white deck featuring Decrees of Justice and Pain. He was running Zombies today though and was attempting to replace the absent Duresses with Blackmail.

His opponent was his countrymen—and penguin lover--Olivier Ruel. Olivier has had success in the past, most notably in the team format with his brother Antoine. He will have an opportunity to showcase those talents this weekend during the team competition as a member of the French National team. Today is running Wake. With Counterspell and Memory Lapse passed into the realm of Extended, Olivier is looking to replace them with Syncopate and Mana Leak.

Gabriel thought long and hard about whether or not to keep his opening hand with Cabal Therapy, Blackmail, Nantuko Shade, Smother, a couple of zombies and a lone Swamp. He was on the draw and eventually decided to go for it. He did not draw a second land until the sixth turn. Olivier who had opened with Krosan Verge had eight mana by that point and a pair of 4/4 angels. Gabriel was able to Smother one of them but the second one finished him off in short order.

Gabriel had a better draw this game and opened with a Nantuko Shade. His third turn Cabal Therapy hit a Wrath of God and revealed Syncopate, Renewed Faith, and five lands. Olivier played one on his third turn and passed back the turn.

Gabriel had to think for a while on this turn. He could play a Braids but was concerned about falling behind in the permanents race thanks to Olivier's Krosan Verge. In the end he decided to attack for four with the Shade and play a Withered Wretch. Olivier sacrificed the Verge EOT and played another on his next turn.

Gabriel kept attacking and then sac'd his Withered Wretch to nab the Syncopate with a flashed back Therapy—he also saw Moment's Peace and Renewed Faith as well as a wealth of lands. With Olivier's deck requiring copious amounts of mana and three different colors of it, Gabriel wanted to keep his opponent in check and played the Braids. Graveborn Muse came down on Gabriel's next turn and his opponent dug for answers with Deep Analysis but had to tap out to do it. 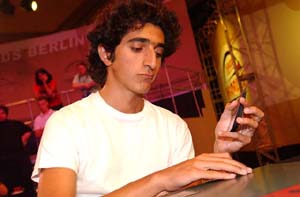 Gabriel was curious if he had found any and looked at his hand with Cabal Therapy naming Wrath. He found a pair of white Decrees flashed it back to leave him with nothing but lands. Olivier windmilled his top card onto the table hoping to find Wrath but it was Renewed Faith. He bought a couple of extras turns but eventually fell with no Wrath near the top.

As they prepared for this game, PT Los Angeles winner and one of Olivier's teammates on the National team, Farid Meraghni, came by frowning. He had just received a match loss from the judges. Olivier shook his head sadly. Apparently, the third player on their team is playing a rogue deck over the protestations of his countrymen and they expect him to go 0-6. Each additional loss for the team is hard to swallow—especially for a rules infraction.

Now it was Olivier's turn to decide if he would keep a sketchy hand. He was holding two Krosan Verge but no other lands. While he muttered in French, Gabriel grew bored and began to watch the adjacent match. Eventually, he decided to keep and the rubber game was underway.

Gabriel had the first play with Nantuko Shade and would devastate Olivier if he failed to draw land number three. He was holding a Rancid Earth and a Braids but when Olivier ran the windmill plan this time it yielded a Plains. Gabriel used the LD spell on the plains and Olivier stayed even by sac'ing a Verge.

Braids came down next and Olivier sac'd his other Verge EOT. He played a morph and a fourth land—meaning he would be able to unmorph what was likely an Exalted Angel in response to Braids on the stack next turn. Gabriel offered an out for the Braids problem when he attacked with it and the Shade on the next turn but Olivier wanted to get his girl online. Nassif amped up the pressure with a Graveborn Muse.

As expected, Olivier unmorphed the Angel and sent her into the red zone to get a little life back—the scores leveled at 16-15 but Gabriel was keeping it coming and took him down to five on the next attack. Another attack got it back to 11-9 but when he fell to one a Gempalm Polluter took him out and handed the French National Team another loss for their ledger.