Round 3: Omar Sagol vs. Florent Jeudon

Spain's Omar Sagol is well known in his country for his good results in local events including a Top 9 at GP Madrid. Florent Jeudon is also doing quite well in GPs, since he finished second in Antwerp and more recently eight in Copenhagen, both limited events.

Omar wins the toss and chooses to play first. Despite his mulligan he offers Jeudon a strong start with turn two Sparkmith turn three Morph Creature. Indeed morph is really dangerous in red/green as green monsters ar big and red are tricky. Florent had a good start too with his three colors on turn three, plus a Wirewood Elf and a morph creature. 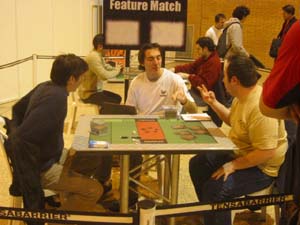 Getting ready for the first Feature Match of the day.He chooses not to block Omar's morph first attack and to keep all his mana opened for the next one, but Omar prefers to avoid the fight. He plays Symbiotic Elf and passes his turn, at the end of which Florent reveals his mysterious creature, a Skirk Marauder that kills Sparksmith. A Crown of suspicion and two turns later, a Timberwatch Elf joined each side and Omar is up 17-14. As he always does, Florent chooses defence better than attack, and as he always does, he plays slooooooowly. He adds a clone (a third Timberwatch Elf) but he goes down to six before he can use it. At this time, he also plays Wellwisher and Misform Dreamer but they die at the end of his turn as Omar plays Starstorm for one.

On his following turn Sagol deides to go with both the morph creature and Symbiotic Elf and with no surprise both find a 1/2 on their way. As he chooses to pump the morph Florent reacts by double boosting the elf blocking it and kills the Skinthinner as Omar only had one black mana.

Both players are playing way too slow and playing three games of this lengthwould just be impossible, two would even be hard. But at this point any mistake could be lethal so both players concentrate a lot.

The life totals (Omar 17-6) didn't change but the table did as both Sagol and Jeudon developed quickly.

Frenetic Raptor, Canopy Crawler 3/3 (thanks to showing the 6/6) and Spined Basher joined the Spanish troops.

At this point, Frenetic Raptor just reached the table and Omar enjoys the fact the annoying double strike creature can't block to attack with the Basher who kills Sledder. Florent needs to counter attack very fast, for he doesn't loose the game of course but also because there are only 15 minutes left on the round. He attacks with ridgetop Raptor, kills Symbiotic Elf, play a morph creature and enchant his 3/1 illusion with Lavamancer's Skill. 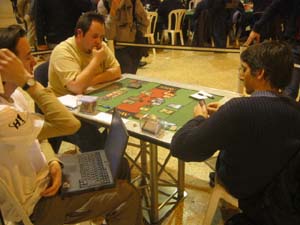 Omar Sagol studying the table while Jeudon lounges.The problem with slow players often come from attack phases. One minute to decide who attacks, two to choose the blocks, three more to think about how to pump...

In one word, "optimizing" is more important that anything, even more than time. After the fifteenth twelve minute attack phase Jeudon decides to concede, only 8 minutes before the end of the round.

Florent Jeudon starts the beating with a turn one Sledder but Sagol's Sparksmith is way more annoying. Both players play morph after morph and the game seems like it will go far over the few seconds left they have.

Surprisingly, with his goblin and a couple of removals Sagol manages to clean the table. Time is called, Florent draws a fifty-ninth land and decide to concede, proving he learnt in this match that sometimes conceding and not losing time is also an option.