Round 3: One of These Days, Sadin… 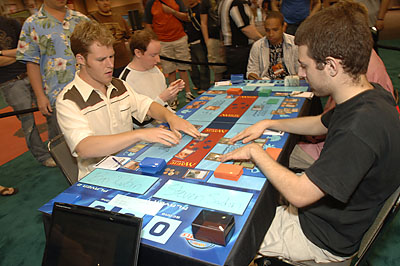 Ben Rubin and Steve Sadin in the heat of battle.

efore the match had started, Steve revealed that he and his opponent Ben Rubin had been sitting next to each other during the first round and each knew which deck the other was playing. Steve was running his second choice deck for the weekend after a freak accident kept him from playing the red-green list he had planned on. After lending it to a friend for the Grinders, they had miscommunicated about its return. Each had gotten into their car to leave for the night content the other was in possession of the deck. What neither realized was that one of them had set the deck on the roof of the car prior to leaving, assuming the other would retrieve it. Instead, both left it there, and it is now on the highway somewhere, blowing in the wind.

Sadin was the Grand Prix-Columbus champion earlier this year, while Ben Rubin has a slightly more storied resume. A two-time Masters Champion and former member of the U.S. Nationals team, his lifetime earnings playing professional Magic are $155,525.

Before rolling a die to determine who would play first, Rubin said "You know, if I lose the roll I'm going to want to switch sides of the table with you." Sadin laughed, but after rolling a 20, he was shocked to find Ben getting up from the table.

Sadin: "Wait, are you serious?"

After settling in, the two players got under way. By the end of two turns, Sadin had a Treetop Village and Yavimaya Coast with a Riftwing Cloudskate counting down from three suspend counters. Rubin, meanwhile, had made a suspended Greater Gargadon and Dark Confidant from a Mountain and Sulfurous Springs.

Rubin bashed with his Confidant, but Steve calmly blocked with a Wall of Roots he had played on his third turn. Post-combat Ben played a Mogg War Marshal and Scorched Rusalka, then passed to his opponent. Steve had a second Wall of Roots, and at the end of Sadin's turn, Rubin sacced his War Marshal to the Gargadon to avoid paying an upkeep cost.

Dark Confidant revealed a Threaten for Rubin, and he went in the tank for a moment. Eventually he decided to get into the red zone and a Confidant, Rusalka, and two Goblins bashed in for a total of 5 damage with some help from a Pendelhaven.

The turns progressed until the life totals stood 16-10 in favor of Sadin. Rubin attempted a Threaten on Sadin's previously suspended Riftwing Cloudskate, which had bounced Rubin's Dark Confidant upon entering play, but Sadin had Momentary Blink to counter. Upon coming back into play, the Riftwing targeted a Goblin token and it looked like Rubin was slowrolling his Gargadon, opting not to sac the 1/1. After a few moments of thinking, however, he realized his error and attempted to indicate his intent to remove a counter from Gargadon. Sadin pointed out the token had already been long removed, and Rubin was forced to shrug and pass the turn, quickly feeling the game slip away. 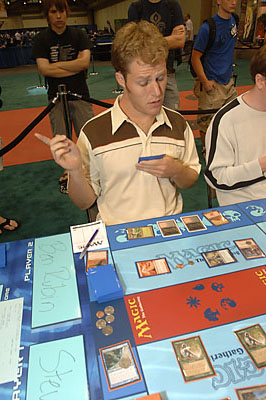 Sadin's position, in contrast, was becoming overwhelming. He attacked with two Treetop Villages and the Riftwing Cloudskate, leaving a third Village behind, and dropped Ben to 5, though he did have to lose one of his Villages to blockers. Ben drew his card for the turn and began considering his options before trying a second Threaten on the Cloudskate. It was Steve's turn to shrug, and he passed the 2/2 over to his opponent. Ben's attack left Steve at 14 and the Cloudskate was sacrificed to Greater Gargadon leaving the 9/7 with just two counters. That was low enough for Ben, who sacrificed two lands to bring his fattie onto the actual board, but Sadin had Remand. Ben re-played his Dark Confidant, re-suspended his Gargadon, then shipped the turn.

Steve didn't hesitate to activate both Treetops and attack, getting in for 4 damage after Ben double-blocked one with a Goblin token and Dark Confidant. Steve passed the turn, but after looking at his top card Rubin quickly packed it in.

Both players wished each other luck before beginning Game 2, but things didn't look lucky for Rubin as he had to return his opening seven for a new hand of six. His second hand earned a grimace, but he begrudgingly kept, while Sadin was perfectly content with his opener.

After the initial turns, Steve again had a Cloudskate suspended from his Flagstones of Trokair and Hallowed Fountain. Rubin had a Sulfurous Springs, Mountain, and an Epochrasite. The 1/1 has been a bit of a hit during the Time Spiral Block PTQ season, but seems an interesting choice for Standard.

Sadin added a Wall of Roots to his board, but that didn't stop Rubin from getting in with his Epochrasite, threatening a "trick." Steve didn't bite and moved his 0/5 to intercede.

Rubin: "That trick is gonna work one of these days…"

A second attack from the Epochrasite was again stymied by the Wall, but Rubin added something to the board which could potentially be backbreaking for Sadin's nonbasic-heavy deck: Magus of the Moon. It was going to take at least one more turn to find out, however, as Steve's Riftwing Cloudskate finally hit play, returning the 2/2 to Ben's hand. Steve bashed with his 2/2 flyer and a Treetop Village, then played Aven Riftwatcher.

By the beginning of Steve's next turn, the life totals stood 19-11 in favor of Sadin, who had a Wall of Roots with two counters, Riftwing Cloudskate, and an Aven Riftwatcher with two time counters. His seven lands included only a single Plains, meaning, thanks to the Magus which had re-entered play, he couldn't play most of the cards in his hand. Rubin, meanwhile, had only four lands, though his Magus of the Moon, Epochrasite, Mogg War Marshal, Goblin token, and Bob looked to make things rough on Steve. 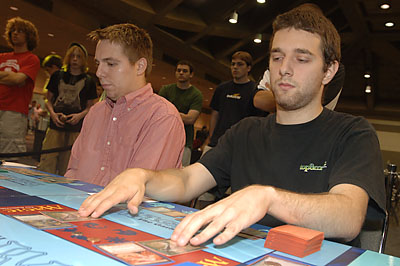 A Momentary Blink on Cloudskate sent the Magus back to Ben's hand, and Steve went deep into thought after combat, considering which spells he needed to play before the Magus came back down. He settled on cycling Edge of Autumn, sacrificing a second Flagstones of Trokair which also allowed him to search out an additional basic land. He then flashed back his Blink on Aven Riftwatcher, re-setting its counters and gaining 4 life on the way before playing Tarmogoyf.

Rubin re-played his Magus, but it looked like the air force of Riftwing Cloudskate and Aven Riftwatcher might be enough to put Ben away. The totals stood 23-7 in Steve's favor, and on his turn he opted to attack with both flyers and his Tarmogoyf. The 'Goyf traded for two Goblin tokens, the Confidant, and the Epochrasite (which went to suspend-land), but his flyers dropped Ben to 3.

Rubin drew his card for the turn, verified the life totals, and extended his hand.

Steve Sadin defeats Ben Rubin 2-0 despite not playing the deck he wanted to...