Round 3 - Pablo Huerta vs. Damian Brown 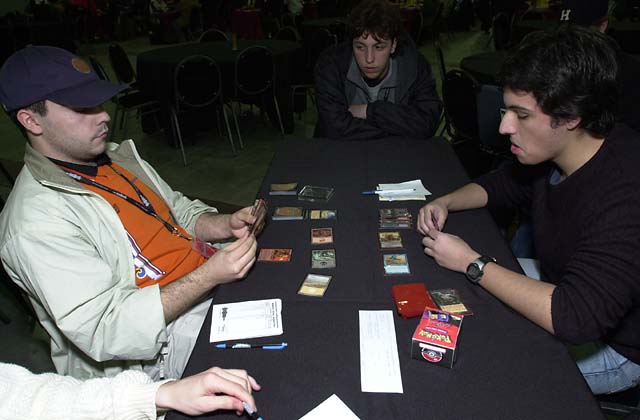 Damian played first this game. Pablo opened with a Tidal Visionary, while Damian summoned Shivan Zombie. Pablo then played Sinister Strength on the Tidal Visionary and attacked. Damian chose not to block, and took four damage. The Zombie attacked back for two, and Tribal Flames took out the Visionary. The next turn saw Pablo summon a Phyrexian Rager to match the Zombie. It blocked the attacking Zombie on Damian's next turn to trade with it, and Damian followed up with Tundra Kavu. Pablo answered back with Mire Kavu.

The Mire Kavu attacked, and was blocked by the Tundra Kavu. Damian decided not to turn Pablo's Swamp into an Island or Plains before damage, which would have allowed both creatures to trade. However, he did play Zap to kill the Mire Kavu. Pablo rebuilt his army with Urborg Phantom and Dream Thrush. Damian untapped and played Gerrard's Verdict, forcing Pablo to lose both cards in his hand- Mountain and Vodalian Zombie. Pablo topdecked Bog Down, forcing Damian to lose his two card hand of Plague Spores and Goham Djinn.

Vindicate was now played on the Phantom, and the Zombie continued to attack. It was soon joined by a Goblin Legionnaire, while Pablo only had out a Dream Thrush. Lava Zombie increased the size of Damian's army, and the gated Shivan Zombie came right back into play without missing a beat. This was more than enough to give Damian the first game. 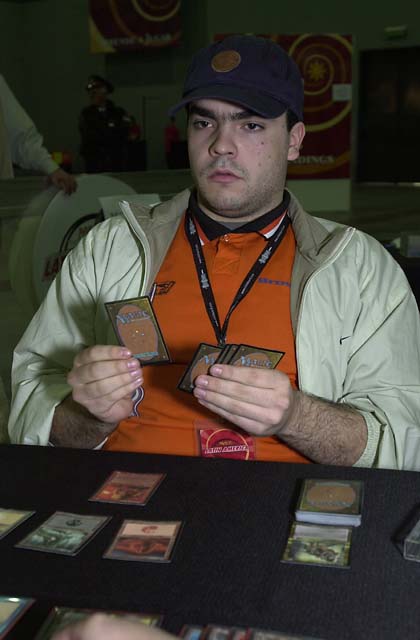 Pablo played first this time, and started off with a second turn Dream Thrush. Pouncing Kavu was summoned without kicker by Damian. Pablo then played a Vicious Kavu. Damian answered with Gerrard's Verdict, forcing Pablo to discard Swamp and Dead Ringers. The Vicious Kavu now attacked for four damage, and Pablo ended his turn. Damian played Bog Down, forcing Pablo to lose his two card hand of Nightscape Battlemage and Probe. Still, the Vicious Kavu continued to come through for four damage, and looked even more threatening when Pablo played the Power Armor he had just drawn. At this point, it was obvious that Damian was mana screwed at three lands.

Damian drew, and Pablo activated his Dream Thrush to "Port down" one of Damian's lands. However, Damian felt that Pablo reacted too slowly, and had only remembered the Thrush play once Damian was ready to cast spells. Colin Jackson was called over, and decided that Pablo would be allowed to activate the Dream Thrush on Damian's draw step.

The Vicious Kavu now attacked, and dealt even more damage thanks to the Power Armor. Damian played Zap on the Dream Thrush, but was still stuck at three lands. A Living Airship was summoned by Pablo on the next turn. Damian finally found a fourth land, and played Tundra Kavu. Both of Pablo's creatures attacked, and the Tundra Kavu blocked Vicious Kavu. Pablo used the Armor to make the Vicious Kavu bigger, which would allow it to survive combat. However, Damian was ready with Pollen Remedy, which kept his Kavu alive as well.

Damian went to work on trying to stablize by playing Shivan Zombie, but the Power Armor was obviously going to make things very difficult. The following attack resulted in Damian losing both his creatures, while Pablo was left with a Vicious Kavu and Living Airship. This gave Damian a window of opportunity, He played Magma Burst with kicker, taking out Pablo's remaining creatures. Still, this left him with only two lands. Pablo recovered with a Razorfin Hunter, while Damian summoned Tundra Kavu.

Damian made one of his lands into a plains, allowing him to summon Crusading Knight. Pablo now played Bog Down, forcing Damian to lose his two card hand of Lava Zombie and Plague Spores. The 5/5 Knight attacked and got through for damage, while Pablo's Hunter shot for one on end step. Both of Damian's creatures attacked and got through for damage on the next turn. He tried to eliminate Pablo's Hunter with Tribal Flames in an act of hope, but Pablo didn't forget about Power Armor. This was enough to convince Damian to concede, as he was facing lethal damage on Pablo's next turn. 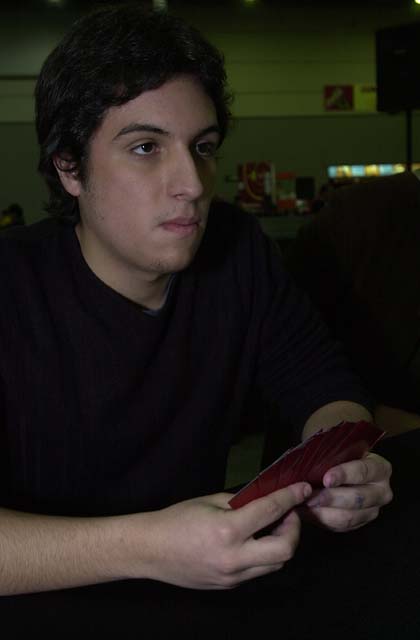 Damian played first, and Pablo opened up with Tidal Visionary. The next turn saw Damian summon Goblin Legionnaire. It attacked on the following turn, and was joined by Tundra Kavu. Pablo started to build up his defense with Kavu Recluse. Damain still had combat advantage due to the versatile Legionnaire, and charged head-first with his creatures into the Red Zone. The Recluse and Tundra Kavu traded. Pablo now played Power Armor, and Damian summoned Flowstone Charger. Damian then played Bog Down with kicker, leaving Pablo with one card in hand. Pablo discarded Black spells that he could not play due to not drawing a swamp. The following turn saw Damian kill Pablo's Visionary with Vindicate. Pablo could not draw a creature, and the game was over.