Round 3: Peter Szigeti vs. Eric Taylor 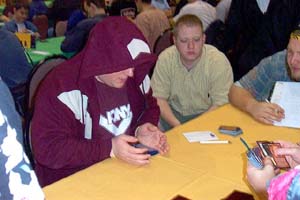 ptrPeter Szigeti "PTR" and Eric Taylor "EDT" are much more known by their initials than by their full names, making it very easy for a reporter, like myself, to refer to them with just three keystrokes. This "Initials Match" pitted PTR's very solid black/blue deck against EDT's black/blue/green.

Game 1 started on the third turn with EDT playing a Puppeteer, which would be immediately on call to deal with PTR's Shadowmage Infiltrator. However, EDT's "tough mana" as PTR referred to it, would catch up with him, as EDT missed land drops on both turns four and five. PTR put some more pressure on with a Dreamwinder and Shambling Swarm.

EDT finally drew land, but it was after PTR brought forth a Skywing Aven and then, several turns later, cast another one. Crippling Fatigue was used in the interim to dispose of the Puppeteer and EDT succumbed quickly to the fliers.

Game 2 started with EDT casts a Rites of Spring and a Krosan Restorer, helping out his "tough mana," while PTR simply played a pair of Islands and a Swamp. EDT surprised the crowd a bit, searching out a Mountain with his Rites, apparently sideboarding out his blue. 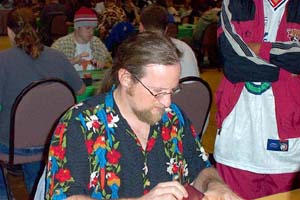 edt The game was tight, with PTR rolling for a while, until EDT got his Swampwalking Krosan Constrictor. EDT's Patriarch's Desire disposed of the Soul Scourge that had been slowly taking down his life, but with PTR at three, after early damage taking its toll, EDT failed to attack with the Constrictor. "Free turn! Free turn!" PTR shouted, and took full advantage. After being attacked to one the following turn, PTR got to see an extra card and ripped Morbid Hunger.

EDT continued to mount an offense, laying such hits as Krosan Restorer #2 and Filthy Cur, while PTR appeared to have run out of gas. Carrion Wurm began to take away PTR's graveyard, and later, his blockers, and finally, his life.

In Game 3 PTR kept a hand with only a Sandfloor Debris for land, and drawing, decided to keep. To make a short game shorter, he failed to make a second land drop for two turns, and just couldn't come back from EDT's second-turn Wild Mongrel. "Just so you know this game was %&$#@!*!," PTR directed at EDT, and scooped up his cards.