Round 3: Phil Freneau vs. Ben Rubin

Both these players are riding high at 2-0. Phil Freneau was crowned Grand Prix – Los Angeles Champion at the beginning of the year, and is looking for a big follow up. Everyone knows that Ben Rubin is great, but he now that the Masters is gone, it's unclear where he'll be putting up his top finishes. Hopefully since Nationals isn't a Pro Tour, he'll be able to pour on the pressure. 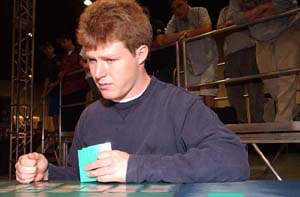 Rubin mulled his first hand, and seemed unimpressed with his second. He laid a Krosan Verge and passed it back. Freneau Duressed him, and stole Circular Logic, leaving him with only lands in hand. Freneau got in with Withered Wretch, but had nothing to speed up the beats. Rubin popped his Verge and continued to play lands.

Freneau didn't manage any other pressure until four turns later, a Nantuko Shade. Rubin had meanwhile drawn into the Wrath of God to clear the table. Freneau regrew his Wretch at end of turn and put it back into play. The net turn he tried a Corrupt, but Rubin had Counterspell in hand.

Soon Rubin was at five. He made two bears with Grizzly Fate. Freneau tried to Smother both of them, but the second Smother was countered. He had the third Smother, and Rubin fell to three. He also had Graveborn Muse. Rubin bought a turn with Moment's Peace. Freneau did not forget to remove it, and they were on to Game 2.

Rubin had the Verge to start the second game, and followed up with a pair of islands. Freneau's Hollow Specter on turn three had him making a disgusted face. 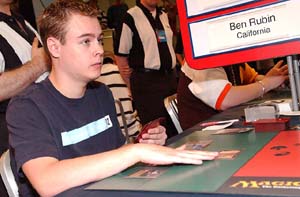 He Verged, then untapped and dropped the Wake, five cards still in his hand. Freneau played a Grotto, and peeked at four cards with his Specter. They were Memory Lapse and three lands. He took the Lapse. Rubin untapped and played a pair of Merfolk Looters, removing all mystery. Freneau stole a forest and played Graveborn Muse.

Rubin took a big turn. Deep Analysis and his two Looters gave him options. He then Wrathed the board and played another Looter. Freneau came back with another Muse. Rubin dropped Kirtar's Wrath while at threshold, then flashed back his Analysis. Freneau tried to get a Muse on the board, but Rubin had Memory Lapse and then Counterspell, all the while beating down with his spirit tokens.