Round 3: Phoenix Foundation vs. The Jokas 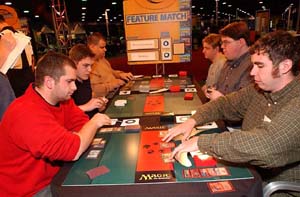 The Phoenix Foundation is probably the odds-on favorite to win this event. After all they are the reigning Pro Tour: New York and Master series winners in this format. Plus, their B player is the only player to ever win a Pro Tour, a Grand Prix, a Masters series, World Championships, and an Invitational! Add to that THREE Player of the Year titles and countless Top 8 performances and you can only come up with one sum...Kai Budde.

Kyle Rose has had his share of success. The Jokas won Grand Prix: New Jersey earlier this year to qualify for this event and individually he has been the US National Champion and won PT: London. He also has more than his share of Top 8s. His teammates Eric James and Norman Woods may not have as impressive resumes as Kai's wingmen but apparently they play together constantly and if they had to get past a pretty tough team in Illuminati to win GP: NJ.

Kai's teammates include Dirk Baberowski, who is one of a small handful of players who can rightfully claim to have won multiple Pro Tour events. In addition to being the reigning champion he also won Pro Tour: Chicago 98. Marco Blume is a former German National Champion and one of the most physically imposing presences on the Tour.

Kyle came out of the gates first with a turn two Patrol Hound followed by a turn three Aquamoeba. Kai did nothing for the first three turns and his first spell was a turn four Earsplitting Rats. Kai pitched a swamp and Kyle ditched a Second Thoughts. The Rats were Repelled EOT and Kyle attacked Kai down to 12 and played an Aven Windreader. The Windreader was taken out by a Butcher in the bottom half of the turn.

Kyle kept the pressure on with a Lost in Thought on the Butcher and swung for five damage taking Kai to seven. Kai played a Thought Eater and said, "Go".

Suddenly the tide was turned and Kai was the one on the offensive swing for two each turn with his Thought Eater and one Ghastly Demise later Kai was up a game.

In the other matches:

Eric was beating down with a G/R army while Dirk (U/W) floundered on three land—he would not be able to climb out of the early hole and he went down a game.

Things were also looking bad for Marco Blume. His opponent had been beating him down for three each turn with an unblockable Wormfang Crab. He was string down fatal damage in the first game desperately looking for an out when he was given a warning for slow play. He seemed genuinely shocked by the ruling as did everyone else on both sides of the table. They appealed to Head Judge Nat Fairbanks who upheld the warning but without any other penalty. They resumed play and the Crab finished him off on the next turn.

Kyle was leading off this game and both players kept their initial seven—although Kai's only contained one land. Neither player played anything but Islands for the first three turns. On the fourth turn, Kyle tried an Aven Fisher but Kai Syncopated it. Kai missed his fourth land drop in the bottom half of the turn and passed it back to Kyle. 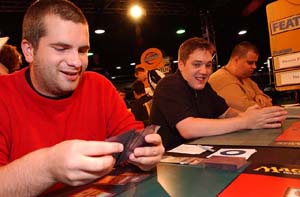 Kyle kept playing lands and made an Aven Windreader. Kai finally found a Swamp but cast two blue spells: Lost in Thought on the Windreader and a Thought Eater. A Cloudchaser Eagle removed the annoying enchantment and the Windreader drew first blood. Kai stalled on four land this time and made a Dusk Imp. He knew a land was coming next turn though, when Kyle's Windreader revealed and Island on top during EOT.

Kyle cast Concentrate and drew three cards. He sent his fliers into the red zone and the Cloudchaser traded with the Thought Eater. Kai dropped to 14 and Kyle played a Nomad Decoy. Kai swang back with the Dusk Imp and Ghastly Demised the Windreader. He then played Zombie Assassin.

Kyle played a Mystic Crusader and passed the turn. Kai used Mental Note on his own turn, Assassinated the Windreader, and attacked with the Dusk Imp. He then played Face of Fear to raised eyebrows all around.

Mystic Crusader took Kai down to 12 and Kyle looked for spiritual guidance in the form of Pilgrim of Virtue and Hallowed Healer. Kai evened up the life totals at 12. He played a Fledgling Imp and then cast Breakthrough for three cards. He pulled three lands and an Aquamoeba that he could not cast that turn.

Kyle sent the Crusader in while the Healer watched its back. Kai's life continued to drain away. Kai attacked with two fliers but Kyle Chastised the Dusk Imp and gained two life. Kai could only Stitch Together a Thought Eater.

Kai was playing off the top of his deck at this point with zero cards in hand. Kyle pitched some cards to a Patrol Hound and attacked with his thresholded Crusader. Kyle added a broker to his board and Kai had nothing during the bottom half of the turn.

Kyle used his Broker putting as plains and a Prismatic Strands in the bin. He dug into a Kirtar's Desire and cast it on the Thought Eater and took Kai down to three. Kai drew a Repel and passed the turn.

Kyle attacked for the win but Kai prolonged the agony with his Repel. Kyle Brokered into it and replayed it. Kai looked at his next card and prepared for Game 3.

Things were looking dire for Dirk in Game 2 of his match with Eric but he had a Looter working for him to find some answers. That answer came in the form of Scalpelexis. A couple of lucky mills and a Border Patrol later they were moving onto Game 3 as well.

It was even-stevens all around as Marco won his second game bringing all three matches to a deciding third game.

Kai elected to draw in Game 3 and both players kept their opening seven. The party got started on turn two this game with an Aquamoeba for Kyle Rose. Kai had nothing but land in the bottom half of the turn.

Kyle's hand must have been land heavy because he started discarding land to pump his Aquadog and played a Hallowed Healer. Kai played an Inkshrouder and passed the turn. 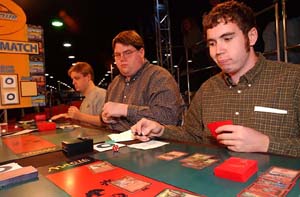 Kyle continued to discard land to pump the Aquamoeba and took Kai to 14. Kyle's hand was dwindling and Kai played a Whispering Shade.

Kyle took Kai down to 11 pitching his third straight land and nothing else. Kai was content to play a Swamp and pass the turn.

Kyle was finally out of land—and out of attacks with his Aquamoeba staring down the barrel of a 5/5 Whispering Shade. His Healer was Repelled at EOT. Kai played a Hapless Researcher and passed it back to Kyle who seemed out of gas at this point.

Kyle replayed his Healer but it met with a Ghastly Demise. Kai swung for three with the Shade and played Face of Fear to another round of raised eyebrows.

Kyle played a land and passed. Kai broke the game open with a Breakthrough for five keeping a hand of animals and spells and discarding an extra land.

Kyle passed the turn holding onto a Chastise. Kai swung with Face of Fear and Whispering Shade—pumping it to three. The Shade was Chastised and the damage and life gain were a wash. Zombie Assassin hit the table.

Kyle played a Mirror Wall. Kai Assassinated the Wall and cracked for five. Where before eyebrows were raised... now jaws were slack as Kai played a second (!) Zombie Assassin. He was still holding Crippling Fatigue and Afflict and when he pulled a Butcher the next turn it was all over.

I asked Kai about his sup bar creatures after the match and could only shrug. There weren't any better options for him to use. When I said his deck seemed like a collection of poor creatures and a Breakthrough to find them he could only laugh and agree.

Dirk was trying to cling to his third game with only three lands but it was not to be. The match would be decided by the third game of the Marco Blume and Norman Woods.

Norman was playing first but Marco made the one-drop with a Basking Rootwalla. Norman cast Innocent Blood on his next turn and both players made animals on turn three. Norman—Treacherous Werewolf and Marco—Ember Beast.

Norman was stuck on two land and he swung in for two while the Ember Beast was offline. Marco made a Nantuko Tracer and sent the turn back to Norman.

Norman missed another land drop and played a Patchwork Gnomes. Marco played a Barbarian Lunatic and passed the turn back to the Joka.

Norman sat back on a Syncopate and passed it to Marco. Marco attempted Seton's Desire on his Tracer and drew out the Syncopate. He then swung with both of his men. The Gnomes blocked the Tracer but Marco had the Sylvan Might to Trample over and deal six to Norman in combat.

Norman still had no creatures to drop on his turn and sent it back to Marco. Marco sent the same two men into the red zone with the same blocks. Instead of Sylvan Mighting before damage, Marco—sensing a trick, allowed damage to go on the stack and tried to save his man with the Might but it was Ghastly Demised in response. Marco played a Diligent Farmhand in search of his sixth land for Kamahl, Pit Fighter.

Norman made a Gravegouger on his turn. Marco played his second Seton's Desire on his Ember Beast and swung with it and the Farmhand. The Patchwork Gnomes absorbed the Beast went to eat the farmhand but Marco sac'd it to find his sixth land.

Norman Dematerialized the Ember Beast and was able to swing for four taking Marco down to 16. Marco played Kamahl and swung for six taking Norman to 2. The Fiery Temper in his hand sealed the win for the Phoenix Foundation.