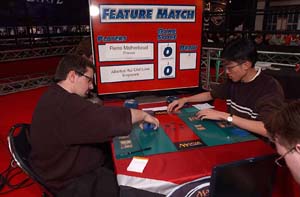 Consistent French performer Pierre Malherbaud is fresh from success in this format after winning Grand Prix Naples. His opponent, Albertus Law, is also no stranger to Grand Prix success and has Top 8 appearance from Pro Tour Barcelona on top.

Malherbaud has a solid green-black deck and is splashing red for some burn, a Pardic Collaborator and a Vampiric Dragon. Law has a quick green-red deck with plenty of burn.

Malherbaud got all three of his colours by turn 3 but didn't summon a monster until turn 4 when a Dirty Wererat entered play. This cooled off Law's attacking force of Leaf Dancer and Mad Dog but as Malherbaud was tapped out Law used a Firebolt to send the Wererat to the Graveyard after it had blocked the Mad Dog. Law then used Far Wanderings to dig a swamp out of his deck.

The first bomb hit the table as Malherbaud summoned a Pardic Collaborator, which then promptly left with the help of Ghastly Demise. Then Law brought in some Suirrels with an Acorn Harvest.

In his next turn Malherbaud pulled off a neat trick, casting Nostalgic Dreams and neutralizing the card disadvantage as one of the cards pitched was Fiery Temper. This took care of the annoying Leaf Dancer and Malherbaud even got his Wererat and Collaborator back out of the bargain.

Law had quite a few Squirrels now after flashing back the Harvest. Malherbaud dropped the Wererat and tried to enchant it with Seton's Desire only for Law to burn it in response with a Sonic Seizure.

Next turn the Collaborator came back. It was only one blocker and Law had plenty on squirrels to throw away. The Wererat proved to have plenty of lives as it came back a third time with Zombify.

Malherbaud didn't have enough blockers to kill all the squirrels and Law knocked him down low enough so he could finish the Frenchman off with a Mirari-doubled Firebolt from the graveyard.

Law didn't really get any quick offence. A Sonic Seizure ensured a Pardic Collaborator wouldn't run him over. Malherbaud replaced it with a Springing Tiger and Law cast Elephant Ambush at end of turn to match it.

The Tiger came in regardless and Law chose to let it through, choosing instead to race as a hasty Pardic Firecat sprung into the red zone on the heels of the Elephant. Malherbaud blocked the Firecat with a Twigwalker and Afflicted it. 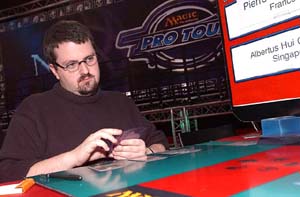 Law looked on the receiving end. His lone Elephant had just a Rootwalla for support while Malherbaud had Tiger, Werebear, Twigwalker and Fledgling Imp. The Fenchman cast Vivify for more beats and then turned the screw with a second Fledgling Imp.

Law was left with just a Rootwalla and 8 life. The next turn Malherbaud attacked with both Imp and a Werebear and then waited for Law to tap out to flashback the Ambush so he could safely give both Imp Flying and sac the Twigwalker to deal lethal damage.

Law had another iffy start. Only red mana and a Ravaged Highlands was his second land. He used a Firebolt to get rid of Malherbaud's Werebear and Malherbaud chose to take 5 damage to get rid of Law's Longhorn Firebeast.

Malherbaud looked to take advantage as an Ambush brought out an Elephant in Law's end step and gave it a Springing Tiger for company in his own turn.

Any thoughts of aggression were quickly put aside as Law summoned a Dwarven Strike Force to act as discouragement. Law finally found enough forests to cast an Elephant Ambush but his own attempts to get aggressive were thwarted as an Afflict made an Elephant trade in the red zone uneven. Law had to flashback the Firebolt in his graveyard to finish the other Elephant off. 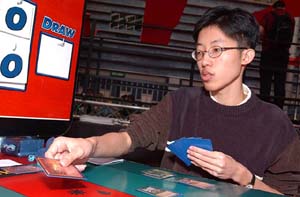 Malherbaud replaced the Elephant with a Dirty Wererat and Law chose this moment to switch the Strike Force from defence to offence. Acorn Harvest provided some sacrificial Squirrels to get in the way as Law fished out a Swamp with Far Wanderings.

The next turn was a big one for the Frenchman. He'd discarded a Pardic Collaborator at the end of Law's turn as he didn't have a red source and wanted to get closer towards threshold. He then drew a mountain in his turn. While this might normally have seemed ironic it was still massive for Malherbaud as he was able to pitch a Fiery Temper to the Wererat and kill the Strike Force. He pitched a Crippling Fatigue to gain Threshold, improving both Tiger and Wererat. A Seton's Desire on the Wererat provided a sweeper for the Squirrels and allowed the Tiger through.

Law was able to Ghastly Demise the Tiger but the Desired Wererat was effectively game. Law couldn't kill it and it would sweep any creatures he made. Eventually he ran out of creatures and it finished him off with the help of a Rootwalla.