Round 3: Raphael Gennari vs. Helmut Summersberger 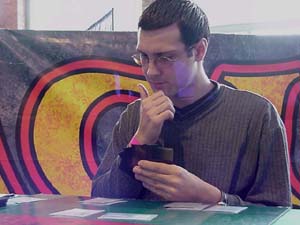 Raphael Gennari is the Swiss player who finished in the top 8 at Pro Tour New Orleans and also was the runner-up from Grand Prix Milan. Helmut Summersberger was one of two Austrian players who made the top 8 at the World Championships in 2000. He also made top 8 at Grand Prix London last year. Both are playing red-black decks splashing blue.

Gennari won the roll and opted to play first. He made the first play on turn 3 by summoning an Organ Grinder. Summersberger replied with a Cephalid Looter that surprisingly actually managed to live long enough to use its ability. Summersberger then summoned some Patchwork Gnomes to hold off the Grinder. So Gennari upped the offense by summoning a Dwarven Strike Force and sending it straight in at the cost of a swamp from his hand.

Summersberger summoned a second Lancer and the next turn Gennari sent in the Strike Force to trade with a Lancer and a couple of lands from both hands. A Waste Away removed the Organ Grinder and now Summersberger could go on offence.

A Skywing Aven flew in on Gennari's side and they both traded yet more land from their hands as the Aven blocked the Gnomes. Gennari pointed out he'd seen ten land and only four spells. His next two draws were pretty good as a Carrion Wurm plopped in as a discouragement to attack and a Gloomdrifter picked off two creatures of Summersberger. The irony being that Summersberger had given Gennari threshold by Mind Sludging the Skywing Aven the turn before.

Summersberger also had threshold and Shower of Coals and a Whispering Shade were enough to take game 1.

Gennari elected to go first again and again started with an Organ Grinder on turn 3. Summersberger brought out an Infected Vermin in his turn but the Rats were quickly Afflicted. Organ Grinder traded for a Rotting Giant while they raced with evasion creatures – a flying Skywing Aven on Gennari's side and a swampwalking Whispering Shade on Summersberger's side.

Gennari then got nasty, summoning in first a Carrion Wurm and then a Chainflinger. Summersberger used a Morbid Hunger to deal with the Chainflinger. It didn't buy much time as a hasted Dwarven Strike Force forced the Austrian to scoop the next turn.

Summersberger also chose to go first. Gennari had a tough choice over whether to keep a two Swamp opening hand but it paid off as he found an Island and was able to summon Phantom Whelp and then Skywing Aven. He then found his mountain just in time to Firebolt Summersberger's first play – Whispering Shade. A Pardic Arsonist came down as a mere Hill Giant on Summersberger's side and he cycled a Skeletal Scrying for one. He needed answers as Gennari's board now consisted of Whelp, Skywing Aven, Zombie Assassin and Dwarven Strike Force.

The Firebolt swung back to take care of Summersberger's Looter while another hit from the Skywing Aven took the Austrian down to nine. He summoned in a Balshan Collaborator to try and hold off the flier only for it to get sucked under a Faceless Butcher.

In control Gennari attacked with both the Strike Force and Aven. Summersberger was forced to throw the Arsonist in the way of the Dwarves and the random discard only took a Lunatic from Gennari's hand as he gave the Strike Force first strike.

A Morbid Hunger got the Collaborator back but Summerberger had no mana open and had to use it block the Skywing Aven.

The Cabal Patriarch that showed up on Gennari's side was a bit mean really and the gamble to keep the hand had paid off.