Round 3: Reiji Andou vs. Masashiro Kuroda 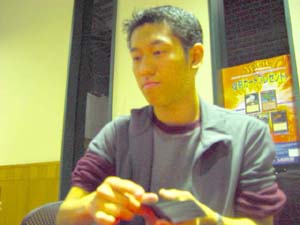 Two giants of Japanese Magic squared off in this, just the third round of competition. Reiji Andou, famous goofball member of Masters perenniels Panzer Hunters, with his Mono-Black Control deck in tow, against Masashiro Kuroda, lynchpin of both Poor Shark and Poor Shark 2. P.S.2 recently took the title at the 2002 Grand Prix - Nagoya, and will be looking to show their stuff at Pro Tour - Boston.

Kuroda dropped twin forests and Catalyst Stone before finding and island. Andou led with three swamps, and had no response to Kuroda's Wild Mongrel. Kuroda played a fourth land, a Centaur Garden, and Speculated for Wurms. He played one and passed it back.

Andou was ready with Faceless Butcher. It stood in front of the Mongrel. Kuroda did it in by pitching the fourth Roar. Then he made two tokens. Andou was in dire straits. With just four swamps in play he untapped. He held two Mutilates, Mind Sludge, Skeletal Scrying, Diabolic Tutor, swamp and Cabal Coffers. He played a swamp and Sludged Kuroda's hand.

Kuroda swung. He though hard before deciding fourteen damage was enough. He fingered his lone island. Careful Study put him to threshold, turning on his Garden as a safety net for Mutilate.

Andou looked at his hand and board and ran the calculations. They came out right. Cabal Coffers got him eight mana, enough to Mutilate twice for -10/-10, enough to circumvent the Garden. Kuroda pulled Werebear, and dropped both it and the final token. Andou's Diabolic Tutor fetched Mutilate #3, and they both went to the graveyard. Kuroda's draw did not add to his board.

That was the opening Andou needed. Skeletal Scrying put him at one, but got him two swamps and a Faceless Butcher. That went well with his Nantuko Shade that came into play. He gave it back to Kuroda. Kuroda dropped Cephalid Coliseum and used it, but it didn't turn up the win, and he conceded.

Kuroda brought in a pair of Squirrel Nests, Bearscape, Envelop and Grizzly Fate for his Wonders, Moments Peace and a Catalyst Stone.

Andou kept a two-swamp draw for Game 2, and watched Kuroda Mental Note into Roar of the Wurm, then follow up with Werebear. It was a good thing Andou was packed with Bloods and Edicts. Kuroda replaced it. Andou drew a non-swamp, and Edicted again. Another Note put Kuroda at threshold.

Double Mongrels hit the table to antagonize Andou. Blood dispatched one of them while still at two mana. Kuroda bounced back with Stone and Roar. Andou was in a tough spot. He ripped his third land and Mesmerized. Kuroda pitched his Deep Analysis and let him have a Mongrel. Then things got really bad. The Analysis turned up a Careful Study that put the second Roar in the graveyard. Andou chumped and took two. He drew another non-swamp, and scooped.

Andou pulled up another clunker for Game 3. This time it was swamp and Coffers as the only lands. A gambling man to the end, he kept. Kuroda kept his hand. 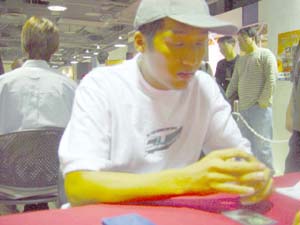 Innocent Blood took care of the first Werebear, and after missing one land drop, he pulled a swamp to enable Mesmeric Fiend. He saw Grizzly Fate, Quiet Speculation, Wild Mongrel and two Roars. He had a tough decision. He was holding Mutilate, Rancid Earth, Chainer's Edict, Screams of the Damned and Haunting Echoes. He chose the Mongrel.

Kuroda drew, played the forest, and thought hard before casting the Fate. Andou pulled Haunting Echoes, and was unable to punish him. Kuroda hit for four and Speculated for two Wurms and an Analysis. Then he cast Wild Mongrel. Andou needed a swamp.

He got it. His Rancid Earth got rid of the troublesome island. Kuroda's next attack brought him two twelve. Another swamp. Mutilate forced three pitches from Kuroda, to save his Mongrel in case of Chainer's Edict. It was a justified decision. Andou had just enough left over for the one in his hand.

Kuroda smashed in for six and dropped another Mongrel. Andou ripped Faceless Butcher just in time. The Mongrel hit. Kuroda tapped out for Squirrel Nest. Andou found a second Coffers to flash back his Chainer's Edict and catch the Mongrel while he could. Kuroda drew a fourth land and busted out a Roar, just in time to evade Andou's Haunting Echoes. After it resolved there wasn't much left in Kuroda's library. But with Nest and token in play, the onus was on Andou not to die. He chumped, and drew another swamp, giving the game to Kuroda.