Round 3:
The Relentless Race

Samuele Estratti came in sporting a white weenie deck that many Cube drafters malign, though he was doing quite well with it, running his way to a 2-0 record this far in the pod. Relying on incredibly efficient creatures backed up with just enough disruption, his deck was good against the other more controlling decks he had faced thus far.

Meanwhile, Alexander Hayne has a sweet deck. I mean, most Cube decks are pretty sweet, but this is something special. A perfect example of the Reanimator archetype, Hayne has dispatched both of his previous opponents thanks to the Recurring Nightmare/Survival of the Fittest combo that was good enough to give Brian Selden a World Championship win back in the day. 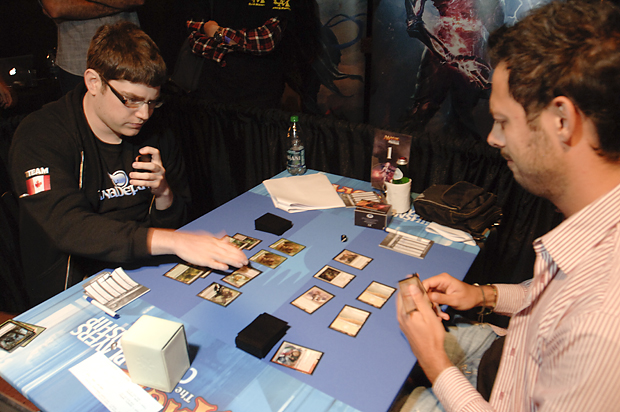 Both Samuele Estratti and Alexander Hayne had great success with their respective archetypes in the Cube Draft.

Hayne's deck was another of those decks with a heavy mana requirement, but he had a bit more support, and much more synergy than either of Estratti's other opponents. This was sure to be an interesting match.

"This isn't good. I've won the die roll but can't win the games I play first," Estratti said, possibly the only man to ever sigh when winning the die roll.

"Do you want to go directly to six cards?" Estratti offered with a grin.

"Heh, I'm not that superstitious," Hayne replied. "Do you want to let me play first?"

Both players got a good laugh out of that.

Estratti was first on the board with a Loyal Cathar, while Hayne simply built his mana with a Sphere of the Suns. Silverblade Paladin came down and teamed up with the Cathar, knocking Hayne down to 16 with his newfound double strike. Hayne still made no contribution to the board, and Estratti took advantage of the clear path to smash in with his two double strikers. Hayne wasn't completely defenseless, though, Dismembering the Paladin, saving himself a boatload of damage. Estratti added a Stillmoon Cavalier to his side to replace it, the protection from black possibly relevant against Hayne's black-green deck.

Hayne made a Garruk Relentless, providing a temporary stint of defense against Estratti's team, making a 2/2 Wolf token. Estratti lifted his Cavalier to kill Garruk and his Cathar traded with the Wolf, clearing Hayne's board and leaving Estratti no worse for the wear, really. That is until Hayne untapped and made a Massacre Wurm, clearing his board and leaving quite the monster.

Estratti repopulated his side, albeit slowly. He made a Figure of Destiny and passed the turn with four Plains up. When Hayne attacked in, he blocked and used a Restoration Angel to keep the Figure alive. Hayne added a Graveborn Muse and a Trygon Predator to his side after combat, leaving him down to one card. 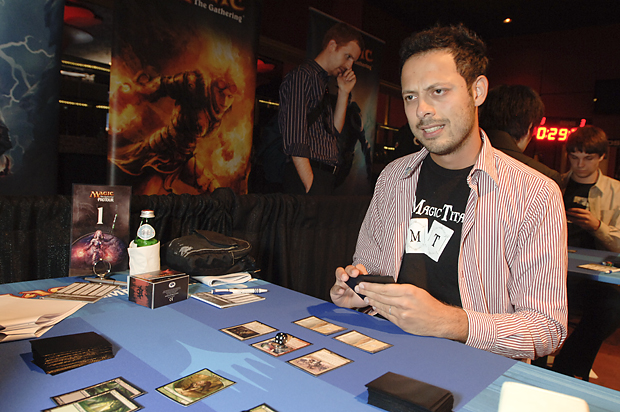 Tidbits of info, one word at a time.

After this nearly monosyllabic exchange, Estratti sent his Angel in to attack. After combat, Estratti made a Whipcorder and passed the turn with four Plains and his Figure of Destiny untapped. Hayne drew two cards on his turn, lost a life down to 10, and started thinking about his play. He was at 10, and if Estratti had another land, he could tap down Hayne's only flier, completely transform his Figure to an 8/8, and attack for lethal damage. After much thought, he sent his Massacre Wurm, which went unblocked, knocking Estratti to 10.

At the end of Hayne's turn, he powered up his Figure to a 4/4. After untapping, Estratti did what Hayne feared. He played a land, used the Whipcorder to tap down the lone flying creature on Hayne's side, and sent 3/4 and 8/8 fliers in. Hayne had nothing and packed up his cards.

The second game started off all Hayne. His Joraga Treespeaker, innocuously one of the best green cards in the Cube, powered out an early Primeval Titan.

Meanwhile, Estratti's deck fumbled. He made a Mother of Runes on the first turn, but Hayne used a Dismember to immediately deal with it. Past that, Estratti had no play until the fourth turn, when Hayne sent in a Kitchen Finks, Treetop Village, and Primeval Titan.

Estratti tapped his four Plains and made a Restoration Angel, blocking the Treetop Village, but at this point, he was dead, and he knew it. After drawing his card on his turn, he conceded the incredibly one-sided game.

After both players mulliganed in the final game, Estratti assumed the role he was supposed to, playing the first creature. His second-turn Whipcorder met an empty board from Hayne, and it was soon joined by a Figure of Destiny (you'll never guess when he drew it...).

Unfortunately, he was only on two lands, and Hayne was trucking along. When Hayne added a Garruk Relentless to his team, things looked really bad for Estratti. The planeswalker began churning out Wolves at a rate that outpaced Estratti's own creature production. All Estratti could do was continue to use his two Plains to play the occasional dork, such as a Leonin Relic-Warder, which had nothing to ward. Hayne upped the ante with a Shriekmaw to kill the Figure, and Estratti fell further behind. 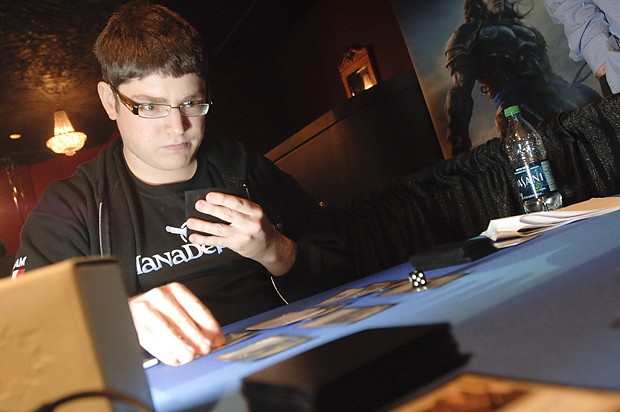 Estratti's deck provided him with a reasonable way to keep in the game, at least for the time being. His Mother of Runes would allow him to keep his creatures safe and perhaps begin to attack, something he would need to start doing to avoid giving Hayne too much time to draw something even more massive.

Unfortunately, Estratti never got the chance. Hayne decided to flip his Garruk to kill the Mother of Runes, leaving Estratti with a significantly underdeveloped board, facing down an army of creatures. His Whipcorder valiantly tried to stem the tide, but his life fell away, chunk by chunk. When Survival of the Fittest hit play soon thereafter, the match devolved into elementary Magic. Hayne had more Wolf tokens in play than Estratti had total permanents, and it didn't take long for these Wolves, and a little help from a Phantom Centaur and Big Papa Ramp (Primeval Titan), to finish things off.