Round 3: The Rock and his DragonCon vs. Huey Brock and Linde 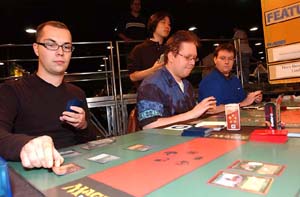 The members of The Rock and his DragonCon are preceded by a hefty reputation. Tomi "Jelly" Walamies smashed through to the finals at Pro Tour - New Orleans just last year. Jens Thoren's had a banner year, too, following up his second-place finish at Pro Tour - San Diego with a fourth at Pro Tour - Osaka.

Those credentials will do little to unnerve their opponents, Huey Brock and Linde. Probably the most relaxed team in attendance, front man William "Baby Huey" Jensen's trademark shrug says it all. He, Brock Parker and Matt Linde have been playing together since forever. No sense mixing it up for the teams PT when you can just play with your friends. They also happen to have some talent for the cards. Linde's a former American National Champion, Parker took Grand Prix - Turin with Horse Thieves, and Jensen's résumé stretches to the horizon.

When building their decks, The Rock and his DragonCon tried to put their decks in seats where they expected favorable matchups. After the first turns against Huey Brock and Linde, they could see that all that planning had gone down the tubes. They were playing the very matchups they'd hoped to avoid.

In the first seat, Linde was taking care of business against a land-stalled Thoren. Syncopate stopped Angelic Wall, and then he took to the air with Dusk Imp and Gloomdrifter. Thoren tried to race with Phantom Nomad and Strength of Isolation, but unable to answer the fliers, they were quickly on to Game 2.

Jensen was also on the wrong end of some quick beats. Walamies opened with Chatter of the Squirrel, Nantuko Tracer and then Flame Burst for Jensen's Puppeteer. Vigilant Sentry tried to hold things up. Walamies came back with Petravark, keeping Jensen to just one island. Psionic Gift answered the one-toughness guys, but Walamies had more power in reserve, thanks to Grizzly Fate. Still, Jensen was just starting to take control. 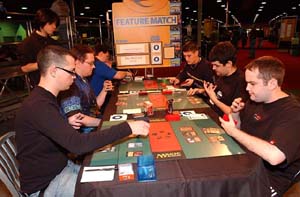 Parker was short on red mana in his match against Sadeghpour, but Seton's Scout, Nullmage Advocate and Springing Tiger were excellent beatdown. Mountain showed up just in time to get rid of an offending Dreamwinder. Sadeghpour blocked and traded as best he could, but even with Gravedigger's help he was soon on an empty board at five life facing Rabid Elephant and Ember Beast.

Linde's hand for the second game was primed for racing, holding Repel and Churning Eddy. He resolved a turn-four Painbringer, a very bad situation for Thoren's blue-white. The next turn he threw down Soul Scourge, setting up a devastating turn where he Churning Eddied Thoren's Windreader with enough mana to Syncopate it on the way back down.

Walamies couldn't find enough damage to push past Jensen's defenses. Browbeat dropped him to three, but Prismatic Strands traded with the Bear tokens. With Walamies out of gas, Jensen took the time to Scrivener the Strands back. Walamies hit threshold for his flashed-back Fate too late, as Jensen was ready to race with Thought Devourer and Strands. Walamies scooped it up.

Sadeghpour soon followed suit, having bought a bit of time with Aether Burst, but still facing Crashing Centaur and Ember beast. At the far end Linde celebrated by giving his team the first match win.

Huey Brock and Linde 1 - The Rock and his DragonCon 0

Parker's second game against Sadeghpour was sick. Sadeghpour kept a slow hand that needed to draw an island to turn into something better. While he played out three swamps, Parker fired out Seton's Scout and Lithatog. Sadeghpour's fourth land was Bog Wreckage, so again he had no play. Parker made Liberated Dwarf and passed it back. Dirty Wererat fell to Sonic Seizure at end of turn. Sadeghpour blocked with his face and made a Gravedigger.

Parker untapped. He double-checked the math, then floated four and ate all his lands. Swelter hit the Digger and his 'Tog, and he came across the empty field for the match.

Huey Brock and Linde 2 - The Rock and his DragonCon 0 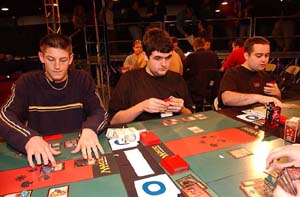 That seemed to take the wind out of Walamies's sails, helped out by Huey's seeming stabilization at eleven life.

"I've had more fun at the dentist." - Tomi Walamies

But then Huey hit a land pocket and Walamies found the third forest for his Beast Attack. It was a short road to victory from there.

For the final, though not deciding, game Jensen kept a three-island hand with Puppeteer, Cephalid Retainer, as well as Angelic Wall and Nomad Decoy should he draw a plains. Walamies mulliganed and then played three successive mountains with no threat. Jensen failed to find a fourth land, and then Walamies busted out Petravark. The fourth island showed a little too late. From there Walamies played Pardic Arsonist and Rabid Elephant, starting the beats. Another island let the Retainer come out, but blocked the incoming Petravark and fell to Muscle Burst. Jensen's plains showed up just to be scooped off the playing field.

Final Result: Huey Brock and Linde defeat The Rock and his DragonCon 2-1