Round 3: Rui Mariani vs. Laurent Pagorek 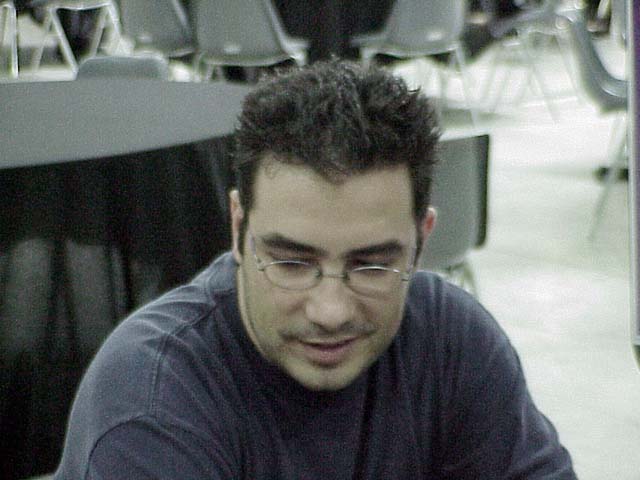 Two old-timers crossed paths in this third round feature match. Rui Mariani is one of Portugal's most famous players, mostly known for his Pro Tour Rome Top 32 and several Grand Prix Top 8s. Laurent is a perennial French player who most would recognize since he has attended almost every European Grand Prix.

After a mulligan from Pagorek they got the game underway with a second turn unkicked Titan from Rui. Pagorek opened with a Tsabo's Web, tapping out. Mariani took the opportunity to play a Fires of Yavimaya and Laurent dropped an ever-lasting blocker: Nether Spirit. Again he was tapped out but the best Mariani could do was play another Fires.

Finally Laurent got a chance to counter some spells when he passed the turn with mana untapped. Or at least he thought so, but a Kavu Chameleon showed up thwarting that idea.

The Spirit blocked the Titan but Mariani saved the it with a Fires. On his next turn Laurent returned the Spirit and dropped an enigmatic Urborg Volcano that startled the Portuguese.

He tried to play a third Fires but by then Pagorek had enough of that and countered it with a Counterspell before dropping a second Tsabo's Web to draw an extra card. They played Draw-Go for a while with the Spirit stopping the Chameleon until Mariani tried to play a Saproling Burst that got Undermined.

The Frenchman then played a Fact or Fiction turning over four lands and an Undermine.

Pagorek: "Nice one."
Mariani (giving Laurent the Undermine): "This one was easy."

Rui again tried to break the deadlock with a kicked Kavu Titan but Laurent again Undermined his plans. Intriguingly the Spirit finally got bold and attacked Mariani. The answer was simple: Laurent wanted to play another one.

Mariani tried to play a Shivan Wurm only to see it Undermined.

The Spirit again attacked only to brought down by the Chameleon. Mariani untapped and casted a second Chameleon. Laurent Undermine, only making Mariani lose three life, it to bring the Portuguese into the reach of a Urza's Rage that he had in his hand.

Laurent: "It was a good mulligan."

They shuffled in a relaxed silence broken only by the antics of the Pete Norris - Tom van de Logt game on the other side of the score panel. This time they both kept their hands with Laurent again commenting on Rui's amazing ability not to play a first turn creature.

Mariani's first creature was a Yavimaya Barbarian quickly followed by a Fires of Yavimaya taking advantage of Laurent's come into play tapped. When his lands untapped Laurent tried to kill the Barbarian with an Urza's Rage.

The Portuguese took advantage of the opportunity to launch a Blood Oath, naming Instants to get nine damage in and see Pagorek's hand, revealing an Undermine, Accumulated Knowledge and a Counterspell. The Barbarian died and Mariani now knew what to expect. He dropped a Kavu Chameleon giving Pagorek a turn to find an answer.

And indeed he did: Meekstone of the Accumulated Knowledge. He placed on top the Chameleon laughing and got a smile out of the Portuguese as well. With the Kavu stopped Laurent then played two Tsabo's Web while Mariani tried to find a way to deal the last, and oh so elusive, three points.

When Pagorek finally found a Nether Spirit the sighing Mariani lapsed into deep thought mumbling something about being very tired. The Spirit started swinging and a Blastoderm was Excluded to give the French an extra card.

With the Birds and the Fires on the table Mariani only needed one final point of damage. He struck again on the next turn with a Flametongue Kavu. Laurent let the Kavu come into play but then Terminated it away before it could do any damage.

The next attempt was a Kavu Titan with kicker. This time the answer was devastating: a Tsabo's Decree that ripped another Kavu out of Mariani's hand.

Mariani (shaking his head): "That sucks."

Still the Spirit pounded in and not even an attacking joke by the Birds seemed to shake the French. Mariani drew and played an Elf but Pagorek took the chance to Undermine it bringing the Portuguese down to nine.

The French played a Fact or Fiction, which the Portuguese split as follows.
Pile one: Terminate, Undermine, Accumulated. Knowledge.
Pile two: Nether Spirit.

Took the big pile and Terminated the Birds. On the next turn Pagorek got the second Spirit and with Mariani knowing he had an Undermine in his hand was one turn away from victory. Another attack brought the Portuguese down to one and another draw didn't give him any answered forcing him to concede after trying to cast a Blastoderm.