he brothers Ruel sat down and began with some frantic dice rolling, said hello to their mum at home (see above), and then decided with their rolling who would play first, who would sit on what side, who would buy dinner, and probably a few bits and pieces in French that wouldn't translate. 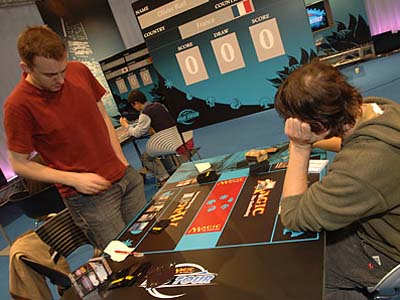 Olivier Ruel searches in his pockets while his brother Antoine waits.

Olivier explained which deck each of them was playing (Antoine was running a red deck splashing blue for Psionic Blast and Vesuvan Shapeshifter, while Olivier had four-colour control-largely black-blue, but with a little of everything but green).

"I wish I'd paid more attention to your deck!" declared a slightly narky Antoine as he listened to the details of his own. He had a mulligan to five, and followed up with two Keldon Marauders on consecutive turns. "Mulligan to three?" asked Oli with a smirk.

Sudden Death killed off one Marauder, while vanishing finished off the other. Antoine was pretty quickly out of gas off his mulligans, playing a Sulfur Elemental that quickly died then suspending a Greater Gargadon. He made a Kobold with Kher Keep, but had little to go with it.

Olivier played Mystical Teachings, finding a Careful Consideration. Having played a land every turn, and facing down little in the way of damage with a full grip of cards, he seemed pretty safe, even when Sulfur Elemental came out for his brother. .

Olivier played Void, to which Antoine responded by sacrificing his Sulfur Elemental and Kobold token to Greater Gargadon.

"You're worried about Void for zero?"

Olivier named one, and missed getting Fiery Temper-no great loss considering the madness cost of the spell. Another Sulfur Elemental came soon after, and was hit by Snapback to save on awkward amounts of damage. Antoine then suspended a second Gargadon and passed. Olivier was on 10 but had plenty of cards and mana, and he soon dropped his first bomb in the form of Bogarden Hellkite. That forced a sacrifice of the returning Sulfur Elemental and got in for the first damage to Antoine himself.

The first Greater Gargadon came down but was hit by Snapback, only to be re-suspended. Meanwhile, Mr. Hellkite came in with a roar to take Antoine to 12. Word of Seizing allowed Antoine to crack back with the dragon and then sacrifice it to take his brother to 5 and put each of his Greater Gargadons on eight time counters. Maybe he was planning for a big Dragonstorm turn? 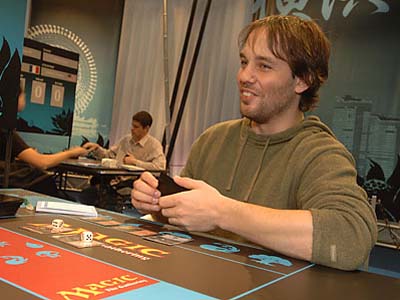 Antoine may be older, and he might even be wiser…

At the end of turn, Olivier flashed back Mystical Teachings, and after a concerned glance at his hand, he picked out another Teachings as his instant of choice. This soon got played, finding another Careful Consideration. Antoine threw Fiery Temper at his brother, but it hit a Cancel. Antoine wouldn't be able to slowroll a Sudden Shock just yet. Olivier played a main phase Careful Consideration, discarding Void and Mystical Teachings and passed.

The Gargadons were now down to six time counters each, and all that Antoine had to put into play was a morph (which had to be Vesuvan Shapeshifter). A couple of Kobold tokens were sacrificed to bring down the clock on one Gargadon, and Antoine sacrificed four lands to get it all the way. A Snapback (Oli's last) was waiting. There was now just the matter of the other Greater Gargadon waiting in the wings. Damnation forced Antoine to sacrifice his morph and Haunting Hymn took out Antoine's two Gargadons in hand. The big issue would be if Oli could deal with the final Gargadon who was still on his way. He flashed back another Mystical Teachings, looking for an answer, only for Antoine to respond with Fiery Temper. Oli was now at 2, but the Teachings did find him a Cancel.

Antoine had little action, and sat back as Oli used another Teachings in his following end step to find Tendrils of Corruption. Olivier had plenty of lands out (including Urborg, Tomb of Yawgmoth), such that the Tendrils was not a good thing for the red deck whatsoever. There was also an Aeon Chronicler suspended with one counter, who both attacked Olivier down to 5 and gave him a target for the Tendrils if need be. When Antoine tried the Gone half of Dead // Gone, there was a Dismal Failure to stop the spell and empty his hand.

A turn after, Olivier revealed his hand, which was more than enough to force the concession from his brother.

"If you could be me, you would," declared Olivier as he sideboarded.

After sideboarding, the fourth colour of Olivier's deck kicked in, with Pull From Eternity and Honorable Passage both becoming valuable additions at the expense of some of the worse options in his main.

"The good thing about playing a deck with 27 lands is that sometimes you can cut one of them from time to time when you don't know what else to take out."

Each of the Ruels had a mulligan for Game 2.

Antoine, who had already mulliganed twice in the first game, told his brother that "If you keep being this lucky, I'm going to tell mum."

There were no more mulligans, and the game began. Antoine kicked of with Jaya Ballard, Task Mage, who got hit by an Urborg-powered Tendrils of Corruption. Antoine kicked back with Avalanche Riders, to get rid of the offending Urborg. Another Tendrils (slightly less impressive, but just good enough) finished this 2/2 off as well.

Irked at his empty board, Antoine played a couple of Sulfur Elementals with which to beat down. One fell to Dead, and was replaced by Keldon Marauders. Void for three hit the Elemental as well as a Fiery Temper, which was played via its madness cost. Antoine had more Marauders, but they all died to Damnation, plinking for a little on the way out.

In virtually no time, Olivier was on 8, but now he had land and enough time to cast Careful Consideration. This brought him a Disintegrate to kill the lone Blood Knight on Olivier's side of the board, and indeed to start flashing back Think Twice. It seemed that now that Antoine was having trouble finishing things off, though he was stockpiling three cards in hand. Oli wasn't too worried, though, flashing back Mystical Teachings to find another Mystical Teachings and making a similar play the following turn. 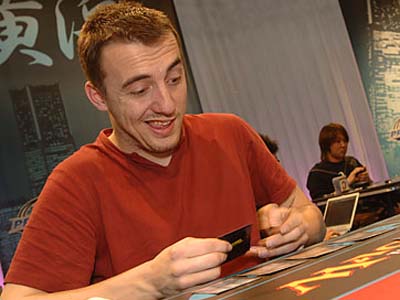 …but the younger Ruel takes the day.

Finally, a Teachings found a Dismal Failure. Olivier had all the cards, if not all the life. Of life, he appeared to have enough, in the short term at least, as all Antoine did was suspend a Greater Gargadon. More Teachings came, this time for Think Twice, followed by a Terramorphic Expanse finding a Plains. All Antoine could do was suspend Greater Gargadon.

Olivier played a Void for one, seeing only a Word of Seizing in his brother's hand. Knowing it was there, he seemed happy to sit back, build mana for a while, and draw a few cards with Aeon Chronicler, who was suspended for two turns.

When Olivier flashed back another Mystical Teachings for an Honorable Passage and showed his brother his hand of cards, this was enough for the full concession.