Round 3: Samson Wong vs. Rudy LaFaber 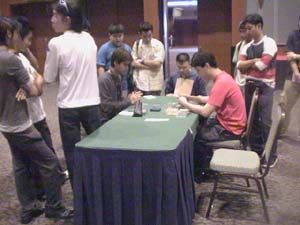 Samson is a former Singaporean National Champion and Rudy made Top 8 at Malaysian Nationals last year, though for all their glory they each enjoyed only two byes.

This game was a lesson in card quality.

Rudy chose to play first, but it was Samson who had the first play of the match with Diligent Farmhand. LaFaber answered with Rites of Spring for two and passed the turn. Samson swung with the Farmhand and passed, choosing not to sacrifice it at the end of LaFaber's turn. He had a Mystic Familiar in his hand which he was unable to play because he did not have a Plains, but his hand did not contain much else in the form of beatdown (Painbringer and Demise) and he was content with just attacking again with the Farmhand.

LaFaber cast Diabolic Tutor for Beast Attack, holding Gurzigost, and a newly TD'd Zombie Infestation. Looking at both hands I could see the following turns would be pretty one sided.

And what a savage beating it was! Samson showed skill and quality by drawing the Plains he needed to cast the 1/2 flyer without getting the Farmhand to go look for it. Rudy, on his fifth turn, decided he couldn't be bothered baiting Samson with his Beasts, and so tapped out for Grotesque Hybrid instead!

Samson drew and passed, and Rudy sent the Hybrid to the trenches. On the next turn the Farmhand got ambushed by a Beast. He replayed the Farmhand via Morgue Theft, but when Rudy flashed another Beast into play, Samson's reply of Painbringer (Only the Theft in the graveyard) was ironic at best. Meanwhile, the Hybrid and the initial Beast token were doing some mean double teaming, and there was just not very much Samson could do.

After Rudy dispatched the Painbringer with Patriarch's Desire it was on to Game 2. 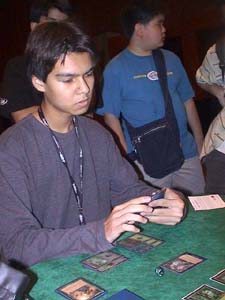 Samson chose to draw first. Rudy kept a hand yet again with Rites of Spring and Werebear, ensuring he could get a fast start. The hand Samson chose to keep was really very slow - he had a Krosan Archer, and a Hybrid of his own as his earliest plays.

The Werebear hit the table and swung for one. LaFaber then cast Rites of Spring for two to fill up his graveyard as he had a Gurizgost in hand! Samson TD'd a Call of the Herd and suddenly his hand looked a lot better. Rudy used his Werebear to make a very ugly turn-four Hybrid, and Samson answered with a Nantuko Disciple. The Hybrid entered the Red Zone, and on the fifth turn, Gurzigost hit play.

Samson was not to be outdone, however, as he had a cunning plan. Playing a Hybrid of his own he would ensure that damage from the Gurzigost would be minimized, and after the initial scare of Rudy's quick start he could count on the Disciple to attend to any more uncouth behaviour.

And that's exactly what happened. Gurzigost managed to deal six before being scared to death by the flying undead Big Bird. This left Samson on ten life. LaFaber's steam had run out. He passed, and Samson played Mystic Familiar.

Rudy's hand had the ferocity of a crippled rabbit. Post Gurzigost he had Sandstone Deadfall, Wild Mongrel and Crypt Creeper. Simply put only the Mongrel may eventually be big enough to break through the Disciple barrier Wong put up, and the Deadfall would only really be useful if he was in trouble.

And so Rudy played the Mongrel, Deadfall and said go. Samson sent the Mystic Familiar on a suicide mission to empty Rudy's hand, and eventually both Hybrids were traded for each other. From then on the rest was purely academic - with the Disciple in play and Rudy having no way to get rid of it, Samson's subsequent dorks just beat Rudy into submission. Hypochondria sealed LaFaber's fate. 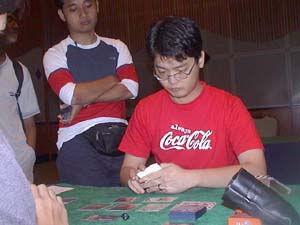 Game 3 LaFaber elected to play first and once again had Rites of Spring in his opening hand but no Green mana. He also held Beast Attack and Fledgling Imp. Samson's hand for once was looking punchy - it had Call of the Herd and Basking Rootwalla. Go Odyssey block! To cut the story short Samson made Rootwall and swung for three, then on turn 3 cast Call of the Herd. LaFaber was up against the wall as his Imp was irrelevant and not having sufficient Forests had to Diabolic Tutor for one. He managed to draw another one but was still one Green source away of playing his business card of Beast Attack to get back into the game.

Samson missed his fourth land drop and so played the Diligent Farmhand he drew. The Elephant and the other pseudo 3/3 did their job admiringly however and the Call would definitely be flashed back next turn, putting up yet even more pressure. A LaFaber Rootwalla was Madness'd into play via the Imp, but Samson had Demise.

Then LaFaber attempted to play Beast Attack with only two Forests. How embarassing. Amid the trumpeting of Elephants and the sizzling, crackling agony of manaburn, LaFaber went down.