Round 3: Sharing is Special

s both these players settled into the feature match area, I asked them what their record was so far. They both said 1-1, but Olivier chuckled, saying "But I have one little problem: my deck is terrible."

Hoaen, who had the chance to watch the end of Olivier's previous match, knew he was playing a four-color Gifts concoction sporting Yosei, Kokusho, and Greater Good. Hoaen said he'd tried the same deck while practicing for the event.

"That deck looked like fun. I won in the casual room [on Magic Online] all the time, but once I tried playing it in the eight-man tournaments I couldn't win a match." Olivier grinned. "Yeah, that sounds about right." Though it's not required by the rules, Hoaen was a gentleman and let Olivier know that he was playing blue control splash black, since he'd had the chance to scout his opponent. 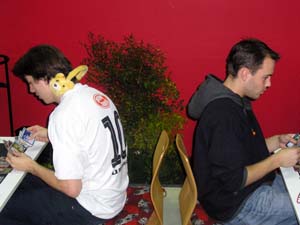 Essentially a control-on-control matchup, the first blow landed when Olivier resolved a Gifts at the end of one of Hoaen's turns, revealing Nightmare Void, Sensei's Divining Top, Yosei, and Last Gasp. Hoaen let him have the dragon and Last Gasp, but the key moment was next turn, when he was able to use a Hinder to send the Nightmare Void to the bottom when Ruel dredged it up next turn, avoiding what could have been a devastating threat. Kokusho ran into Mana Leak, and Hoaen began to pull away as an active Jushi Apprentice began filling his hand. Things got even worse for Ruel when Azami, Lady of Scrolls, joined the table.

Olivier tried a Yosei but it ran into another Mana Leak, and Hoaen drew another two cards. Olivier had a fist of cards, but Hoaen added another Jushi Apprentice to his board and was now drawing a devastating three extra cards every turn for zero mana.

Olivier's brother chose this moment to lean over from the adjacent feature match table, asking if Olivier was winning.

"Almost! I think I win next turn," Oli said.

Everyone that could see the board had a good laugh at that one. Instead, he had yet another expensive spell countered while Hoaen continued to draw obscene amounts of cards. A couple more hopeless turns and it was over. Olivier scooped up all his cards in play and in his graveyard, and I think all together it was almost as big a stack as Rich's hand. 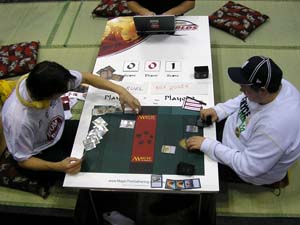 A view from high atop the Feature Match bridge.

Olivier had a very smooth draw for this one, playing out Top, Sakura-Tribe Elder, and then Kodama's Reach, which ran into a Mana Leak. Hoaen was stuck on two land, but had another Leak for Reach No. 2. Things looked up considerably for Rich when he found a Dimir Aqueduct. With only one land untapped he was vulnerable this turn however, but the French player had to settle for a disappointing Farseek.

Ruel tried for a Yosei on the next turn, but it ran into a Disrupting Shoal pitching Yosei's buddy Keiga. At this point a Journeyer's Kite began pulling Rich out of his mana problems and Olivier looked to be running out of gas just as Rich was ready to bring that fist of spells to bear.

At one point it looked like Ruel might be able to climb back into the game when he was able to resolve a Gifts Ungiven in his main phase. That is, it looked that way right up until Rich untapped and cast a Persecute on black to empty his opponent's hand of all three cards. Ruel brought back a Nightmare Void and saw a nasty grip of triple Meloku, and currently he didn't have an answer for the one that would clearly hit the table.

He sent Meloku No. 1 to the graveyard, but No. 2 came into play with 3 mana to cover it. Ruel brought back the Nightmare Void to take out the last Meloku, but even though it was Nightmare Void 2, Meloku 1, that single Meloku looked to be more than enough to put the game away. 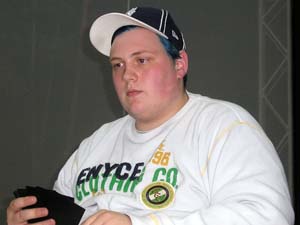 However, Ruel was able to use shuffle+Top tricks to find a Putrefy and take out the Meloku that managed to hit play, which resulted in six tokens. As bad as it still looked, it still wasn't over though, as Ruel next had Hideous Laughter to wipe the board.

The game seesawed away from Ruel yet again however as a Jushi Apprentice put things back in the grim column. Ruel ripped a Gifts for Defense Grid and Hideous Laughter (sending Wrath of God and Last Gasp to the 'yard), but Jushi Apprentice soon flipped and was joined by Minamo, School at Water's Edge.

Hoaen began swinging in with Tomya, the Revealer, then untapping the Legendary Wizard at the end of the French player's turns to draw cards by the fistful. One turn, then another of that and it was all over. Ruel could only shake his head.

"Who told me this matchup was playable?!"