Round 3: Sigurd Eskeland vs. Olivier Ruel 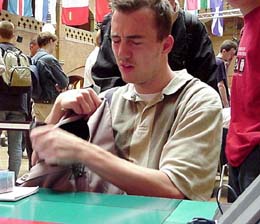 In the third round of the 2002 European Championship, Sigurd Eskeland from Norway faced Olivier Ruel from France. While Olivier has been around a lot lately, Sigurd has been absent from the scene. His last Pro Tour was in New Orleans. After New Orleans, he fell off by missing the following Tour by one single Pro Tour point. He also managed to lose in the finals of a qualifier tournament. Then he started working, giving him less time for Magic.

Olivier chose to play first, and kept his hand. Sigurd kept as well, and three lands came into play before Olivier got an Ironshell Beetle on the table. He also attempted to cast a Nullmage Advocate during his following turn, but Sigurd had a Syncopate and stopped an early creature rush.

Sigurd's first creature was quite good, a turn three Cephalid Looter. Ruel got out a Phantom Tiger and kept hitting with his Ironshell Beetle. He didn't have an answer to the Looter, however, and Eskeland started using it as soon as he could. The Norwegian then got out a Wormfang Turtle that stopped the Frenchman's attackers quite effectively.

Ruel seemed to have stagnated a little, while Eskeland were doing just fine. He looted again, then he used an Aven Fogbringer to return Ruel's one swamp to his hand. The Frenchman answered by casting Insidious Dreams, choosing to draw an Elephant Guide first and then a Skeletal Scrying. He used the Elephant Guide to pump up the Phantom Tiger, and after attacking with it, Eskeland was down at ten life. Ruel then Ghastly Demised the Cephalid Looter, getting rid of that problem.

Sigurd started to attack with his Fogbringer, which seemed puny compared to the fat Tiger. But Eskeland had an answer to that problem, he discarded a Wormfang Drake and then used a Waste Away to put the Tiger into Ruel's graveyard. The Frenchman got a 3/3 Elephant Token as a consolation. He also used Skeletal Scrying, digging into his library.

Ruel then played an Exoskeletal Armor on his Beetle, which suddenly grew to 6/6. He then attacked, and Sigurd chose not to block, going down to four life. Sigurd then attacked back to bring Ruel down to eleven, and then he summoned quite a threat—an Organ Grinder.

After chumping the Beetle with the Turtle, Sigurd got rid of the threat by using a Toxic Stench. Suddenly, the situation looked much better for the Norwegian. The Fogbringer took Ruel down to nine life, and an Earsplitting Rats came into play. Ruel attacked with his 3/3 elephant, and Sigurd was down to one life. The Frenchman also cast a Mesmeric Fiend, but it was too late. Eskeland activated the Grinder, taking Ruel down to six life. Then he attacked with the Fogbringer. Ruel attacked back with his two creatures, but Sigurd could block both and still activate the Grinder—and at one life, Ruel had no way to stop the Fogbringer from finishing him off. Ruel chose to play first in the second game as well. He got a pretty good start, playing a turn two Werebear and then a turn three Basking Rootwalla, Unhinge, forcing Sigurd to discard an island. Eskeland got rid of the Rootwalla by a turn three Crippling Fatigue, but Ruel didn't really care—he summoned a turn four Carrion Wurm.

Eskeland didn't seem to have any obvious answers. He stole the two cards in Ruel's graveyard using a Gravegouger, only to take six from the Carrion Wurm. Ruel also cast a Nantuko Disciple, adding one more creature to his side of the table.

But Sigurd had a plan, and it was good. The Norwegian slapped a sideboard card into play—a Mists of Stagnation. With no cards in his graveyard, Ruel was pretty lost. "So I don't untap," the Frenchman said dryly, and attacked with his disciple to take Sigurd down to twelve.

Eskeland wasn't worried at all. He had two cards in his graveyard, but he wanted even more—so he cast Mental Note, and all of a sudden, he could untap five permanents. "Jesus, I'm good. I'm so good," he grinned, while Ruel mumbled "I know". The Norwegian then cast a Soul Scourge, a Cabal Trainee, a Wormfang Drake, and flashing a Syncopate to the frustrated Frenchman, he got the concession he wanted.