Round 3: Silence Marks The Match

those who were having their Battle of Wits lists deck checked watched on, the competitors in this match shuffled up in silence. Both players have played in many Tours and have emerged as true professionals. Where younger, more care-free players would engage in witty banter and wear the game state on their faces, these two were all business. A majority of the words spoken might have been "go" as both took everything in stride and kept their heads in the game. 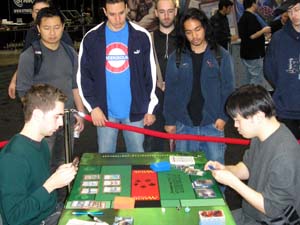 Veterans of the game, Jeff and Itaru played on in quiet concentration.

Itaru Ishida won the flip and used Last Gasp on Jeff Cunningham's first-turn Arcbound Worker, and another on his second-turn Dark Confidant. That seemed to clear the way for Cunningham to play Erayo, and on his fourth turn Cunningham followed it up with Ornithopter, Arcbound Worker, Thoughtcast and finally Frogmite off the Thoughtcast to attempt to flip Erayo -- but Putrefy killed him before the trigger could resolve.

Ishida started up his from the Loam engine, furiously cycling, sacrificing and bringing back lands and pausing only to use Cunning Wish to find a board-clearing Hideous Laughter. With so many one-toughness creatures in Cunningham's deck, a Darkblast was enough to shut down the few remaining threats he could come up with and Ishida steadily accumulated more and more extra cards.

Cunningham could only look on and try to nibble him to death with cards like Arcbound Worker and Blinkmoth Nexus. After a long search, he finally found a Psychatog near the bottom of his deck. After a mare verified that the coast was clear, he used the Psychatog to finish Cunningham off in one 20-point blow.

Both decks were set up well for this matchup, with Ishida going so far as to maindeck Oxidize, so neither devoted much sideboard space to it. Jeff could have brought in any number of cards, but knew better than to damage his Affinity engine. 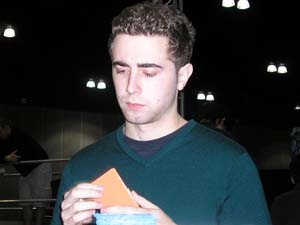 Jeff got off to a quick start thanks to Dark Confidant

Game 2 represented the opposite scenario. Cunningham led out with a first-turn Dark Confidant thanks to Chrome Mox. Going second, Ishida needed a quick start to prevent being overwhelmed by a combination of card advantage and pure speed but could only play a Lonely Sandbar on turn one.

Falling behind on tempo, Ishida could only use a Counterspell on his second turn but Cunningham managed to play multiple threats each turn with the help of Dark Confidant. Unable to find a mass removal spell that could stabilize the board in time, Ishida quickly died and the players moved on to Game 3.

The final game opened with a Cabal Therapy on Last Gasp, which missed revealing a hand of three casting-cost goodness and a Darkblast that took out the Arcbound Worker Cunningham had put out with a Chrome Mox. A second Cabal Therapy took out Psychatog, but he did not have enough threats to put pressure on Ishida.

Meanwhile, Ishida Putrefied the Chrome Mox o leave Cunningham with only two mana and used Darkblast and from the Loam to start his engine running. An Arcbound Worker went to work using a Blinkmoth Nexus as cover against a potential Darkblast but it could only do one damage per turn. 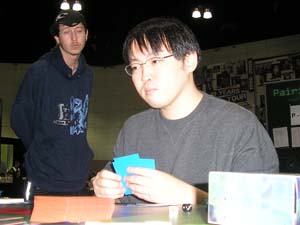 Ishida needed help to get his Life of the Loam engine going.

Ishida, however, was running into a problem: He had been forced to put his cycling lands into play earlier, and while he was rapidly establishing a strong mana base he was unable to turn his from the Loam engine into extra draws from his deck.

When Cunningham found an Arcbound Ravager, suddenly Ishida was once again under real pressure as Cunningham committed most of his resources in an attempt to win the game before Ishida could retake control. On the last turn before he was going to be killed, he found a to remove Arcbound Ravager without letting the counters on it relocate. On the next turn he drew his second cycling land to put his engine into overdrive by drawing multiple cards off each from the Loam, and for the first time Cunningham looked visibly frustrated. A turn later Psychatog came down and it quickly proved lethal to win Ishida the match.