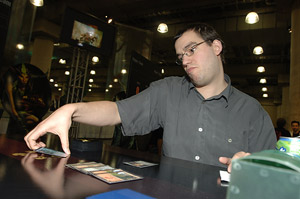 Andre Müller shrugs and goes for it. Tsumura is generally credited as being one of (if not the) best players in the game today. The former Player of the Year's accolades are plentiful, and he entered the third round of the 2007 World Championships undefeated. That said his opponent for the round, German player Andre Müller, is no slouch himself. He entered the matchup fresh off a finals finish at Pro Tour–Valencia with six match points himself.

In the first game Andre led with Terramorphic Expanse, played from his hand almost automatically. Kenji in contrast considered carefully even what his first land drop would be before revealing a Llanowar Elves for Gilt-Leaf Palace. Instead of playing the Elf, however, he paid 2 life to Thoughtseize. Andre revealed: 2 Mountain, Search for Tomorrow, 2 Wall of Roots, and an Aeon Chronicler. Kenji took the blue card and passed.

Andre made a Wall of Roots and suspended a Search for Tomorrows while Kenji went to work on developing his mana base, adding two Treetop Villages, two Llanowar Elves, and a Wren's Run Vanquisher to the board over the course of two turns. Andre made a Garruk and used its ability to accelerate out a Siege-Gang Commander. The board looked like this: Andre had Siege-Gang Commander, three Goblin tokens, Garruk on three counters, and Wall of Roots on two to Kenji's double Treetop Village, Wren's Run Vanquisher, and 2 Llanowar Elves. After considering the state of things, Tsumura opted to attack with his Vanquisher. Andre opted to block with a Goblin token but before damage Kenji played Eyeblight's Ending targeting Siege-Gang Commander.

That forced Andre to take a moment to think. Faced with the option of sacrificing the Goblin to the Commander or making a play with cards the audience couldn't see, Andre opted to use Incinerate to kill the 3/3. That meant his token didn't die in combat and Kenji had fallen behind on the board. With the turn back, the German player powered Garruk up to four counters, threatening a powerful Overrun the following turn with his multitude of tokens. Kenji had the solution, however, playing a Garruk of his own, killing both. When Andre shipped the turn back to him he revealed another trump: a second Garruk eliciting a pursed lip from Müller and putting the Japanese player right back into things. He opted to make a 3/3 with the –1 ability, using friend Richie Hoaen's pro player card to represent the creature.

Andre wasn't out of it just yet, however, as he made a second Garruk of his own to destroy Kenji's. That left the Japanese superstar with a Llanowar Elf and three Treetop Villages, though he only had three other lands to activate them with. Müller had two Wall of Roots, one with three counters and one with none, and two Goblin tokens, but things didn't stay that way for long. Kenji played a Profane Command with an X of 5 to destroy the biggest Wall of Roots and return his Wren's Run Vanquisher to play. The game was certainly spinning out of control for the German, and an attack by his opponent left the life totals at 14–7 in Andre's favor, still ahead on life but behind on the board. An Incinerate dealt with one of the creature-lands, but Kenji didn't back down and attacked with Vanquisher, Llanowar Elves, and double Treetop Village the following turn. Andre blocked the 1/1 but when the top of his library revealed no help, he quickly scooped for Game 2. 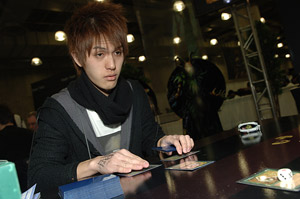 Kenji Tsumura and his Elf back-up calmly take it home.Andre quickly kept his opening hand for Game 2 and led with Karplusan Forest into Search for Tomorrows suspended. Kenji played Gilt-Leaf Palace but opted to leave it tapped, and on his second turn Andre ran out a Tarmogoyf despite no cards being in either player's graveyard. Tsumura quickly changed that with a Thoughtseize for his turn-two play, opting to take a Fertile Ground from the German's hand. While certainly a powerful choice to remove as an option for his opponent, "enchantment" is one of the harder card types to get into the graveyard and it was surely going to be relevant throughout the course of the game.

On his third turn Kenji opted to play a card few might have expected to see at the World Championships: Civic Wayfinder.

The bear was significant enough to soak up an Incinerate from Müller, who had missed his fourth land drop. A Tsumura-Tarmogoyf blocked Müller's but Andre had the trump in Incinerate to KO his opponent's threat, though the German fell further behind by missing a land drop. Kenji, on the other hand, had two Treetop Villages and managed a second Tarmogoyf on his turn. Andre kept his own 'Goyf back before shipping the turn, hoping to soak up some damage. It wasn't to be, as Kenji had just enough mana to activate both Treetops and attack with the two 3/3s and his Tarmogoyf, Slaughter Pacting his opponent's sole creature before blockers were declared.

Facing lethal damage Andre opted to concede on his own turn, though he had the opportunity to pass and see if his Japanese opponent might forget to pay for the Slaughter Pact. When asked if he had considered that play Müller responded, "Wait for him to miss paying for Pact? No, he put the die on top of his deck."