Round 3: Steve O'Mahoney-Schwartz vs. Mike Turian 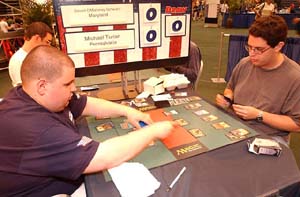 Mike Turian has been playing blue-green Opposition decks on Magic Online ever since Torment came out four months ago. His deck has become more and more popular over the past months and picked up a red splash. Three turns into his round 3 feature match he looked over at Steve O'Mahoney-Schwartz, laughed, and asked "Your playing my deck?" OMS just smiled. Turian's eyes looked positively gleeful, "You're playing my deck!" He then adopted a mock-serious tone and chastised his opponent, "You really shouldn't copy people ... It's not nice." OMS replied in kind "Yep ... I'm a big loser." Turian admitted he liked the sound of that and this sort of playful banter continued until they got to the crucial turns on game 1.

Both players used their red cards early and a steady stream of Birds and Looters headed to their graveyards. Each flashed back a Deep Analysis and got a Squirrel Nest running. Turian drew and played Opposition, but OMS was up a pair of Mongrels so he was able to keep sneaking squirrel tokens through for single points of damage. Turian's deck delivered up a Call of the Herd that looked like it would allow him to stabilize, but then OMS drew an Opposition of his own and the game was all complicated and stuff. Turian played a second Nest in an effort to win the tapping war, but OMS responded with a second Nest of his own. With both players pumping out the same number of creatures each turn, OMS was able to turn his slight life total and creature advantages into a game win. 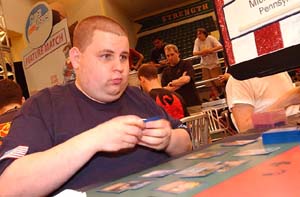 Between rounds Turian cursed his painlands and asked if Finkel was also playing his deck? (Yes.) "You know what the name of the deck is?" OMS didn't. "Schlomo's Pickup Truck." OMS laughed. "I'm actually only telling you because I'm hoping Randy will put the name in the coverage again ... Who draws Opposition followed by Squirrel Nest anyway?!" "What can I say? I'm a very lucky man." OMS is also a man in need of a Worlds invite and he seems to want one fairly badly.

Merfolk Looter is probably the most important card in this mirror match and each player drew three of them in game 2. Unfortunately for the deck's creator, OMS also drew an early Fire/Ice while Turian's only removal was a Flametongue. As good as Flametongue 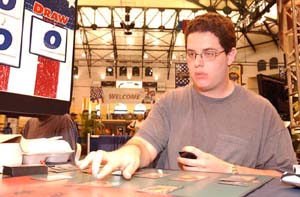 is, it's pretty slow about killing Looters and not nearly as effective as Fire. OMS dug deep into his library and came up with two Circular Logics, a Mongrel, and then a Flametongue of his own. Turian wound up with no creatures in play, but he was able to resolve an Opposition followed by a Static Orb. That combo doesn't do a whole lot when you don't have any creatures. It does even less when your opponent can loot up a a copy of Ice whenever he wants an unfettered untap step. Turian's last chance was to resolve Upheaval, but OMS had the Gainsay he needed to stop that. Soon, his own Opposition was in play and soon after that Turian was dead.