Grand Prix Salt Lake City 2012 winner Shahar Shenhar was looking to establish a fast clock with his White-Blue-Red Delver of Secrets deck, disrupting his opponent's plan while the clock ticks.

William Jensen, who missed making it into the Hall of Fame this year by the narrowest of margins, was on a different plan entirely. His Blue-Red Storm deck aims to achieve a critical mass of spells as fast as possible, generally ignoring any of that silly "interaction" nonsense. 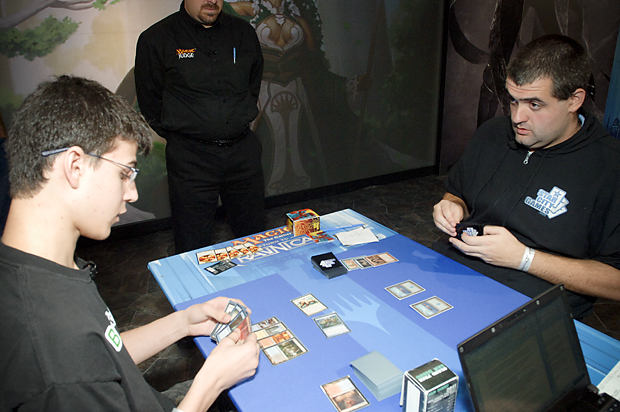 William Jensen is hoping to blow past the disruption of Shahar Shenhar's Delver deck for a speedy victory.

Shenhar came screaming out of the gates with a Steppe Lynx and a Delver of Secrets, attacking William Jensen for 4 on his second turn, before passing back the turn and cutting to the chase with a "Going off?"

"Hopefully," Jensen replied, paying two life to cast Gitaxian Probe, and then Grapeshot'ing Shenhar's team. Shenhar rebuilt his offense with a Geist of Saint Traft, now at 14 from his own lands, while Jensen was at 12 from a combination of paying life instead of mana for his spells and lands, and one feisty cat (now deceased). 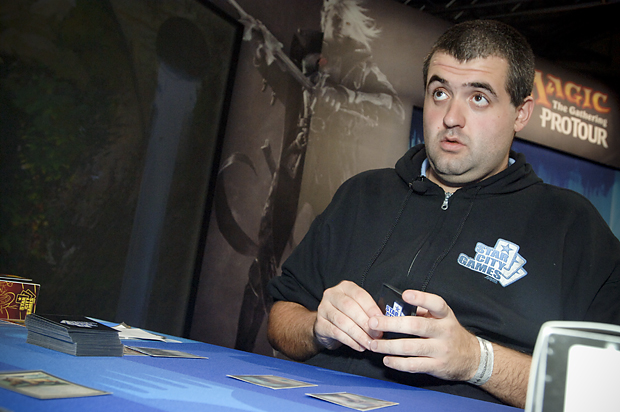 Buying time is the name of Jensen's game.

Jensen took some damage of his own, fetching a Steam Vents with a Scalding Tarn and falling to 9. He then cast Sleight of Hand and a Goblin Electromancer. Shenhar attacked with his Geist, an Eiganjo Castle ready to protect it. Jensen declined to block, falling to 3 life. During Jensen's upkeep, Shenhar Path to Exile'd the Goblin to keep him from getting any use out of his extra land.

Jensen cast a Manamorphose, then a Pyretic Ritual, and a Desperate Ritual. Each time, he cast his spell waiting patiently to see if Shenhar wanted to do anything with the two mana he was holding open. Jensen used the mana to cast Past in Flames, and again, Shenhar allowed it. Jensen fanned out his graveyard. Assuming Shenhar was bluffing a counter with his mana, Jensen would have no difficulty using his two remaining untapped lands to re-cast the rituals in his graveyard, and then the Grapeshot beneath them. But first, he had to see what Shenhar was holding. He fell to 1 life to again pay the Phyrexian price on a Gitaxian Probe.

"Sure," Shenhar shrugged, revealing a Mana Leak nestled between two other cards.

"Yep," Jensen admitted, swiping up his cards. The Storm count was currently six. Grapeshot wasn't winning Jensen the game without the rest of the Rituals resolving first, and the Mana Leak would be enough to bring Jensen's engine grinding to a halt before it could finish.

Jensen began game 2 with some Sleight of Hand, while Shenhar just played a Steam Vents untapped. Jensen then Gitaxian Probed Shenhar the slow way, but passed back his third turn without a third land. Shenhar's turn two Steppe Lynx jumped into action, a Scalding Tarn fetching a Sacred Foundry, dropping Shenhar to 13 life, as he attacked Jensen to 16. 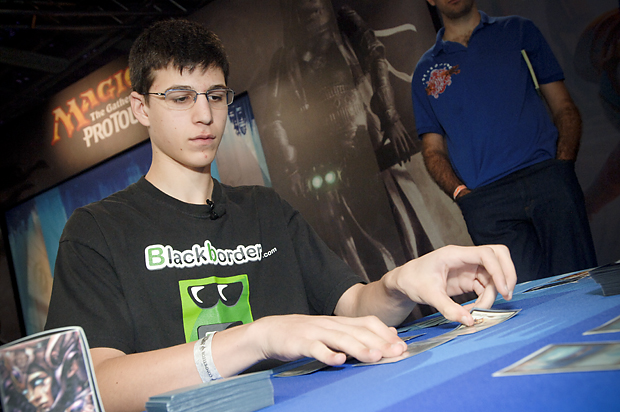 Jensen again failed to find a land, and Shenhar flashed a Vendilion Clique into play. A few turns later, and Jensen was again packing up his cards.

"I think if I had had drawn a Red mana, I could have killed you turn two, but I didn't," Jensen shrugged.

"Is this matchup good for you?" Shenhar asked.

"No, Aggro Control is the worst matchup for our deck," Jensen admitted, signing the result slip.