Round 3: Tadayoshi Komiya vs. Masahiko Morita 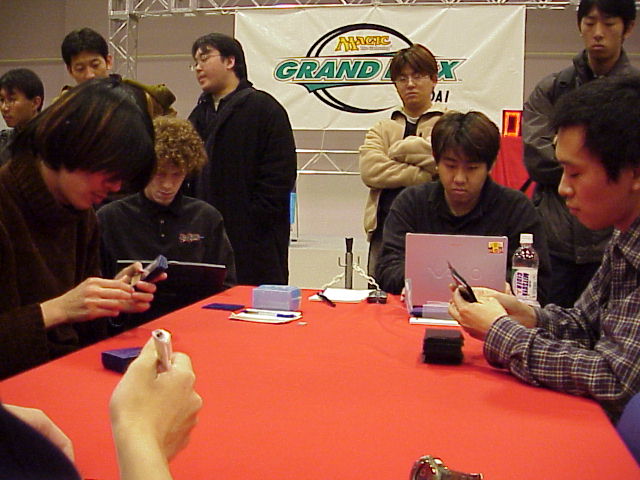 A Duress from Morita forced Komiya to think hard. He eventually chose to protect his hand with Force of Will, removing Brainstorm from the game. Two turns later he had Intuitioned for three Accumulated Knowledges.

Morita had pulled Birds of Paradise to put an end to any mana worries, and now sat on a board of Birds and Yavimaya Elder. Two Rancors hit the board successfully, but Komiya had the fourth Knowledge waiting in his hand. He found Wrath of God to slow Morita down.

Morita wasn't content to wait. He had a second Treetop Village and another Bird to accept the twin Rancors. Facing a quick clock, Komiya dropped the bomb: Holistic Wisdom. Now his Wasteland could be recycled to wipe out both villages, and then he would just ride Knowledges to victory. 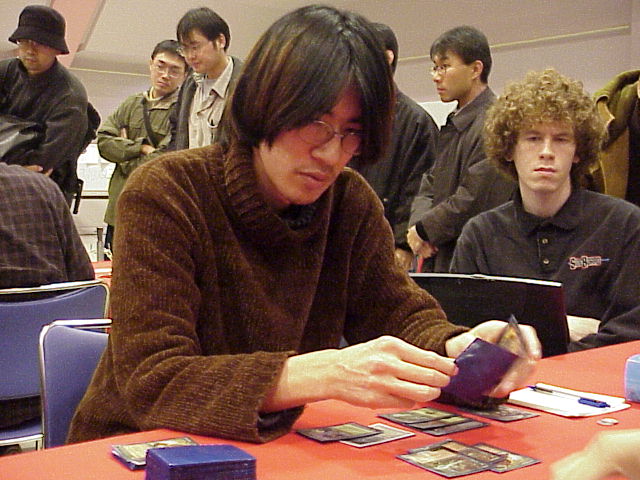 Morita tapped out to swing for the fences. Wasteland axed a village. Komiya brought it back. The Bird attacked alone, leaving Komiya at two. He went to one to Force of Will the Pernicious Deed that would stop his fun. Morita tried to keep the pressure up for a couple of turns, but the Wisdom had Komiya in full control. Morita scooped to have time for two more.

He had better luck in Game 2. Starting with Llanowar Elf and Spike Feeder, he dropped Dust Bowl on his third turn opposite Komiya's Adarkar Wastes and Tundra. He sacrificed a forest to off the Tundra. Komiya played a Knowledge in response.

Lucky for him he had Wasteland in hand. He destroyed the Bowl, and tried to mana-screw Morita with a Plow on his Elf, but Morita had more lands in hand. Komiya got out of his predicament with a second Knowledge that found him lands. However, by the time he had three in play, he was at ten and facing an attack for seven. He played his third Knowledge, but it turned up no Plows. He untapped and Brainstormed, then packed up his cards. 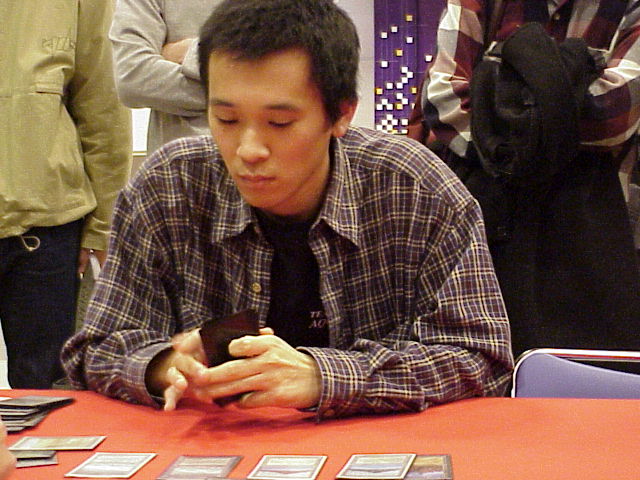 It came down to Game 3. Morita Duressed early, only to see Komiya hide the goods with Brainstorm. He took a second Brainstorm from Komiya, hoping to keep him off search that could stop his Dust Bowl. The Bowl ate a land, but Komiya Intuitioned in response, getting the fourth Knowledge. That, in turn, got him Wasteland.

Morita pressed with Phyrexian Negator, and Komiya was forced to lose an Intuition to Force of Will it. Gaea's Blessing topped his deck up with Knowledges, and served up his third land. Unfortunately for him, Morita had found another Dust Bowl.

For six turns the two players topdecked lands. That was not a race Komiya could win. Eventually Morita played Spiritmonger, and Komiya did not grab a white source in the two turns he had to live.