Round 3: Taking Back Sunday Smashery: Gadiel Szleifer vs. Lucas Glavin

Back Sunday is not your father's Magic team. TBS - their name is taken from the band of the same name -- first came to light in the days leading up to Pro Tour-Philadelphia via a feud with the other American team, TOGIT. When Gadiel Szleifer won Pro Tour-Philadelphia by defeating Japan's Kenji Tsumura, the team lived up to its name. 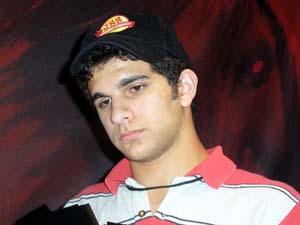 Gadiel hopes to take back another Sunday.

Still, they are not as rigid or as organized as the teams that have come before them. Rather than searching for a unified team deck, they seem to use their mailing list - which originally started as a MTGO clan - to test their decks out against each other and refine their own lists. It is more of democratic idea exchange than the traditionally hierarchal team structure where an alpha male leads the pack.

Two of the members of the TBS were facing off in round two, with Szleifer paired off against Lucas Glavin. You may remember Lucas' name from the finals of Grand Prix-Boston. Aside from that and winning the last Neutral Ground/YMG Grudge Match, Lucas has not made much of a name for himself but he is an excellent player who has demonstrated all the requisite skills to become one of the game's top players.

Lucas is the first player I can ever recall who graduated from the ranks of the digital world into IRL Magic. During the Grudge Match finals I was very impressed with the flawless technical play that Glavin displayed - even going so far as to point out play errors his opponent was making and allowing him to take them back.

Lucas' deck of choice for this tournament was Green-black Cloud. A number of players on the mailing list considered the deck, including Szleifer, but Glavin was the only one to go down that road. Szleifer opted to play White Weenie - a surprisingly popular deck this weekend.

This was a frustrating game for the followers of Plow Under. Lucas' deck resolved a pair of Plow Unders on turns four and six - with a Witness in between - and still lost the game. Gadiel had a second-turn Leonin Skyhunter. When the second Plow Under put him at zero lands, he floated two mana and made a pair of dorks with Raise the Alarm. Two turns later he resolved a second Skyhunter and the two fliers went all the way.

Gadiel mulliganed into Suntail Hawk and followed it up with Umezawa's Jitte. Lucas used Echoing Decay on the Hawk and was able to play Kodama's Reach for more land without having to take time out to use the Viridian Shaman just yet. 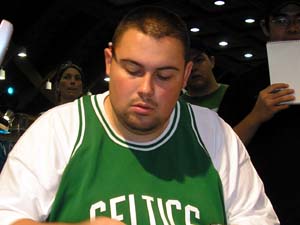 Gadiel made an Auriok Champion and Lucas untapped to play the Viridian Shaman and an Elder. Gadiel took advantage of a pants-down opponent and played Hokori, Dust Drinker. Lucas shrugged and suppressed a little laugh.

He could not do anything on his turn but untap and play a land. A turn later his Eternal Witness fetched him back Echoing Decay. Finally Lucas could not suppress his chuckle any longer and pointed to the Champion and shook his head as Gadiel failed to gain life from the Champion.

"He's actually 1 for 5," came a whisper into my ear from some onlookers.

After failing to kill Hokori in combat and making Gadiel burn a Shining Shoal, Glavin used the Echoing Decay and untapped to cast Kokusho, the Evening Star.

Gadiel tried to mount an army to swarm the dragon and get in enough damage but that involved not chump blocking. When he let the dragon and another two-power creature go by without interference Glavin finished him off with Death Cloud.

"I have to not block there and hope you have nothing. If you have absolutely nothing I have just enough," Gadiel explained after the game.

Gadiel led off the rubber game with a Suntail Hawk but missed his next two land drops. Lucas did nothing but develop his mana during that time with the usual suspects. Gadiel made a second mana off of Chrome Mox and played the Skyhunter than had languished in his hand for the past few turns.

Glavin's Shaman sat on the Mox. Gadiel winced as he put another Skyhunter into play.

"I guess I will get rocked if you have it," sighed Szleifer as he stared forlornly at the pair of Glorious Anthems, still a top-decked land away, in his hand.

Eternal Witness ripped off its disguise and revealed itself to be Ink-Eyes - though there was nothing in the bin to reanimate. Hideous Laughter cleared the board.

Suntail Hawk was assigned to chump-blocking duty but Glavin got a tad greedy on his next turn. He returned the Hideous Laughter and cleared the path for his ninja to reanimate some white weenie but Gadiel suddenly saw a way back into the game.

Gadiel redirected the three points of damage back onto the ninja with Shining Shoal - Glavin had tapped all of his black and could not regenerate. It did not really matter though, as Lucas had another Eternal Witness in hand and returned the servant of the Oni for next turn.

From there it was a series of chump blocks for Gadiel until he conceded in the face of Kokushu.

Gadiel was exasperated with his poor draw but defended the one land hand. "Glorious Anthem is so good against that deck. It's the most important card and I had two of them. I think I had to keep it."

The win boosted Glavin's record to 2-1 while dropping the Pro Tour-Philadelphia winner in the middle of a 1-2 draft table.