Round 3: Time to Kill

Gabriel Nassif has perhaps the greatest Magic resume of any player not currently in the Hall of Fame. It’s not that voters spurned the eight-time Pro Tour Top 8 member, it’s that they haven’t been allowed to vote for him yet because he’s not eligible until 2010! Normally we would see him piloting a Pat Chapin creation, but Nassif is certainly not playing the same Reveillark deck that Chapin is currently piloting, choosing instead to go to war with black-red Goblins.

Sitting across from Nassif is 2007 Rookie of the Year Yuuya Watanabe. According to Rich Hagon, Watanabe’s stated goal at the beginning of this year was Player of the Year—the next logical step up, I suppose. Watanabe’s deck is a spicy white-blue Reveillark deck designed to cause major problems for aggressive decks just like Nassif’s, provided he can get through the early game and bring his engine online.

Both players kept their opening hands, with Nassif playing a Knucklebone Witch on turn one, while Watanabe matched with an Island. Shadow Guildmage from Nassif gave him two miniature beaters, as Watanabe continued to build his mana base with a Plains and then Mind Stone. Meanwhile, Nassif was using Pendelhaven to increase his clock, tossing a casual Mogg Fanatic down to join his other 1/1s. Venser, Shaper Savant flashed in during Nassif’s next attack, bouncing a land and killing the Guildmage, while Nassif grimaced at what was a clear mistake on his part.

Mulldrifter on Watanabe’s turn gave him a clear edge in board presence and cards with the life totals 17–12 in favor of Nassif. The Frenchman shipped Mogg Fanatic into the zone, and Watanabe chose to trade Venser with the little Goblin, clearly happy with how things were going. On Nassif’s next attack step, he called over a judge to clarify the interaction between Pendelhaven and Marsh Flitter. Does the faerie become a 4/5 when pumped by both, or merely a 3/3? The answer was 3/3, and the Flitter took down the Mulldrifter via a sacrificial Goblin. Watanabe was nonplussed by this, throwing down Venser and a Reveillark on the next two turns and slapping Siege-Gang Commander away with Pact of Negation.

The noose around Nassif’s neck continued to tighten as Kitchen Finks made their first appearance of the match, but a second Flitter and a suspended Greater Gargadon at least gave him a chance, however narrow. Unfortunately, there was just no way Nassif could keep up with Watanabe’s card advantage engine. Momentary Blink on Reveillark popped two Mulldrifters into play along with four cards, flashback let him do it again, and eventually Watanabe did enough damage to seal the deal. Nassif let Yuuya go through the motions just to gain a greater understanding of what he would be facing in Games 2 and 3. 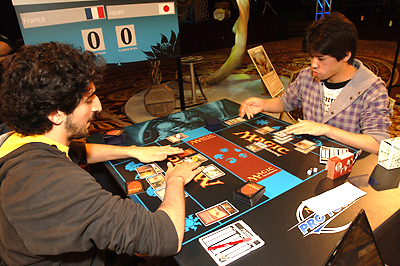 Gabriel Nassif commands a gang of goblins, while Yuuya Watanabe goes off on a Lark.Nassif opened a one-lander for Game 2 and immediately pitched it back, knowing he needed more than luck to have a chance. Watanabe saw all mana sources in his hand and also pitched it back, bringing the total shuffling time between Games 1 and 2 to around 7 minutes, no foolin’. Play finally started, and Nassif used Thoughtseize to get rid of Kitchen Finks. Mogg War Marshal and Greater Gargadon put Nassif in a better position than last game, but Watanabe was busy building his mana base so that he could handle whatever might be thrown his way. Venser flashed to the board at the end of Nassif’s fourth turn, while Watanabe evoked a Mulldrifter to find his fifth mana source and Nassif completely stalled on action.

Earwig Squad from Nassif let him get rid of Watanabe’s sideboard two Crovax, Ascendant Heros (Crovaxes? Crovaxen? Crovaxi?) and a Momentary Blink, but Sower of Temptation forced Nassif to sacrifice the Squad in order to keep them out of enemy hands. Murderous Redcap popped the Sower right back, and what looked like another blowout from Watanabe suddenly became very interesting... right up until Watanabe evoked Reveillark, bringing back the Sower of Temptation and Mulldrifter. Siege-Gang Commander on Nassif’s side gave him a puncher’s chance, but Kitchen Finks really seemed to end things unless Nassif had some super-secret tricks up his sleeve.

This time it was Watanabe’s turn to stall, as he flooded on land despite a Careful Consideration. Meanwhile Nassif was building a small Goblin army, with Knuckbone Witch and Mogg War Marshal to go along with his Redcap, the entire Seige-Gang, and a Greater Gargadon with a single counter quietly waiting in the wings. Remove Soul made certain big Gargs didn’t resolve, but a Goblin ping and another Redcap got rid of the Finks, clearing the way for the little Knucklebone Witch (now a 5/5) to go to work. Venser returned the Witch to Nassif’s hand, and now a pair of Wispmares acted as damage sponges for any attacking Nassif wanted to do. Another Siege-Gang Commander forced Watanabe to send Reveillark back to his own hand with Venser, Shaper Savant. He brought back 2 Sower of Temptation to steal Nassif’s Commanders, but killing the Faerie Wizards with the effect on the stack solved that problem.

Now it was time for Watanabe to dig for answers, cycling through Ponder, Mulldrifter, and another Careful Consideration, while still putting up enough interference to keep Nassif far away from his life total. Goblins, however, are like Doritos—crunch all Watanabe wanted, and Nassif continued to generate more. The Japanese player actually got a good laugh at the Marsh Flitter, holding his head in his hands and wondering how he was going to get out of this. Every time it looked like he could put the game away, there was another answer from Nassif. However, one turn later Yuuya hit his third Reveillark and then Blinked it to bring two Sowers back into play, both targetting Nassif’s last Commander. Only one lived for its ability to resolve, and it only for a turn, as a Redcap took one for the team to bring the most troublesome Goblin back to its home turf in what was turning out to be an epic game.

Gab finally put a Loxodon Warhammer on the board and attacked with his Flitter as time was called in the round, killing two of Watanabe’s Wispmares at the cost of the Marsh Flitter and a persistant Redcap. Remove Soul the next turn on Nassif’s Gargadon took all the wind out of Gab’s sails, and he could not kill Watanbe before the final turn, allowing the Rookie of the Year to win the match 1-0.

After the match, Nassif was lamenting his own pace of play, saying that he clearly was going to win Game 2 (Watanabe was nearly out of cards in his deck), but he simply didn’t leave himself enough time to do so. Meanwhile, Watanabe fought tooth and nail to pull that one out, needing every ounce of resistance his deck could provide to keep from losing Game 2 before the end of the round.