Round 3: Tobey Tamber vs. Andy Chang 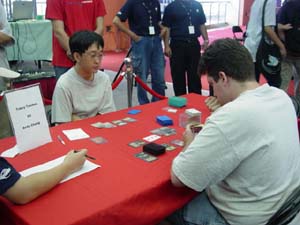 Tobey Tamber is a fixture of Taiwanese Magic. The expatriate U.S. Player-turned-English-teacher has been living the high life at Asian events, taking the title at GP Kaohsiung last year. He and his opponent, Andy Chang have a friendly rivalry extending back to the days of Rising Waters in Masques Block Constructed.

Tamber, playing second, mulliganed into some goodies. He started with Basking Rootwalla, then matched Chang's Mongrel. Chang swung in successfully for two, then Firebolted Tamber's Rootwalla and made a Blurred Mongoose. Tamber answered with Call of the Herd.

Chang held back, and Tamber rushed him. When the dust settled, Tamber had let his Mongrel die, taking out the Mongoose. Chang took four to fall to thirteen. The Call was flashed back. Lucky for Chang he had one of his own. Again Tamber hit, losing his Elephants and dropping Chang to ten. Tamber was fast running out of gas. He made a Grim Lavamancer. 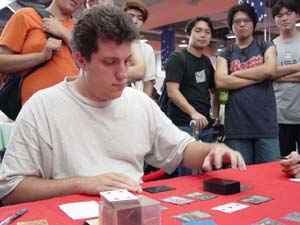 Chang flashed back his Call. Tamber held his ground. A fifth land let Chang take out the Lavamancer, and it brought him to eight. It looked like Chang was turning the tide. He hit for two with the Mongrel. Tamber tried to end it with a Flametongue Kavu, pushing through still more damage from the Rootwalla. But Chang had a Flametongue of his own. After trades in combat, Chang's Elephant ruled the board. While Tamber drew land, Chang drew Anurid Brushhopper, taking the game with ease.

Both players opened with Birds, but while Tamber got his Call on, Chang shut it down with Anurid Brushhopper. Tamber wasn't worried. He'd invested heavily in Flametongue Kavus. The first forced the discard of Llanowar Elves and Reprisal. Chang had one of his own to take it down. Tamber had a second, and the Brushhopper hit the graveyard. 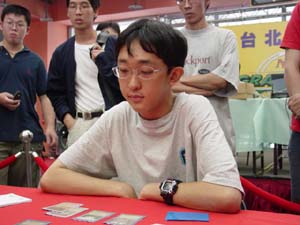 He pulled a Call of the Herd off the top, but it left him cardless. The Firebolt in Chang's 'yard took out the Mongrel. Again Tamber topdecked, this time Flametongue Kavu to push through three more damage. Another Firebolt took down the 4/2. And the waiting proved to benefit Chang, who threw down Worship. Tamber was caught off-guard. He'd forgotten to board in his Hull Breaches.

For many turns they cluttered the board. Chang seemed to hit a glut of Call of the Herds, giving him plenty of creatures in play. Tamber was sitting behind a hand of Rootwallas and Fiery Tempers, hoping Chang would slip up. Chang had no problem playing the long road. Tamber was undamaged, however, so burning him out seemed unlikely. Tamber secured himself a wall of Shivan Wurms. Finally, Chang drew Glory, and his pro-green army swung for the win. Tamber had no Fog.