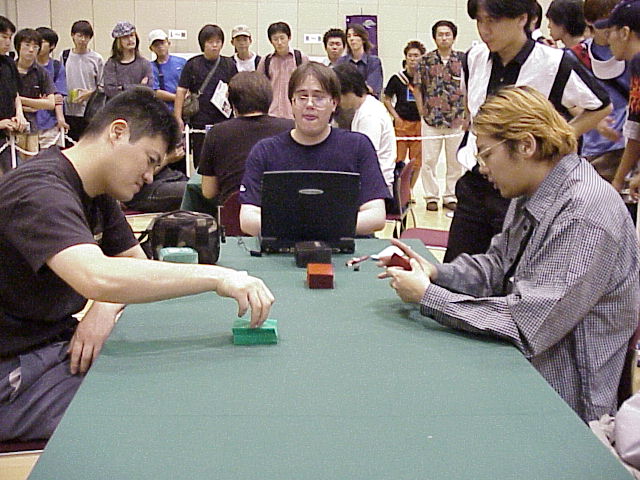 Tsuyoshi Douyama, Osaka native and veteran of 8 pro tours, is no stranger to the feature match tables. However, this is the first feature match for his playtesting friend and fellow Osakan, Hakaru Nagao. Both of them are using the same counter/burn deck with Shivan Zombies and Nightscape Familiars. Nagao is also sporting Vodalian Zombies, while Douyama instead includes Pyre Zombie. Both men also bring Undermines, Terminates, Urza's Rage, Fire/Ice, and Rushing River to provide permanent control. The packed audience was impressed with the blinding shimmer of Douyama's thick, double-sleeved all-foil deck.

The atmosphere started off very jovially, as their watching teammates groaned at the two friends' face-off. Japan's best comedians come from Osaka, and the team's catcalls and retorts represented true Osaka heritage. After winning the roll, Douyama's face screwed up with disappointment as Nagao mulliganed not once, but twice. Nagao took the double mulligan stoically, but Douyama's aggravation at not facing a proper challenge was clear for the large crowd to hear. Nagao shrugged; he was going to do his best.

Douyama led with a Nightscape Familiar, and the game ground down to a land playing heat. Finally missing a land drop on turn 6, Douyama tried to bring out a Shivan Zombie, but its flesh was consumed by Nagao's Fire. The excitement died down and the Familiar brought Douyama down to 15. Finally Nagao stopped the death of a thousand cuts by playing, and keeping, a Shivan Zombie.

Nagao then decided to start sending the red Zombie towards his opponent, hoping to cut Douyama's mana supply by 2 per turn. Douyama brought out a second Nightscape Familiar. Deciding to take a risk, Nagao attempted to use Fire to destroy both Familiars and clear the way for his Shivan Zombie. Douyama could choose to save the Zombies or tap out. The veteran chose to it safe and escorted the Familiars to their final rest. However, with only a single Urza's Rage and 3 lands in hand, Nagao lacked any way to capitalize on the opportunity. 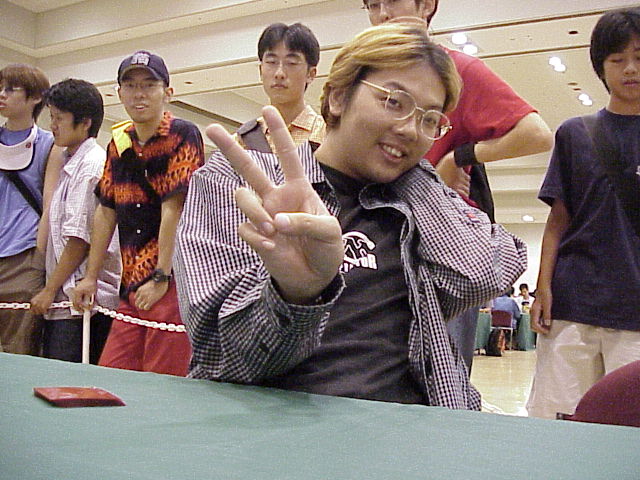 A following Lobotomy prompted Nagao to preserve his deck's Urza's rage by punishing Douyama down to a lowly 15. Douyama continued to cultivate a full hand and Void away Nagao's Shivan. Nagao's desperation Fact or Fiction met an Undermine, and Douyama's Rage and Prophetic Bolt finished the counter-burn war in an atypical 10 minutes.

The Osaka joking gave way to dead silence as the two mulled over their sideboards. Nagao added 3 Urborg Shamblers and 2 Disrupts. Douyama added a slew of Gainsays, Terminates, and Excludes. Anticipating lots of creatures in the next round and heading Nagao off at the pass appeared to be Douyama's strategy.

Kicking off in Game 2, Nagao avoided the dreaded mulligan and started to bring the noise with a Vodalian Zombie that met its match in Douyama's Nightscape Familiar. The battle of the undead was set to slow motion, however. Douyama cast Fact or Fiction; Nagao responded by slapping down his own in response. This may have been a poor play on Nagao's part; he could have waited for Douyama's Fact or Fiction to resolve so that he could use the knowledge of Douyama's piles to better select his own.

Nagao was offered yet another Fact Or Fiction coupled with an Undermine or a Fire/Ice, bundled with a pair of Shivan Reefs. Following the conventional wisdom in control versus control matchups, where one always wants to have a greater amount of mana, Nagao took the Fire/Ice and land pile. Douyama's Fact or Fiction gave him a Swamp, Undermine and Lobotomy, discarding a second Fact or Fiction and Salt Marsh. 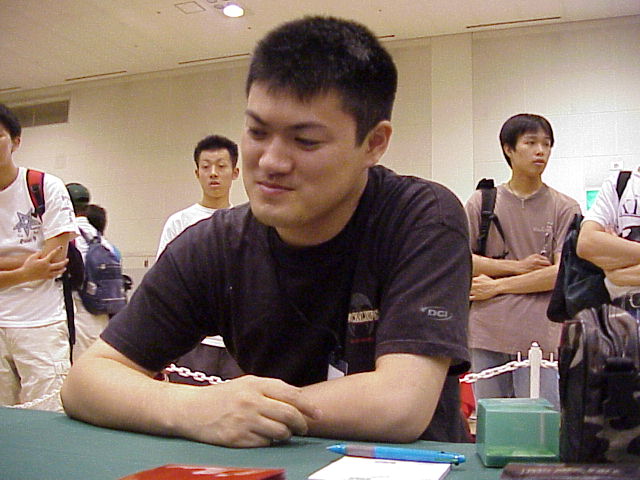 The next turn, Nagao winced as Douyama plucked Undermine from his hand with Lobotomy, adding injury to insult by removing 3 precious counters from the deck. Nagao's situation looked grim. However, he finally drew into his threats and got a Shivan Zombie to go with his Vodalian. With 11 land on the table, Nagao could still pull out a win if he topdecked Rage. However, the Rage never materialized as Douyama revealed a backbreaking five cards with Fact or Fiction. Any which way Nagao tried to slice Lobotomy, Urza's Rage, Void, Gainsay, and Shivan Reef, he would be left with a bitter sandwich.

Douyama followed up with a Void for 2, and Nagao Iced one of his two left untapped lands. Not wanting to see Nagao topdeck a Rage, Nagao met Ice with a Gainsay, depriving him of a needed card. Nagao's face fell further as his teammate played a Pyre Zombie. Nagao then topdecked his second Fact or Fiction. Surprisingly, Douyama gave his assent. The piles offered to Nagao were Fire/Ice, Swamp, and Salt Marsh or Urborg Shambler and Urborg volcano. Nagao decided he wanted to use the Ice to draw a card instead of using Urborg Shambler to end the Pyre Zombie threat. Douyama's Undermine was the final nail in the coffin as the Pyre Zombie and Rage finished the job.