he third round threw together two of the biggest names in Magic: Patrick "The Innovator" Chapin and Jon "Jon Finkel" Finkel, a man who had never needed much more of a nickname than his own name. Both players had managed to lose one of their first two rounds, and that gave this feature match some added bite. A 2-1 record would set the winner up for a run towards an excellent 4-1 record in the first day of Modern competition, while the loser would be heading towards the wrong end of the standings table.

As they took their seats under the heat of the lights, Pat Chapin was his usual jittery self, while Finkel carried himself with a deliberate and unhurried pace—he would not be rushed. Chapin was packing the Splinter Twin combo deck, while Jon Finkel was also in blue-red with the Pyromancer Ascension combo at his command.

Chapin lost the dice roll but was still able to make the first play, stealing in with a Gemstone Caverns, pitching a Firespout to get the head start on mana. Finkel dug up a set of Steam Vents with his Scalding Tarn, and a Gitaxian Probe gave him his first look at the Innovator's hand: three land, Splinter Twin, Deceiver Exarch, and Preordain. Chapin played a Steam Vents of his own on his first actual turn, before Finkel dipped into the tank and stayed there for a while as an increasingly anxious Chapin watched and waited.

It turned out that Finkel had a lot to think about. As he finally emerged from the tank, his deck exploded into life. Casting a Rite of Flame for red mana, Finkel revealed his plan and cast Pyromancer Ascension, then cast a second Rite of Flame to add a counter to the Ascension and generate yet more red mana. A Manamorphose converted the red mana to blue, and that gave Finkel the chance to cast Preordain for the second time in the game. 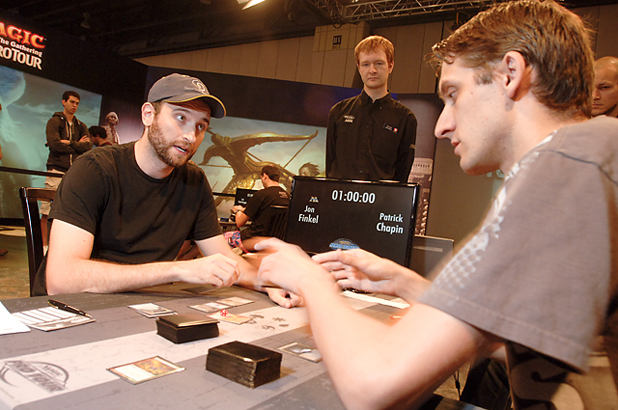 Jon Finkel tells Patrick Chapin what he's in for.

That was the second counter that he needed on Pyromancer Ascension, and things quickly spiralled out of control.

It was only his second turn, and Finkel's deck had flooded the board with twenty-four 1/1 Goblin tokens. Chapin untapped, drew a card... and picked up his permanents.

"That might be a record," Chapin joked. "I think I had priority for about seven seconds in that game."

On the comeback trail, Pat Chapin began to busily upgrade his hand at the start of the second game, a Ponder and a pair of Preordain digging The Innovator through his top few cards. Finkel returned the favour with his own Ponder and Preordain before sneaking a look at Chapin's hand with a Gitaxian Probe. The Probe revealed that Chapin had a Pestermite and a pair of Mystical Teachings in hand, along with a Dispel, but there was no sign of the Splinter Twin or Kiki-Jiki half of his combo.

Seeing that the way was clear, Finkel cast a Pyromancer Ascension on his third turn, but good fortune was on the Innovator's side, as he had drawn a Logic Knot. Exiling his graveyard, Chapin countered the lethal Ascension.

The game turned on that play. For a miserable few turns Jon Finkel could only sit and count his two lands, despite a Ponder and Gitaxian Probe, while Chapin powered onwards. Finally seeking a way out of his mana problems, Finkel cast a well-named Desperate Ritual, but Chapin was ready and waiting. A Pestermite entered the battlefield while Finkel was tapped out, and the Faerie untapped an Island so Chapin could Negate the Desperate Ritual. 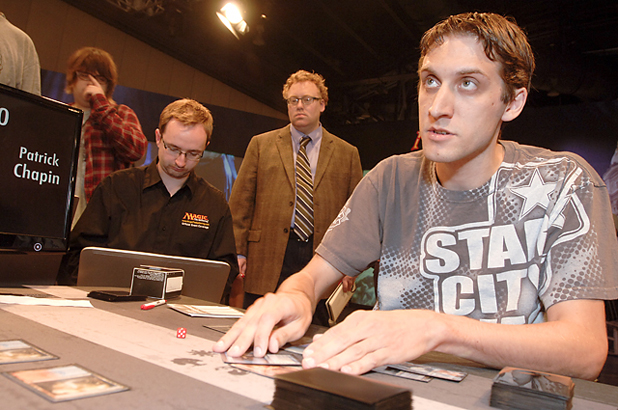 Untapping for his own turn, Chapin placed a Splinter Twin onto his Pestermite. That was step one. Step two was to spawn a thousand duplicates of his Faerie, all of which had haste, and step three was to level the match in a single Faerie onslaught!

The deciding game began with a familiar dance of blue cantrips, and the inevitable Gitaxian Probe from Finkel. Scouting out Chapin's hand, the Hall of Famer was faced by a trio of countermagic that he had to get past—Remand, Remand, and Dispel—and the threats of Pestermite and Teferi, Mage of Zhalfir. The pattern of the early game was set, with Finkel having to find some way to draw out Chapin's countermagic before he could really set his plan into motion.

Despite having countermagic in hand, Chapin decided he had better plays he could make and allowed the Pyromancer Ascension to resolve, holding onto his counters to protect his own combo. Finkel added a first counter to his Pyromancer Ascension with Sleight of Hand then passed the turn, and Chapin took the opportunity to cast a Pestermite while his opponent's defenses were down. Chapin nibbled at Finkel's life total with the Pestermite but left his lands open, staying back behind the protective shield of his countermagic.

Untapping his lands, Finkel stepped back to the plate looking to hit another home run. His first play was a third Sleight of Hand, and that gave his Pyromancer Ascension a critical second counter.

...but the parry was blocked by Finkel's Dispel, and both the Rite of Flames resolved, giving Finkel plenty of mana to burn.

...but Chapin could only counter one of Finkel's spells, and the other resolved, switching Finkel's mana back into the critical blue mana he needed. 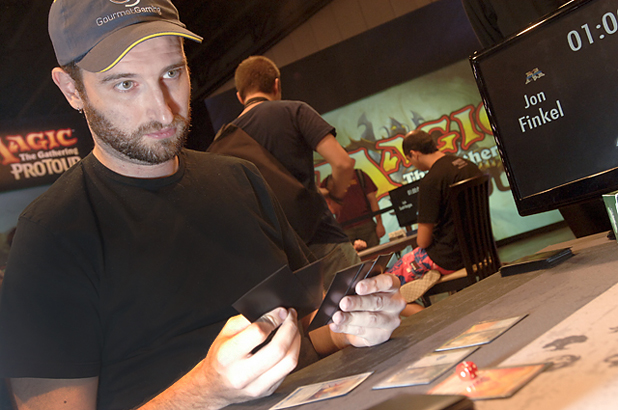 A relentless Finkel takes it home.

Chapin's defences were simply overloaded by the copies that Finkel was producing. Another Rite of Flame produced yet more mana, and it all ended with an explosive Empty the Warrens, producing another twenty-four 1/1 Goblins!

Pat Chapin looked at the table, looked at his hand, drew a card, and offered his hand in congratulations.