Grand Prix – Atlanta's international flavor came to the forefront in round three, when visiting Dutch Star Victor van den Broek squared off against relative unknown Todd Scott. Although van den Broek doesn't have a top finish in his résumé, he's well known as a writer and gamer.

Both players kept their opening hands and Victor led off with Mountain, showing that he was playing some variant of the popular Goblin archetype. A turn two Piledriver confirmed this suspicion, although it still left doubt as to whether this was mono-red Goblins or the Goblin Bidding variant.

Todd played an Elfhame Palace on turn one and followed with several Islands, meaning that the two of the widely played archetypes at the event were represented at the table. All weekend long the talk has been Wake and Goblins, people wondering who had the advantage in the match.

Victor used Burning Wish to get Cabal Therapy, then spent almost no time thinking before he cast the Therapy. "Wrath of God," he guessed. The therapy ripped a single Wrath of God from Todd, and showed a hand very favorable to Victor. With Cunning Wish, Deep Analysis and Mirari in his hand, Todd had no way to stop the onslaught of goblins, and the crunch was on. 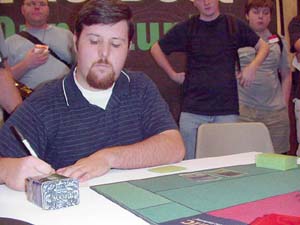 A second Piledriver landed on the table, now safe from the effects of Wrath of God. The two Piledrivers and a Goblin Warchief swung, dealing 12 damage to Todd and nearly bringing Game 1 to a close.

One of Victor's creatures finally hit the graveyard, as he sacrificed it to flash back the Cabal Therapy. Todd paused him, "I have a response," he said. Victor acknowledged the response with something of a knowing smile. Todd did what everyone expected and cast his Cunning Wish. The Wish went into this deck box and a Moment's Peace came out from the sideboard. The Moment's Peace was immediately taken with Cabal Therapy.

The Peace in the yard saved Todd for one turn, as he flashed it back to stay at three life. It didn't matter at all as Victor played a Shock and then a Firebolt to end Game 1.

The two players were nearly silent as they sideboarded and shuffled up for Game 2. Of course, no more noise was needed as Mark Zajdner was playing in what he called his "first Slide mirror" and the play was loud and raucous. Actually, Mark was having serious problems figuring out a timing question and Osyp Lebedowicz was ribbing him mercilessly for his problems. Todd and Victor didn't need to say much to entertain the crowd, Mark was keeping them pretty busy.

Todd led off the second game with Krosan Verge was followed by a turn two Compulsion. Victor got off to another flying start. Turn two Piledriver, turn three Warchief and the beats were on. Todd's life total changed to 15, but his mana base was far more stable in this game, and with Compulsion at the ready he could ensure good draws assuming he lived that long.

A Gempalm Incinerator was recruited into the army of the Netherlands and Victor seemed a little nervous. The possibility of overextending seemed to have him thinking and rethinking each decision. In this matchup he knew he had to kill quickly, before Todd can take control of the board with the powerful Wake enchantment. At the same time though he has to avoid the devastation of Wrath of God. A Wrath of God at this stage would have left him nearly empty-handed. His deliberations finally led to the decision to play Burning Wish, using it to go get Patriarch's Bidding.

"Wrath," Todd said on his turn, dropping the board sweeping spell on the stack. The army of Goblins headed to the yard. If Todd was holding a counter of some kind for the Patriarch's Bidding then this game would come to an early close.

The turn came back to Victor and he played the Patriarch's Bidding. No Mana Leak from Todd, and the army of goblins returned from the graveyard. Todd looked at the table seemingly without worry. A Moment's Peace prevented all the damage the goblins might have done, then during the end step Todd cast Renewed Faith, getting himself back six life. 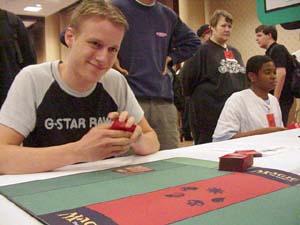 "Wake," he announced on his turn, setting the enchantment on the table. The Wake was followed up with Wrath of God, his second, and Victor had a table devoid of his goblin army.

Two turns later Victor still hadn't seen any creatures, his goblins afraid to come to the top of the deck, for fear of angering the Gods again. With two consecutive land draws Victor was in danger of ending up out of the game.

The danger that ended the game finally showed up in the form of Decree of Justice. Neither player even bothered to count up the Soldier tokens as Victor scooped his lands and conceded Game 2.

Victor would get the opportunity to start Game 3, and that can be all Goblins needs to get a win. He stared at his opening hand, seeming unconvinced that keeping it was the right idea. He did decide to keep, and the game opened with people wondering why. Turns one and two saw mountains hit the table with no creature backup. Finally, on turn three Victor played a Goblin Warchief, and used the power of the Warchief to get both a Sparksmith and a Goblin Sledder into play for turn four.

The start seemed sluggish in comparison to his Game 2 start, and with speed being of the essence he had to be concerned that he might lose another one. Given too much time Todd would take control. Victor played Siege-Gang Commander and swung with his army. The swinging Goblins brought Todd first to 12 life, then all the way down to three. When he still hadn't ripped a Wrath of God or a Moment's Peace he packed up his cards.

"I don't know what to Sideboard in this matchup," Victor commented afterwards. A bystander quickly mentioned that Flaring Pain was the right choice to Sideboard in.

"I got those," Victor mentioned, showing the four Flaring Pain and the single Cabal Therapy that he had boarded in.

Todd mentioned afterwards the one thing he thought was important for Wake to win this matchup. "You have to win the die roll," he offered. "If you don't win the die roll and they get fast starts in games one and three, you lose the match just like this."