specialist and reigning Vintage World Champion Steve Menendian is bouncing in his seat before the beginning of his feature match, a bundle of nervous energy under the Pro Tour lights. Appearing on the Pro Tour for the first time under special disposition after his R&D entry into next week's Invitational, Steve's already enjoying his unexpected Valencia stopover, while Japanese veteran Tsuyoshi Fujita seems to be taking the feature match pressure a little more in stride.

"This is so cool. Win, lose, or draw this is just going to be the coolest. I'm so excited!" Menendian enthuses. "I'm not even supposed to be here today."

Not even supposed to be here today? Isn't there a movie about that?

Winning the dice roll it was all business from Fujita, and he opened with a Polluted Delta into an untapped Watery Grave and a Putrid Imp that sets Steve back a bit. 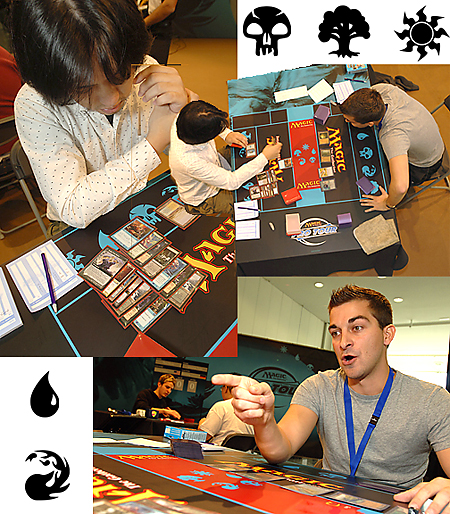 "Ooh, dredge," he exclaimed, before responding on his turn with a Lotus Bloom and a Sulfur Vent. At the end of Steve's turn the Putrid Imp briefly gained flying as Fujita dropped a Golgari Grave Troll into his graveyard. Passing up on his draw, Fujita opted to dredge up six cards. That found him a Narcomoeba, then a Tolarian Winds emptied the whole of the Japanese pro's hand into the graveyard—including two Bridge from Below. Menendian looked a little worried and picked up the whole mass of his opponent's graveyard to rifle through what he could expect to see next turn, but could only conclude, "I'm superdead next turn. Ok, so I'm going to try and go off here..."

That seemed a tough ask for the American, as he still only had the one Sulfur Vent in play. Nonetheless he pulled out a pad and pen and started frantically scribbling on it, working out mana combinations and muttering to himself under his breath in advance of ever playing a single spell. This was his blueprint for the turn, his great escape plan for victory from the Zombie horde—a succession of

And that was Menendian's last involvement in the game, as Tsuyoshi Fujita dredged up his Golgari Grave-Troll for another 6 cards into his graveyard, cast a Careful Study to dredge again, then used a Cephalid Coliseum to dredge even further into his deck. More than halfway through his deck and with multiple Bridge from Belows in the yard, Fujita finally hit the Flame-Kin Zealot that will give his undead army haste and Menendian scooped to save time and get into Game 2.

Shuffling up between rounds, the players chatted briefly about how quick the format is, and how little interaction there is, and Menendian opined that he would have won that first game had he won the dice roll. But he was going first this time, so it was his chance to shine.

Steve drew his seven cards, but before choosing to mulligan or not he stared off into space, grimaced, looked at his hand again, grimaced again, but finally chose to take his hand and opened out with Lotus Bloom and Geothermal Crevice. Fujita began with a Careful Study and ditched those pesky Grave-Trolls and Thugs from Golgari into his graveyard. Back to Steve and he played a Chromatic Star and Tinder Farm, while a hint of a smile played over the lips of the seemingly confident American.

Back to Fujita, who dredged up his Grave-Troll to find two Bridges, then dredged up the Golgari Thug with another Careful Study, but it looked as though had come up short on finding any other cards with dredge, and that cut the potential for an explosive next turn. He discarded an Ichorid along with the Grave-Troll but could only pass the turn back to the grinning Menendian.

Steve was back in, and pulling yet more double duty as his internal monologue leaked out and doubled as match commentary.

"Can you win next turn? I don't think so. Irrigation Ditch. Go"

Fujita dredged his Trolls but Menendian exclaimed with delight that his opponent had forgotten to recur his Ichorid for an attack. Fujita had dredged up more Stinkweed Imps, finally, but there was still no sign of the win. But the dredge deck had a Plan B, and Fujita played a Cabal Therapy from his graveyard hunting for Burning Wish. Steve's hand was empty of Wishes, holding Chrome Mox, Seething Song, Rite of Flame, and Infernal Tutor. Not finished yet, Fujita sacrificed a second Zombie to Cabal Therapy again, but he hit a problem—he had forgotten the English title for the card he wanted to name! After detailing the spell to a judge—it costs

, it searches the library, and it has hellbent, Fujita satisfied the requirements for naming a card. Menendian's precious Infernal Tutor went away.

He'd been Cabal Therapy'd twice, but Steve was still in the game, and the commentary began again as he picked up his turn:

He sacrificed the Chromatic Star to draw a card but didn't see the spell he wanted, and so passed the turn. And it immediately looked like Steve might regret being so talkative and pointing out mistakes as Fujita remembered to bring back the Ichorid. Despite the dredge mechanic it all he could muster, however, and he swung for 5 with that and a lone Zombie.

Back to Menendian, and he was again bouncing in his seat. He drew... he sighed...

"My deck hates me. Your turn."

Fujita dredged again, and by now was running short of cards that WOULDN'T win him the game! Certainly the pair of Dread Returns he revealed would do it, especially alongside a third Bridge from Below. The Ichorids came into play, the Dread Returns replaced them with a bunch of Zombies, and the Flame-Kin Zealot gave the Zombies the haste they needed to end Steve Menendian's stay in the feature match area.