Round 3: Vladimir Komanicky vs. Amiel Tenenbaum 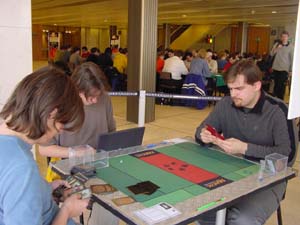 Vladimir chose to play first and mulliganed as his first hand didn't contain any land. While Carlos Romao takes place to support his Bandana friend, Amiel shows me a good opening hand including Sparksmith, Canopy Crawler and Erratic Explosion.

Komanicky starts with Primoc on turn three followed by a morph creature on turn four. But Amiel's first turns are far more annoying for Vlad as the Frenchman draws his second goblin and plays a 4/4 Canopy Crawler. Komanicky tries to react by playing Charging Slateback, another 3 toughness creature, but after a few swings it quickly appears that he can't win the race. Game 2, despite being as short as the first one, is a lot more interesting. Komanicky doesn't draw a fourth land before turn 7 but his turn three Primoc hurts Amiel a lot more than in the first game. His life goes down very fast, 18, 16, Erratic Explosion for four on Spitting Gourna. Rogon arrives on the table as a 5/5, and despite the Sliver Tenenbaum manages to deal Komanicky a few damage, but the clock is still on.

14,12,10,8,6, Amiel doesn't have much time left to recover. Rogon and Wirewood Channeler can't get past the Sliver and morph defense, and as Vlad got a Skirk Marauder back from Aphetto Dredging, Tenenbaum only has two turns to win. He played Silvos and announced his end of turn.

Komanicky enchants his flyer with Crown of Fury, attacks (14-3) and adds another blocker. The game seems to be over then, but Amiel has Wave of Indifference in hand and manages to avoid a third game by attacking with Silvos, Channeler and Rogon for the win.