Round 3: Walter Witt vs. Juan Reuter 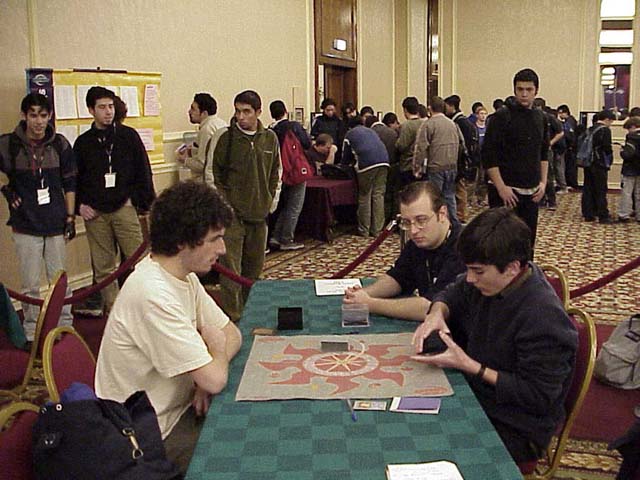 These two Chilean players are well known in South America, gathering quite a large crowd to watch the local talent. Witt is one of Chile's finest, attending Worlds this year and finishing 2nd place at Grand Prix Buenos Aires. Reuter is less well known outside of his own country, but he's been considered one of the people to watch at this event. Witt is playing a minimal creature Black/Red/Blue control deck, similar to the deck played by Alex Borteh. Reuter is playing Trenches Control, made famous by Ben Seck.

At the beginning of game one, both players started with reasonable hands and continued to lay land after land, highly important in the long drawn out control games these decks often end up playing. Witt started with the first action of the game, casting Fact or Fiction to net himself a single Nightscape Familiar instead of a pair of Exclude and more land. The Familiar was Excluded by Reuter, who followed up on his next turn with a Goblin Trenches.

In matches like this one, that can often spell the end. Reuter cautiously put out a few goblin soldiers from the Trenches, and Witt started to cast Prophetic Bolt after Prophetic Bolt. The bolts brought Reuter to a low 8 before Witt Voided away the goblins on the table.

This didn't stop the Trenches though. A Rage backed up the token-beatdown before Witt could make use of his own burn to finish Reuter off. Witt and Reuter spend a huge amount of their sideboards for each other, with Reuter bringing in multiple copies of Gainsay, Disrupt, Galina's Knight and Lightning Angel. Witt brought in Lobotomy, Disrupt, Gainsay and Emblazoned Golem. 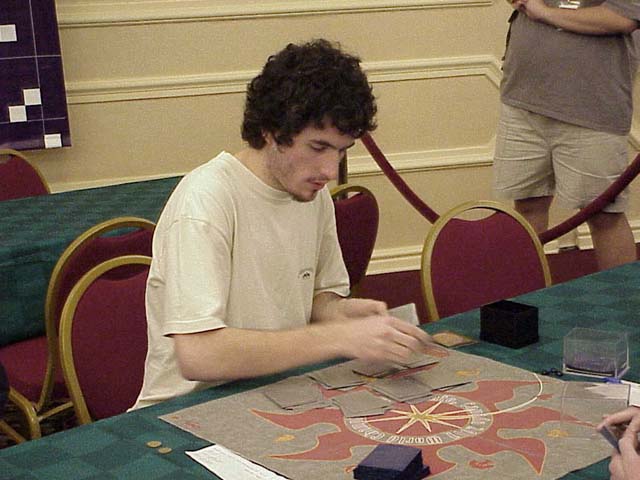 In game two, both players kept reasonable hands again, with Witt making the first move of the game on turn 5 with an Emblazoned Golem. The Golem hits the table and soon finds itself facing off against a Galina's Knight. Taking turn after turn of beats, Reuter finally pushed through a Fact or Fiction, netting himself a Lightning Angel and land.

The game slowed down after the Angel hit the table. While the Angel swung in the sky, a few skirmishes over Fact or Fiction happened on both sides of the table, but no one was able to get one through. Finally, still low from the early Emblazoned Golem, Reuter falls to Witt's Urza's Rage with kicker.

The third game started out with quick creatures on both sides. Reuter dropped a turn 2 Galina's Knight, while Witt follows up with a pair of Nightscape Familiars. Things quickly go bad for Witt, when a Fire hits both Familiar's off the table, and a Goblin Trenches hits the table just afterward. Void buys a turn for Witt, and a Malice takes out the Knight, but the Trenches are more than enough to finish the job.