two competitors came into this round off perfect 2-0 records. Interestingly, they were both using the same color scheme from their drafting table: blue-white. Antoine's deck was extremely aggressive, with Amrou Scout, Outrider en-Kor, and double Knight of the Holy Nimbus. Sam's deck was slightly more controlling, with a Sliver component, multiple Castle Raptors, and two Sacred Mesa.

The banter was light as the players discussed draft strategies and previous matchups. As soon as the round began though, it was all business. After a sincere but curt "good luck," the two pros began the battle. 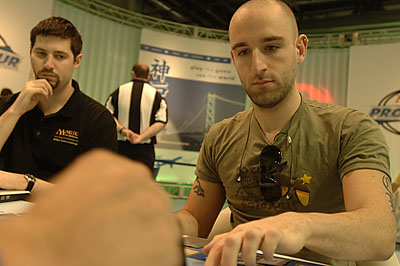 Sam, on the play, kept his opener, as did Ruel. Antoine had the first moves of the game, a second-turn suspended Errant Ephemeron into a third-turn Drifter il-Dal and suspended Duskrider Peregrine. Sam wasn't resting on his laurels through this, as he came back with Opaline Sliver and Venser's Sliver. Two Calciform Pools from Sam prompted Antoine to ask if Sam was packing an Akroma. Sam smiled ever so slightly, than played out a Castle Raptors to block the incipient suspended creatures. Raptors kept the fliers home, but Antoine wasn't done playing beaters. Double Knight of the Holy Nimbus were summoned, to which Gomersall replied with double Flickering Spirit. Back and forth the creatures attacked, both players very interested in finishing the game as quickly as possible. A potentially backbreaking Riftwing Cloudskate on Castle Raptors from Antoine was foiled by Sam's Momentary Blink.

With Sam at 8 life and the Raptors attacking Antoine down to 5, Ruel had a decision to make. If he attacked with everything, he would lose a ton of creatures but would get Sam down to 2 life. Theoretically, the Drifter would finish the game the next turn. If Sam had a trick, however, then Antoine would be crippled and probably out of the game. Ever brave, Ruel made his attack, and Sam blocked appropriately. After combat, Antoine played an Errant Doomsayer, his last line of defense against Sam's creatures. Sam untapped and played his final card, a Wipe Away on the lone blocker. Antoine had no response, and they were shuffling up for Game 2.

Antoine: "I've seen that whoever has been playing first often gets the win."
Sam: "I've found that be true as well." 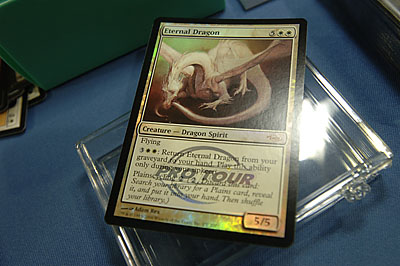 During their sideboarding, both players lamented not being able to play their promo card, succinctly identifying the potency of adding an Eternal Dragon into their decks.

Antoine quickly kept his initial seven. Sam agonized a bit over keeping a hand with two Sacred Mesa but decided to keep as well. Antoine started off very quickly with Knight of the Holy Nimbus, Outrider en-Kor, and a morph (Vesuvan Shapeshifter). Via Calciform Pools, Sam played a fourth-turn Castle Raptors against Antoine's army. The Raptors were snapped back, and the creatures came in for another 6 points. The second time the Raptors came down, they stuck, and things ground to a standstill as each side developed the board. A Sacred Mesa off seven mana from Sam's side threatened serious token accumulation. This was too much of a threat to Antoine, who attacked with all his creatures. Two mana were spent on creating a blocking Pegasus, and two were spent turning Knight of the Holy Nimbus mortal. Post-fray, Antoine played his Cloudchaser Kestrel, blowing away the Sacred Mesa. The second Mesa managed to stick around.

Antoine wasn't through fighting yet. Pentarch Ward on the Kestrel gave the flier pro-Sam, and in it came for unblockable damage, bringing Ruel's opponent to two life. On the following turn, Sam's Telekinetic Sliver-enhanced-Sliver attempted to tap down the Kestral. Antoine responded by turning the sliver white, and the players shuffled up for Game 3.

Antoine: "If only you were able to play first that game."
Sam: "True." 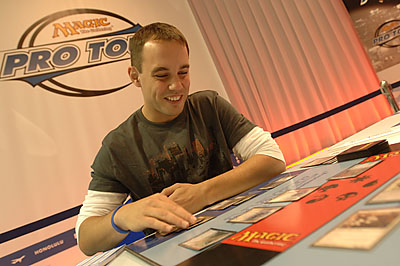 Antoine Ruel is all smiles.

Sam was forced to mulligan his opener but kept his next six: an Opaline Sliver and five lands. Antoine had the first play of the game, an Amrou Scout. This rebel searcher was one of the most powerful cards Antoine could play in the blue-white mirror. Antoine, concerned with the split second of Wipe Away, began to main-phase his rebel searching. Meanwhile, Sam's draw had improved considerably as he added Watcher Sliver, Castle Raptors, and Weathered Bodyguards to his side of the table; excellent defense against Antoine's steadily increasing army. Finally, after putting into play Zealot il-Vec, Outrider en-Kor, and double Nimbus Knights, Antoine sent his creatures rushing in. Sam made his blocks and double-blocks appropriately, leaving Weathered Bodyguard to absorb the unblocked Zealot and Outrider. Unfortunately for Sam, Antoine had the +2/+0 half of Fortify which, after damage, had completely wiped Sam's board clean. Sam couldn't come back from losing every single creature and conceded to his opponent.
Antoine Ruel defeats Sam Gomersall 2-1.