Round 3: Zvi Mowshowitz vs. Gabriel Nassif

To the surprise of absolutely no one, Mowshowitz came to Yokohama with TurboLand. So far it's served him well, as he finds himself against Gabriel Nassif in the third round. The catch? Nassif is playing combo as well, running Enchantress. Both decks are not very popular, so neither player knows quite what to expect or what to do.

Nassif- "I have no clue what's going on in this match." 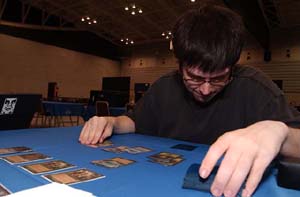 Mowshowitz played Oath of Druids, while Nassif had Trade Routes. Frantic Search let Nassif discard Wall of Blossoms and Argothian Enchantress, and Enchantress's Presence hit play. On the following turn he played Words of Wind, and Mowshowitz cast Intuition on end step, getting three Accumulated Knowledge. He cast the other earlier in the game, and used this one to draw four cards. He then played Exploration, and ended his turn. Nassif played a second Presence, but it was Counterspelled (Nassif still got to draw a card off the first one already in play).

With the help of Serra's Sanctum he started going off, using it to play Fertile Ground and then bouncing it with Trade Routes, putting it back down untapped. He activated Words of Wind, played another, and bounced back Fertile Ground. Seal of Removal provided another card, and Fertile Ground was replayed. Words of Wind was activated again, bouncing the Seal and bringing Mowshowitz to three lands. Mowshowitz played Time Walk, and seemed pretty unhappy when he took his extra turn. He simply played Oath of Druids, and ended his turn.

Nassif played Argothian Enchantress, which was Counterspelled. He floated a bunch of mana and played Fertile Ground and Wild Growth a few times, using Words of Wind to bounce them back to each other, while Mowshowitz had to bring back a few land. He still had some options, and played a Scroll Rack to set up a better hand. Mowshowitz started to wonder what cards he wanted to keep, as both players agreed that Nassif had likely not made the right play last turn, but that it probably wouldn't matter anyway.

A second Exploration was followed by another land, putting Mowshowitz into a better position, but leaving him tapped out. Nassif had more resources to work with on his turn, as he played a lot more enchantments and untapped Serra's Sanctum with Cloud of Faeries. Nassif seemed to be having problems figuring out how to win, and actually showed Mowshowitz his hand as he was thinking it through. Once a second Presence hit play, Mowshowitz conceded. 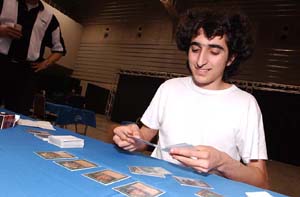 Mowshowitz- "It could take you five minutes to figure it out, or I can just scoop now."

Nassif's first Enchantress was Counterspelled, but he had enough mana to play a second on the same turn. Meanwhile, Mowshowitz played Treetop Village and Exploration. Nassif had a second Enchantress and played Words of Wind, drawing two cards. Mowshowitz cast Intuition, getting three Oath of Druids. The Oath came into play, and Naturalize dealt with Words of War. Frantic Search put Ray of Revelation into the graveyard, and it destroyed Oath of Druids. Enchantress's Presence made the situation even better, and was followed by yet another. Mowshowitz conceded on his turn.