Matt qualified for this event in Vancouver, WA through the JSS Challenge Series. He's been playing this game for three years. He's playing Blue-Green Madness in this event today. 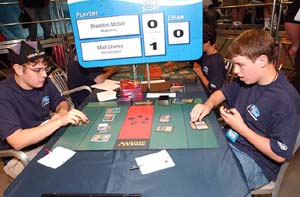 Brandon qualified through a JSS Qualifier he won in Mobile, AL. He's been playing for about a year and half, having started playing during the Odyssey block. Brandon is playing the Squirrel-Opposition deck that was popular a while back.

Brandon looked at the table as Matt turned his Mongrel and Rootwalla sideways. "No interceptions," he commented, dragging a term out of the closet unheard of since the Portal disaster. Brandon wasn't willing to put his Merfolk Looters in the path of the army from Matt, so he takes six to his dome.

As Matt added a Phantom Centaur to the table, Brandon looked concerned. The concern became a little deeper when he tried to cast Opposition a turn later and watched it run headlong into a Circular Logic.

Stuck for too long with only four mana, and unable to resolve his Opposition, Brandon scooped. 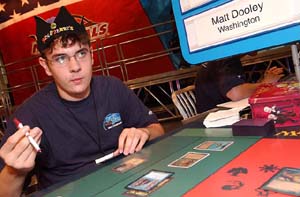 Brandon decided to remove a Merfolk Looter, two copies of Squirrel Nest, a Deep Analysis and one of his Opposition. He replaced them with three copies of Engineered Plague and two copies of Krosan Reclamation.

As the players shuffled up Zvi Mowshowitz and Brian Hegstad sit down at the Nationals Feature Match table. Brandon and Matt looked over, a little bit of hero worship in their faces, until Brandon asked, "Which one is Zvi?"

"You couldn't recognize Zvi," Matt remarked back at him. "Do you visit Brainburst or Sideboard?"

"I make my own decks," Brandon quipped back. "I don't use the internet for that."
Around the mildly sarcastic remarks they do manage to get their decks shuffled, presented and Game 2 begins.

Brandon only had one land on the table after three turns, but he had used that one land to get a Llanowar Elf and two Birds of Paradise on the table. The Wild Mongrel he played so that he had a threat on the table looked a lot less spectacular though thanks to a Stupefying Touch from Matt.

Matt swung with his Mongrel, still complete with activated abilities, and it ran headlong into a Squirrel token. The Squirrel Nest sat on the one land that Brandon had played, and it appears to have decided that its mission in life is the production of chump blockers. It produced chump blocker after chump blocker, keeping the Mongrel on Matt's side of the table firmly away from the head of Brandon. 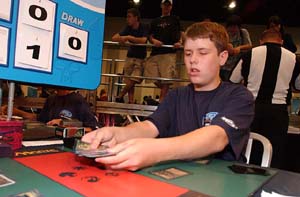 The Mongrel made a swinging motion into the Red Zone from Matt's side again. He was joined though by an Arrogant Wurm that had been madnessed onto the table. The Mongrel and Wurm received further company in the form of another green hound. Brandon had fallen silent. The mouth had slowed down as the game got out of control. Still unable to find a second land, and forced to start blocking with his mana producing Birds and Elves, Brandon was left with few options.

Then, a change occurred. A large yellow rubber duck hit the table on Brandon's side. As he placed the duck on the table he joked about it being, as he called it, "tech." The rubber ducky made an amazing 6/6 Wurm token, but it didn't matter in this case. With an Arrogant Wurm and two Mongrels on the table Matt was still in control. Brandon had tapped out both of his mana producers and both of his lands to get that Wurm into play and now could only block one of the attacking creatures. Matt swung with all of his men and then sacrificed the Centaur Garden, forcing enough damage through to end the match.