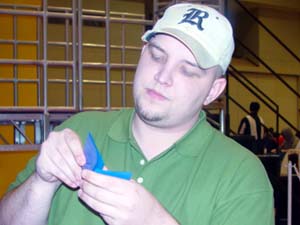 two were teammates last season along with Bob Maher at Pro Tour Boston, where they placed in the Top 4. Wise and Reeves are primarily known as being limited specialists, but their constructed skills shouldn't be underestimated either. Both came into this round with 3-0 records.

Wise mulliganed down to four. He played Chromatic Sphere and Arcbound Worker on the following turn, missing his second land drop. Reeves played a Talisman, and Wise brought out Skullclamp. Flamebreak killed it off, and Reeves destroyed Wise's only land with Oxidize. He followed up with Arc-Slogger and a Megatog, and with no lands Wise was in no position to put up a fight.

Wise summoned a Worker, and Reeves had a first turn land destruction spell in Detonate. Disciple of the Vault gave Wise another threat, but he had to play it off Glimmervoid. He cringed as Reeves took his turn, hoping that the Worker would stay around and he'd avoid losing his only land. It stayed on the table, and Wise played another Glimmervoid.

Wise - "You're going to completely screw me up with that three damage card." 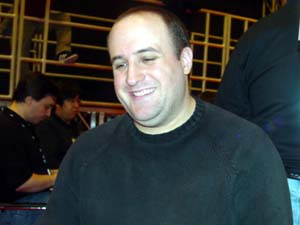 Reeves didn't have Flamebreak, and Wise continued to build up his board with another Dsiciple, Frogmite and Ornithopter. Trinisphere slowed things down a bit, but Wise already had plenty of threats in play. His attack brought Reeves down to seven, and Furnace Dragon came out to completely annihilate the board. Wise only had two Disciples and a new Ornithopter to Reeves' 5/5 flier, and Viridian Shaman made things even worse. Flamebreak left Wise with no permanents out at all, and he conceded.

Williams - "Hey, you have no permanents in play. You're not allowed to talk!"
Wise - "Better men than you have tried to stop me from talking."