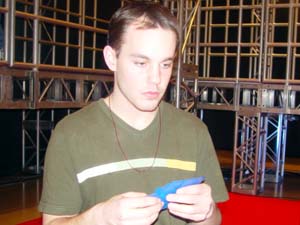 into this weekend many players were grousing about a two-deck format. Everyone assumed that there would be Affinity decks and anti-Affinity Green-Red decks. The problem with all of the other decks was that they only beat one or the other of the aforementioned decks.

Viva la France! Gabriel Nassif and the Ruel brothers concocted a nearly mono-green monstrosity that revolved around Cloudpost and Tooth and Nail. The deck is solid against both of the anticipated archetypes and has a good game against anything else the field might toss against them.

Antoine and Bernardo are playing card for card copies and both players have breezed through the tournament to this point. Antoine was not happy to be playing his friend but he was quite pleased with their choice in deck. "There are seven of us playing this deck and four of us are 3-0. Neither of us have lost a game so far today."

"I played this guy five days ago for the Top 8 of Grand Prix: Madrid. He made it to the finals you know." Bernardo Da Costa Cabral's finish in Madrid may have been easy to overlook in flurry of excitement over Kai Budde's seventh Grand Prix title but you cannot overlook the surging French Magic scene.

Both players opened with a pair of Forests. Antoine accelerated with a Talisman of Unity and Bernardo did the same. Antoine stunted his friend's mana development with a Viridian Shaman taking out the Talisman but he failed to make his third land drop. Bernardo used Sylan Scrying to find a Cloudpost and played it out. With Cloudposts in both decks there was the potential for staggering amounts of mana to be generated.

Antoine was still without his third land and played another Talisman. Cabral used Reap and Sow to find another Cloudpost and passed the turn. Antoine played a Solemn Simulacrum and searched out a Forest. Cabral played a Talisman and then cast Tooth and Nail for a Platinum Angel and a Daksteel Colosus but he did not have enough mana to entwine it and they would have to sit in his hand waiting to be hard cast.

Antoine got in for four points with his guys and had five mana to work with on his turn. He decided to use the land destruction component of Reap and Sow to destroy one of Cabral's Cloudposts--it was the equivalent of destroying three lands. Cabral played a Mindslaver and passed the turn.

Ruel was ready with an Oxidize and buried the artifact. He got in for another four points and played his second copy of Jens Thoren's invitational card. Jens was sitting a few inches to Antoine's left at the next feature match table but he did not notice.

Cabral played a Sylvan Scrying for another Cloudpost and played Oblivion Stone. Ruel had another Oxidize and smoked the Stone. With that out of the way he played Leonin Abunas. Cabral played and activated a Mindslaver on his next turn and cursed in French at Antoine's grip which included Oblivion Stone, Tooth and Nail, and Cloudpost. If the Cloudpost was any other land he would be able to play and activate the Stone. He had to satisfy himself with casting Tooth and Nail and finding nothing. 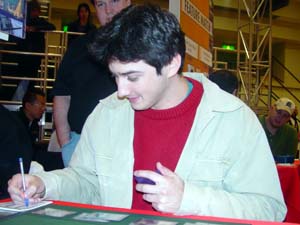 Cabral cast Tooth and Nail with entwine on his next turn and put Duplicant--targeting the Abnas--and a Platinum Angel into play. He was holding Oxidize and used it on a Talisman to keep Antoine at least a turn away from Stone mana.

"I'm sorry," said Antoine as he revealed a Viridian Shaman off of the top of his deck. He killed the Angel and attacked Bernado to death.

Both players laughed and chatted in French as they sideboarded. Even their sideboards were identical and they mock glared at each other as they tried to figure out each others Game 2 strategy.

Bernado led off with Forest and followed with a Tel-Jilad Chosen. Antoine, who had led off with Cloudpost also had a Chosen and the two players shared a laugh as their creatures collided in the red zone. Both players had Pulse of the Tangle for turn three and their tokens traded as well. Bernardo shrugged as he played a Viridian Shaman with no target. Antoine had his second Coudpost on turn four and was able to play a Solemn Simulacrum. He played another on the next turn.

Cabral used Reap and Sow as Creeping Mold to keep the Cloudpost action from getting out of hand and played a second Viridian Shaman to smoke one of the Simulacrums. A turn later he sent both his Shamans and a Blinkmouth Nexus into the red zone and Antoine drew a card when his Simulacrum bore the brunt of one of the attackers. Antoine had his third Simulacrum of the game and a turn later was able to use Tooth and Nail to find a Darksteel Colossus and a Leonin Abunas putting them both into play.
Cabral was muttering n French and used Rap and Sow to find a Cloudpost. Antoine entwined a Reap and Sow on his own turn and Cabral scooped before he could resolve the spell. He revealed the Tooth and Nail languishing in his hand.