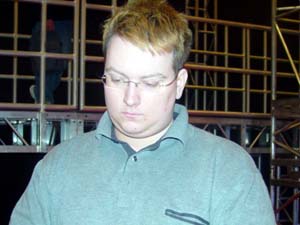 , sitting in the 1-2 bracket, looked even more dejected than usual. Well, that's a bit of a lie, as he looked just the way he always looks. Actually, he tends to remind me of Marvin, the depressed robot from the Hitchhiker's Guide to the Galaxy, which ties in nicely to the artifact version of himself that's on Solemn Simulacrum. His opponent, Jin Okamoto, is an acclaimed Japanese player who also has quite a poker face.

Jens won the die roll and started things off with, "I'll play. Good luck." Jin nodded and the rest of the match was played in silence.

It didn't take much debate before Jens decided to ship his hand back for a new one. He then led with Blinkmoth Nexus and Pyrite Spellbomb. Jin had Tree of Tales and a mainphase Oxidize on the Spellbomb, denying Jens a future card in an attempt to punish him for the mulligan. Jens followed that with a second Nexus and a Talisman of Indulgence. Jin matched with a Mountain and Talisman of Unity.

Jens simply played another land and attacked for two points with his Nexuses. On Jin's turn, Viridian Shaman sent a Talisman to the graveyard. Jens answered with a Great Furnace and a new Talisman plus an attack for one.

The Japanese player drew and stared at his hand of two Furnace Dragons, two Viridian Shamans, and a Tree of Tales. Shaman entered the red zone for two and, in a repeat of last turn, a new Shaman came down and killed a Talisman. Jens, seemingly unaffected by all the mana denial, played yet another land and sent the pesky Blinkmoths in for another two points. He then took four on the return swing and lost his Great Furnace to the third Shaman.

Jens then summoned Jens in a strange paradox that should possibly have caused the world to cease to exist but didn't. He fetched a Mountain out of his deck.

Jin played a Mountain, tapped six, and resolved a Furnace Dragon, removing three of his own mana sources but also clearing the way for his three Shamans. His eleven power of attackers earned a quick concession.

Jens was unfortunately forced to mulligan again, but he was still able to lead with double Cloudpost. Okamoto had a turn two Talisman. Jens had no further lands, but the four Cloudpost mana let him play a Talisman of Indulgence, a Shatter on the Talisman, and a Pyrite Spellbomb. He then lost his own Talisman to a Viridian Shaman. A Mountain on top of his deck let him crack his Spellbomb for a card, Shatter Jin's Tree of Tales and cycle through yet another Spellbomb.

Jin had no play, just a replacement Forest. Jens burned for one, playing Arc-Slogger. Jin, holding two copies of Pulse of the Forge, chose not to use either of them on end step. He untapped, played a Talisman, and ended his turn.

Jens attacked for four with Arc-Slogger and placed down another one, putting quite a bit of pressure on the Japanese player, who could only summon a Solemn Simulacrum of his own. When Jens declined to shoot either of the blockers before attacking, it hinted that he needed both of his Mountains for something else. Sure enough, after both Sloggers were chump blocked, a third one entered play.

Jin's Shrapnel Blast took down one Arc-Slogger but the other two and a Blinkmoth took him down to seven. On end step, he stared at the two Pulses still in his hand and tried to figure out a way to win the game. With his opponent at sixteen and with very little time, he was surely regretting his earlier decision to not use a Pulse. Shaking his head, he decided to concede.

Jens had both a fourth land and a Solemn Simulacrum to fetch a fifth. A fourth land for the Japanese player enabled a Simulacrum of his own and the board positions continued to be a mirror. The two creatures traded and both players drew a card. Jens played out a foil Arc-Slogger with a Mountain showing.

Jin untapped and considered his numerous options. He chose to Shrapnel Blast the Arc-Slogger, sacrificing Tree of Tales, followed by Journey of Discovery searching up two Mountains. Jens had only Pyrite Spellbomb.

Jin played his sixth land and surveyed the empty board, then summoned Arc-Slogger with an open Mountain. Jens drew a card from his Spellbomb, then another for his turn. Duplicant entered play and grew to 4/5 after eating the Arc-Slogger.

Jin added Talisman of Progress and calmly Viridian Shaman'd away the Duplicant. Jens tapped eight and played out Furnace Dragon, removing only his own Great Furnace and his opponent's Talisman from the game. Regardless, it was still a large, flying 5/5 monster. Jin had the Fireball and the players continued to trade threats and answers. Jens found an Arc-Slogger waiting for him at the top of his deck and put it into play.

Jin, with seven lands on the table, had the option of playing out either his own Arc-Slogger or a Solemn Simulacrum. He chose to stick with a card advantage strategy and played out the Simulacrum, searching for a seventh Mountain. Jens tapped three for Flamebreak and attacked for four, bringing the all-important life totals to 15 to 13. Life totals are more important than usual in this matchup, with both players packing direct damage in the form of cards like Fireball, Pulse of the Grid, and Arc-Slogger. 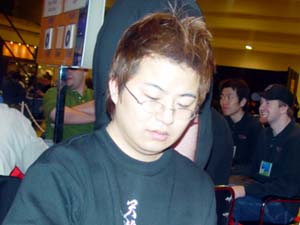 Jin played his own Arc-Slogger, then targeted Jens's three times, removing much of his library from the game. In response, Jens targeted Jin's dome three times, bringing him down to seven. He untapped and showed Fireball for the win.

As it turned out, playing the Arc-Slogger over the Simulacrum may have been the better play, as it would have kept his life total at a much higher number and/or forced Jens to use some of his direct damage to force damage through.