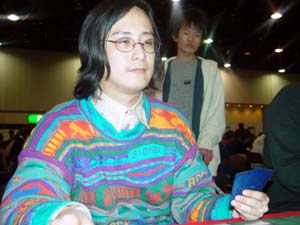 are old school heroes, and then there are original gangstas. If you're inclined to utilize such vernacular, once you travel across the Pacific there's no one more O.G. than Itaru Ishida and Satoshi Nakamura. These two players were the pioneers of Japanese Magic, making a name for the country on the Pro Tour long before anyone had heard of a Tsuyoshi Fujita, a Masashiro Kuroda or a Masashi Oiso. That's pretty much where the comparisons end though, because both players are polar opposites. Satoshi Nakamura is a colorful guy both literally and figuratively, always wearing eye-catching shirts and hats, and designing even more interesting decks. All this, with a personality to match. On the other hand, Ishida is always serious and focused, to the point that if you can find a picture of him smiling in any of our past coverage over the years, we should probably send you a free booster box to reward your long hours of research.

Ishida mulliganed his opening hand. He had a second turn Myr, and Nakamura played Arcbound Stinger. Ishida summoned Frogmite, and the Stinger came through the air for a point of damage before Nakamura played Yotian Soldier. Ishida played Welding Jar, and Nakamura summoned Neurok Transmuter. It died quickly to Echoing Decay, and Ishida's Clockwork Vorrac was saved from Shatter thanks to the Jar. Nakamura added some size to his army with Quicksilver Behemoth, which slowed things down a bit. With the game at a stalemate, Nakamura's Serum Tank seemed to be just the thing to help him pull ahead. Bonesplitter made the Stinger a much bigger threat, and with no other fliers on the table it was able to get through for three damage. Ishida's Vorrac had grown to 6/6, attacked, and was blocked by the Behemoth and Soldier. Thanks to Irridate, both of Nakamura's blockers died. Ishida played an Auriok Glaivemaster, and equipped it with Banshee's Blade on the following turn. He sent his whole team in for an attack, and lacking many options, Nakamura used Barbed Lightning to kill the Frogmite. Seven damage still came across, bringing Nakamura to ten. He came back easily enough thanks to the card advantage provided by the Serum Tank. He stole the Blade with Carry Away, summoned Somber Hoverguard, and Ishida conceded. 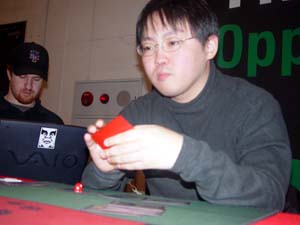 Ishida played a first turn Viridian Longbow, and had a third turn Skyhunter Cub. Nakamura summoned a Krark-Clan Stoker and the Cub grabbed the Longbow, attacking for three through the air. Nakamura swung back for two, and played Wirefly Hive. Ishida played Goblin War Wagon, and Nakamura played a bomb in Sword of Light and Shadow, equipping his Stoker and attacking for four. Ishida cracked back with the Cub and played Frogmite, forcing Nakamura to just take a 1-for-1 trade if he attacked with the Stoker. Indeed, that's what happened as it was double blocked and traded with the War Wagon in combat. Still, the Sword was hanging around, and Cathodion came out to provide another body to hold it. Blinding Beam slowed things down a bit, as Nakamura just played Yotian Soldier. A turn later, Essence Drain killed the Cub, and Ishida had no way to keep up with the Sword.