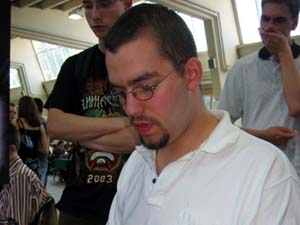 byes are over. The Pro Tour big names finally get to shuffle up their decks. To start things off the always silent Mattias against the always loud Andre Mueller.

They playerd "land-go" for a while, with the Swede missing his third land drop. To find it he blew a Tel-Jilad Justice on a Darksteel Ingot (just to "scry"). He found a Cloudpost but couldn't find another land.

The German kept on playing Islands and Ingots. Then he played March of the Machines. That gave him two monsters (the Darksteel Ingots). A draw step later, still at seventeen Mattias decided he had had enough.

Again Andre played a first turn Serum Visions, but this time Jorstedt had the tools to avoid the screw. He played second turn Sylvan Scrying (for Stalking Stones), third turn Eternal Witness to get it back.

The Witness started swinging and Mueller used Thirst for Knowledge, followed by Serum Visions to find some answers. He settled on playing his own Cloudpost.

The silent Swede played a second Witness to get his overworked Scrying back.

Andre: "The beats, the beats."

That was just the invitation Mattias was looking for. He thought for a while, activated his Stalking Stones and dropped the German to nine. A turn later, the German picked up his cards.

They dropped mana until Mattias dropped Troll Astetic. The German seemed unfazed and kept on his "card drawing" ways, with a Thirst for Knowledge. The Swede walked Molder Slug into a Condescend. That powered out March of the Machines, which turned the Darksteel Ingot into a Troll-stopper.

Mattias took the opening to play a second Slug. This one stuck... until the end of turn. Then Echoing Truth sent it away. The Swede tried in again, this time meeting Last Word.

The German was slowly regaining control of the table, and played a second Ingot. Jorstedt tried to answer with his Blinkmoth Nexus before playing a second Troll.

Mueller sent his artifact-turned-creature crew in... sneaking three damage past the Trolls. His opponent stared at the table nervously and fired a Tooth and Nail. 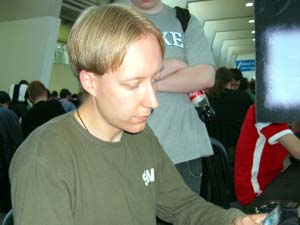 The German thought about it... and allowed it with a smile. Out came Duplicant and Eternal Witness. The Duplicant took out a Darksteel Ingot, dying in the process, to Mattias' surprise.

Serum Visions gave Mueller zero help and a Thirst of Knowledge in response to Mattias Jorstedt's next Tooth and Nail also came up empty. The German shook his head, cursed his sideboarding and scooped.