Round 4: Alex Shvartsman vs. Michihisa Onoda 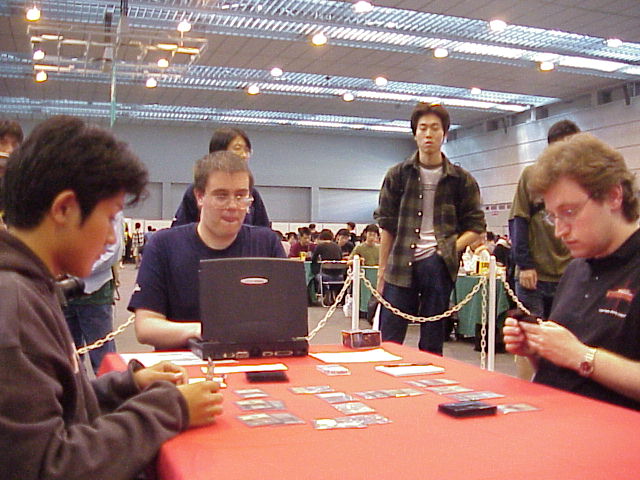 Neither of these players need an introduction. On our right: Alex Shvartsman. Fixture of the non-US Grand Prix. Sideboard writer. On our left: Seventeen year-old Michihisa Onoda. Quarterfinalist at GP Singapore. 4th at Japanese Nationals.

Onoda won the die roll, and chose to start. Shvartsman hit the floor with a first turn Diligent Farmhand, but Onoda chose to nip the agricultural tradesman in the bud with a Flame Burst. Shvartsman played a Krosan Avenger, which then had to face down Onoda's Springing Tiger. Throwing caution to the wind, Shvartsman sent the Avenger. The Tiger refused to budge, and Onoda went to 17. Shvartsman then threw a Seton's Desire on the Avenger and passed the turn.

Onoda swung with the Tiger and threw down a Dusk Imp, then a Blazing Salvo at the 5/3 Krosan Avenger. If Shvartsman took 5 damage, Onoda would enjoy a head start in the damage race. On the other hand, losing a creature would keep Shvartsman from potentially blocking the Tiger. So the valiant American stood in front of his Avenger, arms open, to embrace the pain and preserve his precious creature. 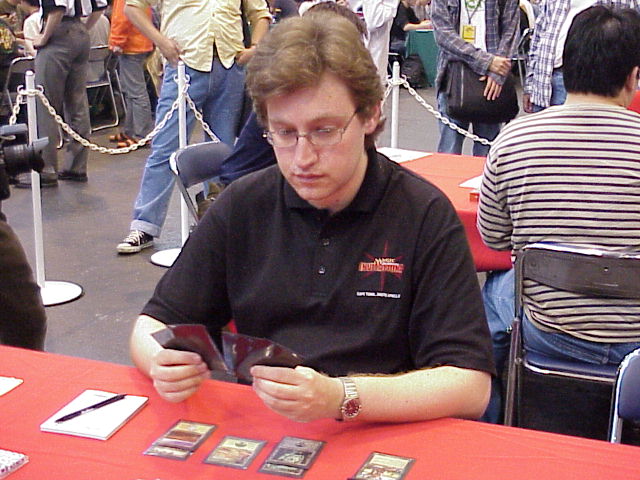 Onoda gasped as Shvartsman played a second Seton's Desire on the trampler, bringing the tree-hugger's stats to 7/5. Shvartsman punched through, bringing Onoda to 10. Onoda then tested Shvartsman's resolve by throwing out a Dwarven Strike Force, randomly discarding a Beast Attack to swing and bring Shvartsman to 5. Shvartsman was undaunted and attacked through to bring Onoda down to 6. Onoda's army attacked again, but met an Embolden which kept Shvartsman at 3. Onoda then threw down a Rabid Elephant which placed its ponderous bulk in front of the unstoppable Krosan Avenger. Onoda went down to 3. Shvartsman then sealed the match by Afflicting the Dusk Imp with a nasty, unpleasant virus. Onoda swung and brought Shvartsman to 1 after Embolden, and offered the hand. Shvartsman gasped in relief; Onoda's countenance remained granite firm and unchanging.

"Do I have anything in my sideboard for him? Eh, probably not," quipped the foreign Grand Prix fixture. Shvartsman added a Moment's Peace while Onoda changed 4 cards. Onoda again opted to play. This decision is a bit surprising to this author, as card advantage becomes very critical with threshold playing a factor. Shvartsman merely shrugged and smiled.

The early game kicked off with Shvartsman's Wild Mongrel coming into play off a sacrificed Bog Wreckage to face Onoda's Crypt Keeper. Onoda played a Dwarven Recruiter, but chose not to search for his Dwarven Strike Force. The 2/2s stared each other down from across the lines; Alex patted his Mongrel with affection. "Good doggie!"

Both players had a handful of green cards but were strugging for forests. The game stalled, and Onoda decided to sacrifice a Ravaged Highland to play a Diligent Farmhand. The following turn, Onoda played a Pardic Firecat, but kept his men in reserve. Shvartsman played his 4th swamp (along with an Abandoned Ruins) and kept the hounds home. Onoda sent the crew of Crypt Keeper, Dwarven Recruiter, Pardic Firecat, and Diligent Farmhand. Shvartsman blocked the 1/1 who was duly sacrificed by Onoda (along with Bog Wreckage) to search out a Forest. Finally, Onoda had the power of regular green mana on his side. 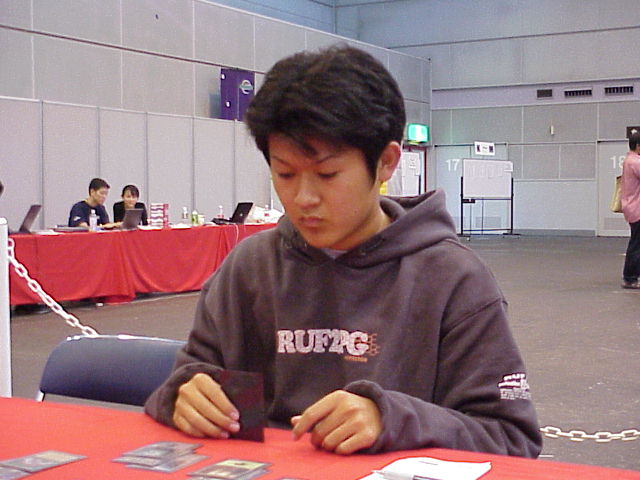 As if an informal ban on forests had suddenly been revoked, Shvartsman topdecked his first forest and played out Springing Tiger. Onoda kept his troops at home and added a Druid Lyrist. Shvartsman pulled a second Forest, and dropped a Zombie Assassin, then the next turn a Gorilla Titan! With two cards in the graveyard and an active Zombie Assassin in play, the Gorilla Titan loomed over the table. Sensing sudden impending pain, Onoda threw a Ghastly Demise out to which Shvartsman responded by using the Zombie Assassin to make the Great Grape Gorilla 8/8 and kill off Onoda's Pardic Firecat. Onoda then untapped and used a Patriarch's Desire to kill off the Wild Mongrel, cutting the Gorilla Titan down to size.

The midgame heated up fast and furious as Shvartsman attacked with his Springing Tiger, and Onoda tossed the Crypt Keeper and Dwarven Recruiter in its way. Onoda had reached threshold but Shvartsman was far away. Shvartsman threw down a fresh Springing Tiger to replace the old one. Shvartsman attacked the following turn and chose to take a Lava Axe instead of letting Blazing Salvo kill his kitty, bringing him to 3. But he had the situation well in hand with a Dirty Wererat and Whispering Shade offering imminent death. Onoda offered the hand and gracefully conceded.