Round 4: Alex Shvartsman vs. Osamu Fujita 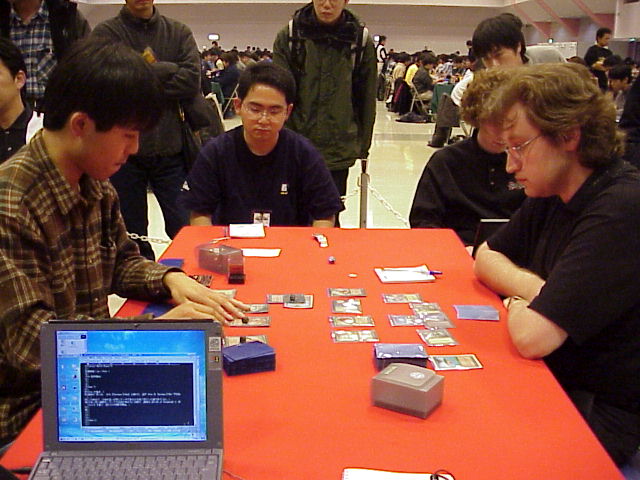 Round 4 is when the stars come out, and this match was evidence of that. On one side, Asian Grand Prix mainstay Alex Shvartsman. On the other, Japanese rising star Osamu Fujita, slowly building a name for himself in singles competition after a successful stint teaming up with Itaru Ishida and Katsuhiro Mori. The two meet today in a near-mirror, both running versions of the deck Mike Pustilnik used to win Grand Prix - Las Vegas. In fact, Shvartsman is using Mikey P's deck itself, having borrowed it from him before leaving for Japan.

After a mulligan from Fujita, the two matched Yavimaya Elders. Fujita's was sooner, thanks to a Bird of Paradise, but he was forced to blow it up to grab a pair of lands. Wall of Roots and another Bird made sure he would have ample mana.

The two played mirror Spike Feeders, but Fujita escaped the stalemate with Rancor on his Birds of Paradise. The card drew a scoff from Shvartsman, who joked that he was thankful his opponent had "at least one bad card". Shvartsman's next draw of Spike Weaver went well with his Treetop Village to give him some beatdown.

However, Fujita drew a Weaver of his own, and though Shvartsman had a second Feeder to get ahead on counters, it looked like he was behind. Fujita's Birds grew to four power thanks to a generous Feeder. Shvartsman let it hit him while he whittled Fujita's defenses and accumulated counters on his Weaver. 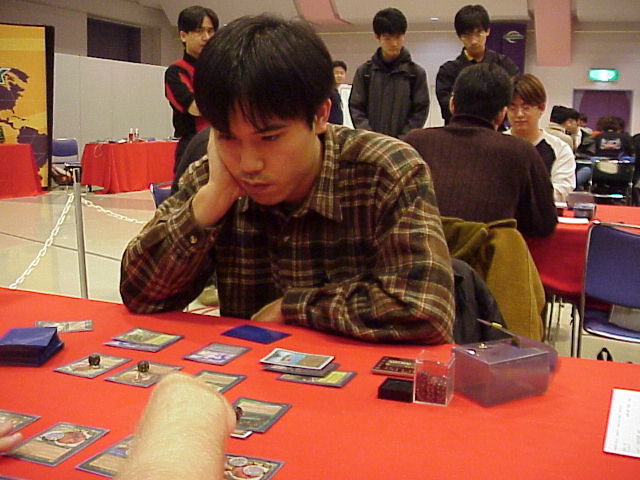 Soon, however, he was forced to start weaving. His draws were worse than mediocre. Three lands, a Bird and a Feeder were not what he was looking for. Fujita played Pernicious Deed and Vampiric Tutor to fetch a Spiritmonger. Still, he was willing to play the slow game, winding down Shvartsman's Weaver.

Shvartsman drew more land and a Weaver. Fujita drew Phyrexian Plaguelord. Shvartsman trumped with a Pernicious Deed that quashed Fujita's next attack and left him with just a Spiritmonger. Now things started to move Shvartsman's way. He swung for six with his Villages and had just enough mana left over to play Weaver and weave. Fujita was forced to stay back. Shvartsman plucked a Plaguelord of his own. After three tense turns of Shvartsman accumulating troops, Fujita decided that he had no way out and conceded, leaving just seventeen minutes in the match.

Shvartsman was in full control in Game 2. He had Duress for Diabolic Edict, Dust Bowl for Volrath's Stronghold, and then tapped out for Spiritmonger. Unfortunately for him, he'd forgotten about the Perish he'd seen in Fujita's hand. Had he waited a turn to Duress again, he would have been in the clear. 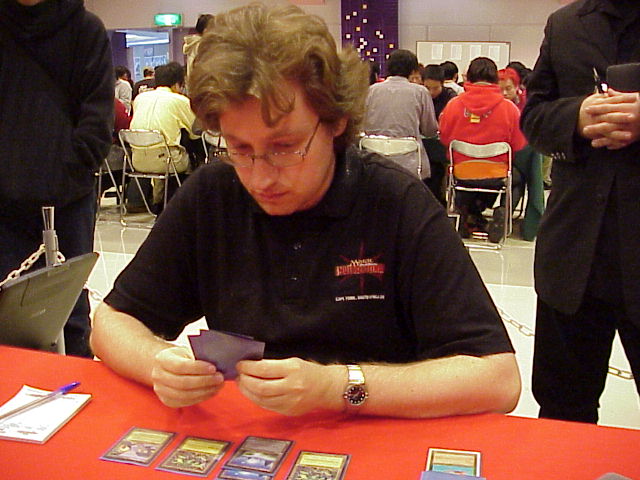 However, this just let Fujita extend with Phyrexian Negator right into Shvartsman's Living Death. Spiritmonger came back for its encore. Fujita held it off with Masticore, but Shvartsman was content to wait him out. When Fujita went down to one card for Weaver, Shvartsman Duressed away Living Death to force the death of the Masticore.

Fujita found Phyrexian Plaguelord, but Shvartsman had Volrath's Stronghold. What could he do? Weaver delayed the inevitable. Time ran out, and Fujita conceded to give Shvartsman the sweep.