Round 4: Alex Shvartsman vs. Rob Nadebaum 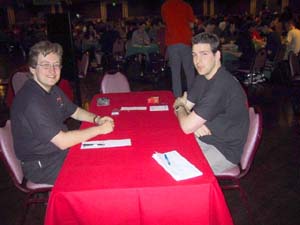 Truly, the titans clash in round 4 as we see the Pro-Tour veteran Alex Shvartsman, take on the reigning Australian Champion - Rob Nadebaum. The pre-game shuffling however showed them to both be quite relaxed in the Sunshine state engaging in friendly banter. However a deck check tenses everyone's nerves as it took over 15 minutes and a visit from the head judge, Rune Horvik. It was finally announced that both players had received warning for Marked sleeves with no pattern. The crowd waited patiently in anticipation.

Alex elected to draw first, and this was no surprise for Rob, whose second turn Werebear was met with a second turn Flame Burst. Their next offers were a Barbarian Lunatic from Rod and a Krosan Avenger from Alex. Rob grabbed the early tempo with an Afflict on the avenger and went in for an early beat.

Nothing from Alex next turn allowed Rob to force the pace with a Lithatog and a Filthy Cur. It was noted from both players, the awesome power of the Cur. While tapped out Alex picked off the Lunatic with a Patriach's Desire, but still no blocker. Rob then went 3 creatures ahead again with a Krosan Avenger, but like Alex's avenger, it was removed with an Afflict. It looked promising for the young Victorian as he beat twice for 3 points with the cur and the atog. 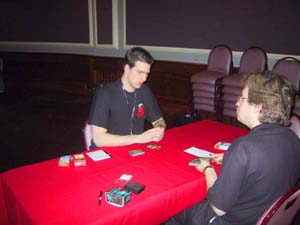 Turn 7 saw Alex play a dusk Imp that grew with a Seton's Desire - capable of blocking both attackers, and followed it next turn with an Infected Vermin with another Seton's Desire and served for 4 with the Dusk Imp. Rob then forced the pace by attacking with the Lithatog and the Cur, the cur of course being blocked bu the vermin. Alex was ahead, only taking 1 compared to Rob's 3. Alex tied the game up at 9 life each when again the dusk Imp, being the only flier on the table, was unblocked. Rob's answer to that was in the form of the menacing Stalking Bloodsucker. Which caused an uneasy standoff. Alex was covering his options by Vermining for 2 at the end of turn, this caused Rob to sacrifice a land to save the atog. The Bloodsucker finally swung - and was blocked by the dusk Imp, Rob of course elected to save it by pitching a card. At the end of turn the Vermin stung everything for 2 again Rob weighed his options and pitched his card to the Bloodsucker and then passed priority. Alex then passed it back - pointing out that he had in fact forgotten to sacrifice a land this time for the atog. D'oh! At best Alex could only had have hoped for a draw but grabbed the win from the gaping jaws of defeat. 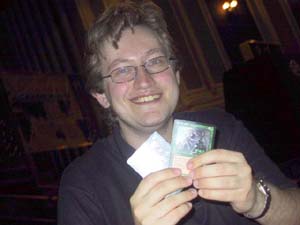 This time it was Rob that drew with Alex going for the good ol' second turn Wild Mongrel, which Rob replied with a Crypt Creeper. To Rob's surprise, the creeper drew the Flame Burst from Alex who then delivered with the Mongrel for 2. Rob brought out the Lunatic, and then let the Wild Mongrel through again - with Alex this time discarding Roar of the Wurm to make it 3 damage. He then played another land and flashed the roar for a 4th turn 6/6. So now we see why the Crypt Creeper had to go. Rob could only manage a Fledgling Imp. Alex then placed Seton's Desire on the Wild Mongrel - and Rob on 5 life. On the back foot from the start to be sure, Rob drew his card and shook the hand of everyone's favorite tourist. This is Alex's second trip here (Invitational in Sydney last year) and after a day like today he is definitely looking forward to the World Championships next year.