Round 4: Alexei Chubaty vs. Duncan McGregor 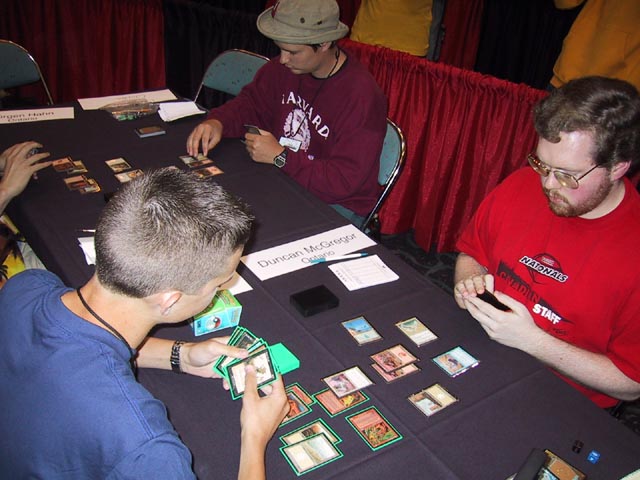 Neither player has made the Pro Tour, and shooting for their last chance at Worlds via the Canadian National team. They were off to a good start, both sitting undefeated after the first draft. If either can repeat that performance in this draft, a Top 8 is virtually assured. McGregor had planned to judge at Canadian Nationals, but instead received the very last invitation slot to pass down from DCI Rating, while Chubaty qualified in British Columbian Regionals with Fires of Yavimaya.

Chubaty mulliganed, but laid the first creature with a Caldera Kavu (immediately Hobbled by McGregor) and then a Kavu Recluse. After stalling on early mana, McGregor followed up with his own creatures, Aurora Griffin and Ceta Disciple, and the race began. Chubaty burned out a pumped Griffin, and McGregor quickly replaced them with a Razorfin Hunter and Glimmering Angel. Chubaty swept the board clean with a Bloodfire Infusion, and the game began anew.

Restarting with a Minotaur Illusionist and a Wayfaring Giant, McGregor clearly had control of the board, while Chubaty lacked a Swamp to make his 5 black spells in hand good. Failing to draw a source of black mana, McGregor made quick work of Chubaty and they moved on to the next game.

This game played almost like a replay of the first game. Once again Chubaty mulliganed, and again laid the first creature, this time dropping a Volcano Imp which McGregor immediately Hobbles. He didn't follow up the Hobble with a creature, this time, but instead followed up with a Power Armor. Chubaty pushed through with a Pouncing Kavu to drop McGregor to 13. A Goblin Legionnaire (backed by the Power Armor) and a Suffocating Blast to stop a Plague Spitter and kill the Mire Kavu all but eliminated Chubaty's offensive. Wayfaring Giant and Razorfin Hunter joined McGregor's side, and Allied Strategies nailed the coffin. It would take a phenomenal pull for Chubaty to recover. Dead Ringers wasn't quite enough.